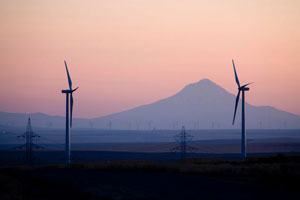 The Oregon Legislative Assembly approved a bill that will require Portland General Electric to increase the amount of energy it delivers to customers from qualifying renewable resources to 50 percent by 2040.

The bill also sets firm timelines for PGE to eliminate coal-fired generation from its customers’ energy mix no later than the end of 2035. Otherwise known as the Clean Electricity and Coal Transition plan, Senate Bill 1547-B (formerly House Bill 4036) received approval from the Oregon Senate after the Oregon House passed the bill on Tuesday.

“We were pleased to be part of a collaborative process that puts Oregon’s electricity sector on a path to achieve its state carbon reduction goals as we plan for Oregon’s energy future,” said Jim Piro, PGE’s president and CEO. “This is a sensible approach that reflects our customers’ values while maintaining the affordability and reliability of electric service.”

PGE was part of a coalition of organizations that supported the legislation, which received extensive public review in multiple state House and Senate hearings during January and February, as well as a special public meeting of the Oregon Public Utility Commission. The final bill was amended to reflect concerns raised during the legislative review process.

The legislation requires PGE to cease serving customers with power from its share of the Colstrip Generating Station, near Colstrip, Mont., no later than the end of 2035. PGE owns 20 percent of Colstrip units 3 and 4, totaling about 296 MW of generating capacity. PGE is already on track to cease coal-fired operations at its Boardman Generating Station, near Boardman, Ore., by the end of 2020. PGE’s 90 percent share of the Boardman plant totals about 518 MW of generating capacity.

PGE estimates that the new requirements could result in a cost impact to customers averaging 1.5 percent annually between 2017 and 2040. The utility will work proactively with the Oregon Public Utility Commission to manage any cost increases, making resource decisions necessary to implement the legislation through the integrated resource planning process and focusing on solutions that offer customers the best balance of cost and risk to achieve an affordable, reliable supply of electric power.

Backers of a competing ballot measure that would mandate similar renewable power and coal transition timelines, but without key consumer protections, have stated that they will withdraw the ballot measure once the new bill becomes law.