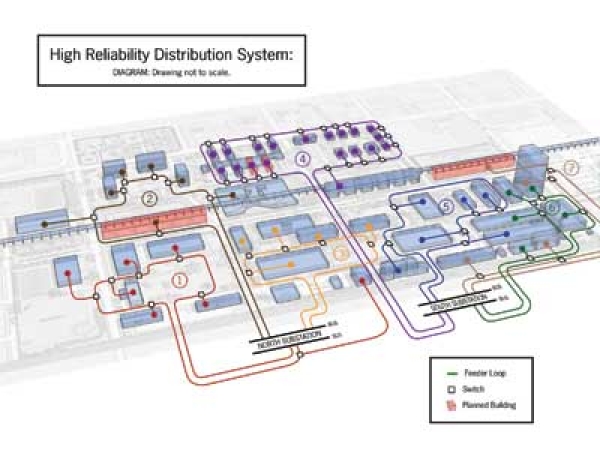 From 2004-06, Illinois Institute of Technology (IIT) experienced 12 power outages. Each cost up to $500,000. Because IIT owns the 4.16 kV on-campus distribution system, it decided in 2006 to solve its costly reliability problems by exploring advanced technology. At the same time, the university was planning to launch a major sustainability program. These issues led to an opportunity to merge reliability and energy efficiency upgrades as it investigated smart grid technology for IIT’s distribution system.

In 2007, the team submitted a $12 million proposal to the U.S. Department of Energy’s Renewable and Distributed Systems Integration program. The project launched in fall 2008. By the end of 2009, the team had achieved the first year’s milestones, as well as additional milestones.

In summer 2006, the GEI hosted a workshop on microgrids spurring innovation in the heavily regulated electric power delivery sector. IIT power engineering faculty attended to see if we could help with long-term research. At the time, IIT was experiencing three or four outages per year, with some outages costing the university roughly $500,000. In addition, the university’s load demand was increasing, and the facilities department was exploring constructing a $5 million substation on the east side of campus.

Based on the GEI microgrid workshop, an IIT follow-up meeting discussed the possibility of implementing advanced technology on IIT’s campus to address rising energy use and costs, the school’s rising carbon footprint, reliability problems and the integrating renewable sources into the campus power grid. New technology required capital. Preliminary economic analysis showed that the payback period was about five years because of the high outage costs. Hence, the Perfect Power project was launched.

Perfect Power incorporates advanced technologies including a few being developed through the research thrusts in parallel with the commercial equipment deployment.

The Perfect Power project will span five years. The first two phases are complete. In addition, the first loop of the HRDS has been installed and commissioned. Four of the core academic buildings have equipment supplying power to the building loads. The next loop of the HRDS will be installed this summer. Major construction will begin immediately after the university’s spring commencement ceremony.

First, a typical radial system appears in Figure 1. Feeder 1 serves two loads, shown by the switchgear blocks in white and the light bulbs in yellow. Feeder 2 serves one load. A de-energized alternate feeder is connected to two open switches, one at each end of Feeders 1 and 2.

If a fault occurs, as in Figure 2, then the substation breaker must open to clear the fault. All of the loads on the faulted feeder are out of service, shown by gray light bulbs. The outage could last anywhere from a few hours to half a day, assuming that the alternate feeder has sufficient capacity all the way back to the substation.

Following power loss, an electrician would be notified of the outage. In a typical distribution system, the steps required to restore power to all customers, and the time required for each step, are shown below:

Figure 3 shows the final arrangement of switches with the loads restored.

Figure 4 illustrates a major improvement to the traditional radial system presented above. An HRDS solution has the following features:

If the same fault occurs in an HRDS (see Figure 5), then the event is over in less than one-tenth of a second, and no load experiences any outage. The sequence of events is as follows:

The key innovation in the HRDS is that the entire loop remains energized during the fault scenario presented. Additional equipment is required in an HRDS beyond the typical equipment in a traditional radial system with manual switches.

Figure 6 presents the smart grid components necessary for the HRDS. The components include:

Although the HRDS solution has an upfront capital cost, those costs are earned back as the university avoids the high cost of outages, such as lost productivity, food spoilage, ruined experiments, and off-site student housing.

While the bulk of the Perfect Power project focuses on the four deployment phases, a significant portion of the funding targets several research thrusts. Three research areas will be presented briefly, including advanced distribution automation, ZigBee load control and the intelligent Perfect Power system controller.

Beyond available products, the Perfect Power team is exploring advanced, autonomous, agent-based controls for high-level distribution automation functions, including loss reduction and integration of distributed resources such as renewable solar PV generation and electronic converter storage. An example of an electronic converter storage system is a power electronic inverter system interfaced with a chemical energy conversion device, e.g., a battery or fuel cell.

To intelligently and safely incorporate distributed resources in a distribution system, an autonomous, agent-based control requires an appropriate model of the generation or storage device, as well as a communication network and framework for decision-making. If the distributed resource coordinates with the rest of the distribution feeder, then the opportunity exists to leverage the resource during normal and emergency operation, such as when a radial feeder segment is de-energized because of a fault.

Figure 7 illustrates a fault scenario on the IEEE 34 node three-phase unbalanced distribution feeder test system with additional smart switches and electronic converter storage (ECS) modules. The substation is at the left end of the feeder at bus 800. If a permanent fault occurs between nodes 828 and 830, then once the fault is cleared, switches SWI_28 and SWI_52 can be opened to isolate the fault. For the de-energized, yet unfaulted portion of the network, it might be possible for ECS 860 to supply power to some portion of the local load. Personnel safety is the No. 1 concern, so the coordination of ECS 860 and the rest of the distribution equipment is critical.

A second research thrust focuses on wireless sensor networks applied to load control. This work is led by professor Chi Zhou of IIT. The motivation for this research comes from our demand response objectives. If we need to reduce load on campus suddenly during a demand response event, then we have two options: Increase on-campus generation to reduce the overall load on the utility’s distribution grid, or curtail load on campus. If we need to curtail load, there are two methods: Shut down entire buildings via smart switches in the HRDS, or control individual loads within buildings.

Figure 8 presents a MeshBean ZigBee Mote from MeshNetics, now part of Atmel. The board contains a ZigBee radio for communication and several sensors and expansion connectors. The first applications of the ZigBee Mote include lighting and HVAC control. A research goal is to deploy a low-power wireless sensor or actuator network to interface with smaller loads distributed throughout the campus buildings. A few large loads, such as large air conditioner compressors, will be connected to a Siemens energy management building controller. Hundreds of smaller loads, however, must be monitored and controlled, which the ZigBee wireless network can do effectively and efficiently.

Some of the IPPSC’s tasks will include:

In the words of Robert W. Galvin, “Perfection is a journey, not a destination.” Transforming the U.S. power grid will be a journey with monumental change. As Perfect Power enters its second year, IIT continues looking for ways to align engineering and technical talent with society’s changing needs. The U.S. work force must be prepared to implement and sustain this change.

The Perfect Power project’s advances are helping impel the eventual power grid transformation. As it grows, Perfect Power at IIT will provide a living laboratory for advanced technology and a training ground for power engineers and technical personnel. IIT is expanding its energy programs by establishing the newly funded Smart Grid Education and Workforce Training Center. In April IIT received $5 million in American Recovery and Reinvestment Act funding to support a total $12.6 million collaborative effort to establish the center, which will offer smart grid technology courses and certification for people of all ages via on-campus and distance-learning classes.

IIT’s Perfect Power, smart grid and power engineering infrastructures will help train groups from utilities, corporations, labor unions, veterans, kindergarten through 12th-grade educators, universities, and community colleges to be the strongest work force in the world, taking on global smart grid challenges in technology, energy independence, clean tech and sustainable energy. The center will be complete within three years and is expected to train nearly 49,000 people in its first three years of operation. As IIT continues its journey, we invite you to track our progress and push for perfect power.

Alex Flueck is a professor in IIT’s Department of Electrical and Computer Engineering. Perfect Power is funded by the DOE, IIT and S&C Electric under Award DE-FC26-08NT02875 and led by IIT professor Mohammad Shahidehpour. Founded in 1890, IIT has more than 7,700 students.