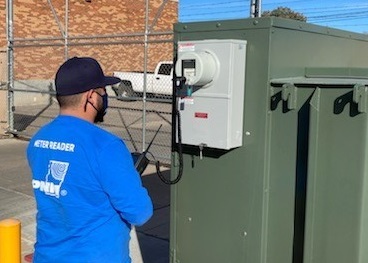 Very few know the streets in town as well as a Public Service New Mexico (PNM) meter reader. Each one walks an average of 8-10 miles per day and drives 20-40 miles per day, collectively, reading about 567,000 electric meters statewide per month.  One particular PNM meter reader recently saved a life by being in the right place at the right time and by being aware of his surroundings.

Luis Apodaca, a PNM meter reader in the Silver City area, repeatedly encountered two large protective dogs at a customer’s property with the gate locked, blocking access to an electric meter in her backyard. After speaking with the homeowner, she agreed to secure the dogs and unlock the gate the day her meter was scheduled to be read each month.

Last month, when arriving at the homeowner’s property to read the meter, something seemed off, said Apodaca. One of the dogs was out and seemed to be in distress. With his senses already heightened, Apodaca said he heard strange sounds coming from what sounded like a person in need of medical attention. At that moment, he observed the homeowner face down, with a severe facial injury, laying in a pool of blood, coherent but in need of immediate help.

The protective dog stepped aside, said Apodaca, describing it as if the dog knew that help had arrived.

Apodaca immediately called 911, grabbed his first aid kit from his company vehicle, safely administered first aid at the direction of 911, reassured the woman she was not alone and that paramedics were on their way, holding her hand telling her he cared about her. Once first responders arrived on scene, she was transported to the hospital and the PNM meter reader continued his route.

The first week of January, when Apodaca returned the woman’s home, she came out asking if it was him that helped her. After he confirmed it was him, she expressed profound appreciation for him and explained that she had fallen that day, suffered a brain bleed, fractured two ribs, broke her lower jaw, fractured her eye socket, broke her nose, and was later airlifted to a different hospital.

“I care about my community, the people in it, and we help each other,” said Apodaca. “I’m just glad I was in the right place at the right time and she survived this terrible incident.”