For more than a century, the central electricity generation, transmission and distribution business model has been to build and operate a baseload capacity to meet the maximum demand needed. This has created an inefficient system because the central power generating plant cannot be rapidly ramped up and down and electricity cannot yet be stored on a commercial scale.

By converting to a decentralized, distributed model through smart grid, the system can operate bidirectionally, taking distributed power from renewable and other clean sources and delivering it locally or regionally where it is demanded at any one time. In addition, through pricing initiatives, better control of demand can be realized to improve baseload efficiency and reduce transmission losses.

Within 25 years, most new buildings in developed countries must meet a zero-carbon standard and become truly smart. By this time with the smart grid close to completion across the developed world, utilities’ modus operandi will be to act more like a major retailer, operating a much smaller central generating capacity but with access and control over a much larger distributed generating capacity.

The utility industry needs partners and one of its largest customers: smart buildings. They can deliver distributed clean power and control demand. At the same time, they can improve the efficiency and control of energy-consuming devices such as lighting, heating and ventilation and conserve energy, further reducing baseload demand and transmission losses.

If utilities take advantage of the value-added services that will be available through operating what will become the Internet of Energy (IOE), they will prosper, trading up from a highly capital-intensive, low-margin business to a high-growth, high-tech business.

It only requires both parties to work tougher to realize the benefits to them and all the stakeholder consumers through reducing carbon emissions. The Memoori report “What is the Future Potential of the Smart Building to Smart Grid Interface Business?” demonstrates that interfacing a rudimentary smart grid with smart buildings provide-for a relatively small investment-an attractive return on investment, and there are no major obstacles to overcome. There is an overwhelming case for joining them together.

MAJOR BEMS SUPPLIERS BACK IT

It is early to pick winners, but of a list of some 40 companies Memoori compiled including recent startups, we predict five companies-including Schneider, Siemens, Honeywell, Johnson Controls and ABB-will take the major share of the installed business by year five. They are blessed with an enormous heritage estate and can deliver through all the channels to market and will monopolize the EMSCO route. Give that at least 65 percent of the business will come from the retrofit market, these strengths will deliver further leverage on the smart building side, where most of the investment will be made.

In particular, we expect Schneider Electric, Siemens and ABB to take major shares in the smart building to smart grid interface business as it develops during the next 20 years. The reason is that they have majored in building technology and electrical transmission and distribution systems for many decades and have a strong global presence. In addition, they have well-established EMSCO services businesses. Honeywell and Johnson Controls have equal capacity and capability to them in all these technologies other than electrical network management control.

There are some very attractive new-start companies that will be able to compete with the best on product capability, but they will drastically reduce the market size open to them if they don’t form alliances with the majors because they control one of the major routes to market and have strong ties with many of the major buyers.

Information technology in buildings is having a major impact on smart buildings. It is playing an important role in bringing together all the services that can improve the efficiency, safety and operation of real estates. It will not be long before it becomes an almost standard procedure at the top end of the real estate market.

In some vertical markets, convergence between the building services and the business enterprise is standard. An example is airport buildings where boarding lounges only need to be heated or cooled just prior to use. At the same time, aircraft power services, catering services and luggage handling must come together. Information on all these must be connected so they operate efficiently and in unison. Connecting to the business enterprise affects decision-making and the routes to market, and this must be considered in developing sales and marketing strategies.

The BEMS suppliers are concentrating on driving the business through delivering an attractive ROI to the building owners. In most cases, we think utilities will play a passive role in buying and decision-making. The reason is they have much to occupy their time, including the completion of their smart meter and advanced metering infrastructure (AMI) programs and improving and updating the hardware on the transmission and distribution network. We do not see this as a major bottleneck because they benefit from the integration, and the money sums are less than 1 percent of the total investment cost of smart grid. So a relatively small investment with a much shorter payback time is welcomed by all stakeholders. Utilities, however, will not aggressively drive this business for a while.

When building owners consider how to increase building productivity and operations, the chief information officer can have a major influence in deciding the software and its capability to operate within the information technology structure. Reducing the energy bill or increasing the revenue stream from exporting power is just one area they must consider.

They will set out the bid specification and decide how the components will be connected technically and commercially to suit the priorities of a particular building or group of buildings. Will smart building to smart grid interface be a separate contract, or will it be a part of a much wider information technology converged operation? Or will it be a managed solution to control the maintenance of all electrical and mechanical services, buying the energy on a performance contract for fixed price per square meter?

The three business models or contracts that will operate include:

1. Separate contract to install the smart building interface software with smart grid;
2. Include one as part of a more comprehensive information technology convergence project; or
3. A total managed energy service.

All three business models will operate on various occasions dependent on the smart building type, sophistication of its infrastructure and whether it’s a new building or a retrofit to an existing building or group of buildings. This later point is critical in the case of new buildings. The building services consultant will play a major role in setting the specification and selecting the winning bid. In most cases, a building services consultant will not be involved in retrofit contracts, and these will take more than 65 percent of the business.

There are various routes to market for smart building to smart grid interface products and service and consequent decision-making (see figure). 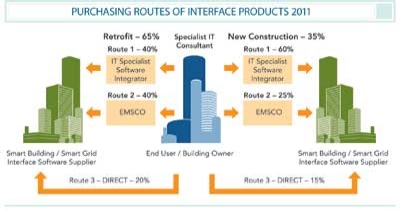 It shows the approximate proportion of business we expect to pass through each of the three channels. The chart is separated into a left half with retrofit business and a right half with new construction and major refurbishment business.

The nature of these businesses is different. As a result, the pattern of trading can differ significantly, therefore calling for separate analysis of the two halves of the model. This model establishes that the proportion of business that trades software and systems directly between the supplier and end user building owner route 3, compared with routes 1 and 2, where they would have to sell through an information technology specialist installer contractor or an EMSCO.

We estimate that new construction and refurbishment business will account for no more than 35 percent of the business during the next five years. Of this, the amount passing though route 1, the specialist information technology integrator, will amount to 60 percent. Route 2, the energy service management companies, will take 25 percent, and the balance of 15 percent will be direct business between the buyer and software supplier.

Sales to the retrofit market will take some 65 percent of the business, and here, route 3 direct sales will account for 20 percent. Routes 1 and 2 each will take some 40 percent.

We are convinced that unless the new-start software suppliers can form alliances and partnerships with the major EMSCO suppliers and BEMS suppliers, they will find it difficult to continue to grow rapidly because they will be virtually excluded from route 2 and have difficulty trading in route 1 because of the influence BEMS suppliers have in the sector with their massive heritage estates.

The report “The Smart Building to Smart Grid Interface Business 2012-2017” provides a quantitative and qualitative assessment of this growing business during the next 20 years. It assesses the potential size of this market and sets out all important factors that will shape the business in the next five years in leading countries, as well as breaking this down by product category and vertical building markets.

Allan McHale is director for U.K.-based market research firm Memoori and a blogger at http://elp.com.