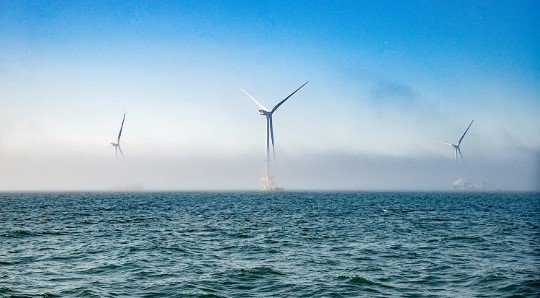 The world’s most powerful offshore wind turbines are up and running in Scotland.

The two 8.8 MW turbines form part of the European Offshore Wind Deployment Centre (EOWDC), a test and demonstration facility which has been officially opened by the First Minister of Scotland, Nicola Sturgeon.

The turbines have a tip height of 191 metres and a rotor circumference of 164 metres – larger than the London Eye.

Sturgeon said the EOWDC “will maintain Scotland’s reputation for innovation in low carbon and renewable energy development and deployment”.

“A single rotation of one of these 8.8 MW turbines will generate enough energy to power a home for 24 hours which truly shows the potential of this technology to strengthen Scotland’s renewable energy generating capacity in the future.”

The 93.2 MW EOWDC is operated by Swedish energy group Vattenfall and the president Magnus Hall said the centre will “turbocharge the growth of a global, low cost offshore wind industry – and in doing so, do much to secure a fossil fuel free future for us all”.

The EOWDC marks another milestone for Vattenfall – its inauguration means that the has crossed the 1 GW capacity mark in the UK.

“Vattenfall is in Britain to grow,” said Hall. “The success of our wind power investments over the past decade, and the ambition of Scottish and UK governments to transform the energy and transport sectors, gives us confidence in our UK future. As we forge new partnerships in heat, e-mobility, retail, power distribution and wind over the next ten-years we will be at the forefront of the UK’s decarbonization of energy.”