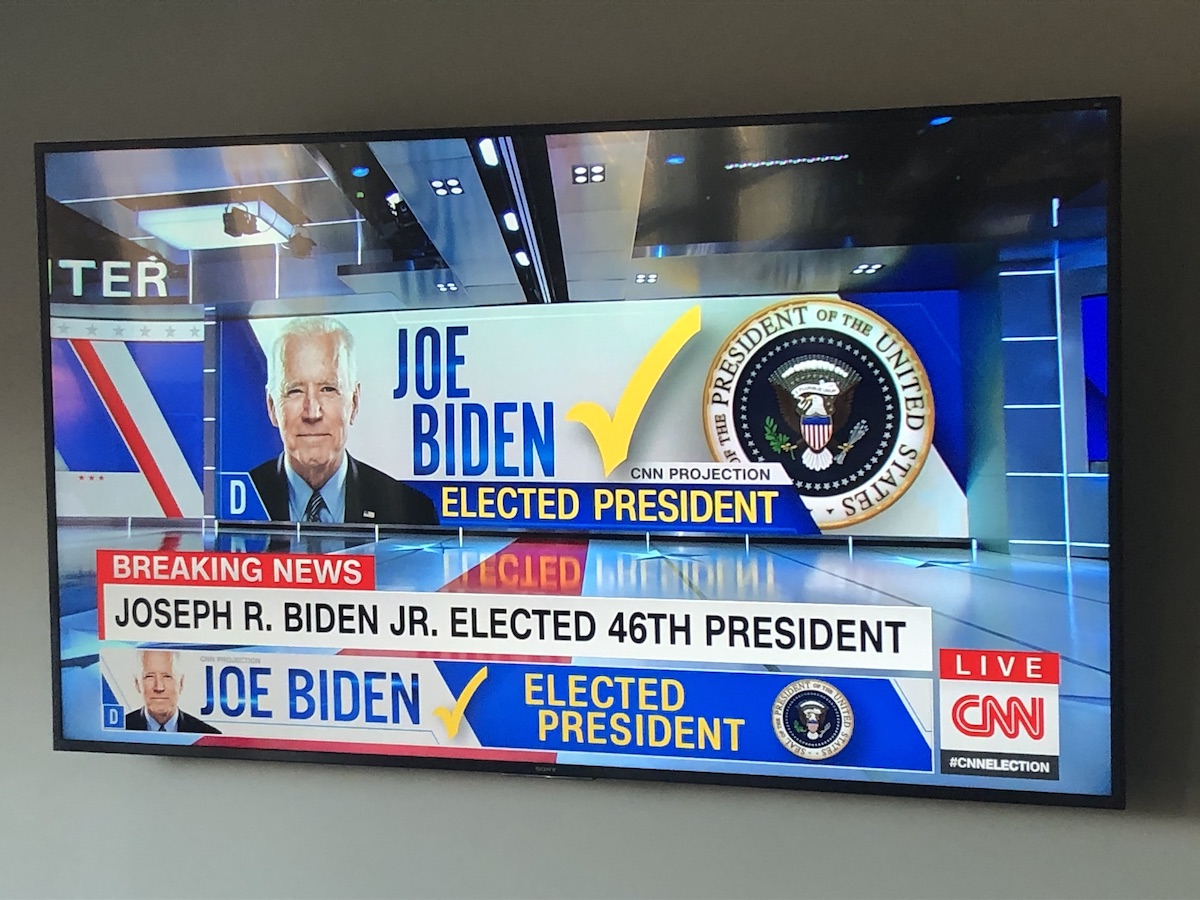 On Saturday the global clean energy industry breathed a collective sigh of relief as most major news outlets declared Joe Biden the new U.S. President-elect. Biden won the popular vote by more than 5 million but it took several days of counting ballots for him to rack up enough electoral college votes to be declared the overall winner. President Trump has so far not conceded the election.

In a speech Saturday night, Biden said he believes the American people elected him to lead by listening to science.

He has earlier stated that on day 1 he will rejoin the Paris Climate Accord, which the U.S. officially withdrew from just last week.

The clean energy industry is hopeful Biden could help lead the country back to prosperity though a long-discussed “green recovery” that would include stimulus funds tied to sustainability and clean energy as well as other policy measures that could help the industry grow.

As the news came out that Biden had won, numerous clean energy advocacy agencies issued statements.

“Biden’s victory marks a transformational shift in the commitment to renewable energy in the United States. The green energy and infrastructure plan aims to simultaneously reduce the United States’ emissions while creating millions of jobs in the renewables and renewables enabling industries. We expect material incentives for companies to develop renewable energy solutions and the outlook is very positive for existing asset owners who have development pipelines in the US. Biden also plans to return to the Paris Climate Accord as a public statement of commitment and intent.”

“I want to personally congratulate Joe Biden for his apparent victory in the 2020 presidential election. President-elect Biden’s plan to combat climate change enables our industry to create hundreds of thousands of well-paying jobs across the country. We look forward to working with his administration and Congress on policies that reduce carbon emissions including tax policies that pave the way for greater adoption of solar energy and energy storage.

“We appreciate that the President-elect’s plan to advance clean energy incorporates environmental justice. And we share his belief that the United States must be ambitious on an unprecedented scale to meet the climate challenge.

“I also want to congratulate Vice President-elect Kamala Harris on the historic nature of her election and all who won election to Congress. Solar consistently has a 90% approval rating and the majority of Americans on a bipartisan basis support taking action on climate change. Solar power creates jobs in red districts and blue districts alike and improves the environment. This year we met frequently with lawmakers on trade, tax and energy policies and I believe we have a highly constructive relationship with congressional leaders across party lines.

American wind power congratulates President-elect Biden on his victory. We look forward to collaborating with his administration and Congress as we work together to shape a cleaner and more prosperous energy future for America.

The President-elect and his team have laid out”¯an ambitious, comprehensive approach to energy policy that recognizes renewable energy’s ability to grow America’s economy and create a cleaner environment, while keeping electricity costs low and combating the threat of climate change.

The U.S. wind sector and its growing workforce of over 120,000 Americans stand ready to help put that plan into action and support the Biden administration in delivering on the immense promise of renewable energy to add well-paying jobs to the U.S. economy and reach the President-elect’s 100% target for a carbon-free America by the middle of this century.

By electing Joe Biden as President of the United States of America, Americans have sent the signal to accelerate the path forward toward a clean energy economy. We expect to see strong support from the new Administration focused on decarbonization of the electric and transportation sectors, which will further drive the deployment of energy storage. We look forward to working with the Biden Administration and Congressional members to continue our bipartisan efforts to advance our vision of 100 GW by 2030, creating a more resilient, efficient, sustainable, and affordable electricity grid.

— Kelly Speakes-Backman, CEO of the US Energy Storage Association

“The American Council on Renewable Energy (ACORE) congratulates President-elect Joe Biden for his victory in this historic election. The nation’s renewable energy sector looks forward to working with the new Administration and Congress to realize the clean energy future that Americans want, and scientists say we need.

“We commend President-elect Biden for his pledge to rejoin the Paris Climate Agreement immediately. The time has come for the U.S. to move beyond climate denial and resume a global leadership role in the fight against climate change.

“An accelerated transition to renewable power provides both climate protection and economic prosperity. With more than $60 billion in annual investment, and two of the nation’s fastest-growing job categories – wind turbine technician and solar power installer – renewable energy can help power America’s economic recovery, as it did in 2009.”

— Gregory Wetstone, President and CEO of the American Council on Renewable Energy (ACORE)

“The US must now prove it can be taken seriously in the climate change fight by immediately re-entering the Paris Agreement, humbly working with global leaders on bolder climate ambitions and a global Just Recovery from COVID-19, and domestically taking rapid steps towards bold, comprehensive climate action. There is no more time to waste on climate. It’s time for the US to phase out existing fossil fuel extraction and implement a Green New Deal that protects communities, workers and the economy by developing a roadmap to transition us away from coal, oil, and gas and towards equitable energy democracy. It’s time for the US to prioritize climate justice for Black, Indigenous, and communities of color most impacted by climate breakdown. The US must shift finance flows out of a fossil fueled past and toward solutions that will help us secure a livable future for all.”

Even leaders outside of the U.S. weighed in

“President-elect Joe Biden’s election victory is good news for climate action. After observing several years of climate denial and policy rollbacks, we welcome this new administration and its plans to build a more sustainable economy”.The president-elect’s proposed climate and jobs plan joins commitments from around the world from countries like Germany, South Korea and the United Kingdom, which have all poured billions into a cleaner global recovery.

Canada’s federal government said during the recent Throne Speech that climate action would be a ‘cornerstone’ of its economic recovery. Canada must now follow through on these commitments in order to capitalize on shifting global markets while creating opportunities for Canadian exports, from renewable power to sustainable metals and minerals to clean technology.

In the meantime, we look forward to welcoming the United States of America back into the Paris Agreement in January.”