Emphasis on implementing energy efficiency programs and limiting peak-demand growth has renewed interest in the most effective method to implement volt/VAR control on distribution systems.

This includes the implementation of conservation voltage reduction (CVR), in which the system demand is reduced through controlled reduction in operating voltage at customer load points. Effective CVR implementations typically reduce demand 2 percent to 4 percent.

The basis of the dynamic operating model of the distribution system is typically the distribution connectivity model as found in a distribution organization’s geographic information system (GIS). The model is adjusted in the utility’s control room through operator action or an interface to the supervisory control and data acquisition (SCADA) system, which transmits changes in the status of system components. System components that can change states include distribution breakers, switches, reclosers, fuses, jumpers and line cuts.

The benefit of using a dynamic model is that the VVO always uses the as-operated state of the network. As outages and system reconfigurations occur, the network maintains proper connectivity of loads, capacitor banks, regulators and other feeder components. This ensures the determination of the voltage regulator taps, load-tap changer taps and switched capacitor states always uses the present operating configuration of the system. 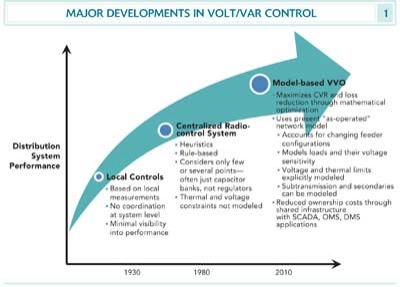 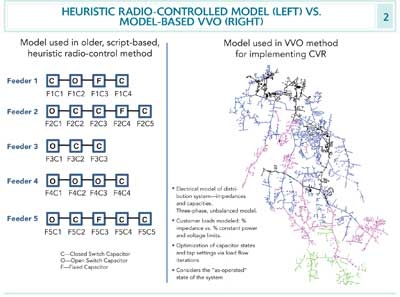 Model-based VVO uses unbalanced load flow (UBLF) and load allocation (LA) applications to obtain the starting network state. It also invokes UBLF to provide sensitivity (gradient) factors, obtain intermediate solutions in the voltage control iterations and check the feasibility of candidate solutions. The UBLF application is required—as opposed to a balanced load flow application—because of the numerous single-phase loads that are typically on a distribution system, as well as single-phase laterals that can have controllable regulators and capacitors.

To model a distribution network’s behavior accurately, a detailed network model is used. Phase-based models are used to represent every network component. Loads or capacitor banks can be delta or wyes-connected, as shown in Figure 3. Transformers can be connected in various delta/wyes and various secondary leading/lagging configurations with or without ground resistance, with primary or secondary regulation capability, as also shown in Figure 3.

Voltage and VAR controls can be ganged or unganged. The method works on radial and meshed networks with single or multiple power sources. Voltage controls are enforced for each phase using phase-to-ground or phase-to-phase voltage, depending on the connection type of the load. Any regulators or capacitor banks that are temporarily disabled because of maintenance or operational issues can be excluded temporarily from the analysis.

Model-based VVO considers the voltage-dependent component of individual loads to model the reduction in demand vs. reduction in voltage. The optimum settings depend on the location and mix of constant power and impedance loads.

Integration With Smart Grid and Benefits

Model-based VVO is just one application of an advanced distribution management system. Once implemented, the infrastructure and resources needed for model-based VVO can be leveraged to provide other distribution management system (DMS) functionality. These resources include the network model, which also is used in the outage management application, SCADA, communications and the servers and hardware infrastructure. Additional DMS functionality that can be added incrementally includes self-healing (automated restoration switching analysis), unbalanced load flow, fault location and overload reduction switching.

Automatic fault location and automated switching and restoration schemes, which are being implemented more frequently, reconfigure the distribution system, changing the location of loads, voltage regulators and capacitor banks. Older-generation, rule-based volt/VAR methods were not able to account for the system changes. The model-based VVO accounts for these reconfigurations explicitly and automatically without change in the control optimization algorithm and permits determination of optimal switched capacitor states and voltage regulator settings as the system changes.

Model-based VVO also will help distribution organizations deal with increasing amounts of renewable generation. Distribution organizations already are experiencing the voltage fluctuations caused by distribution-connected renewable generation. This is especially true for single-phase, residential photovoltaic systems being deployed on many distribution systems. Model-based VVO already models generation sources and can be adapted to model and control reactive power from renewable sources. Where standards and operating practices permit, it also will be possible to model and control distributed generation voltage.

As AMI meters and cost-effective remote voltage-sensing devices continue to be deployed at load points, additional end point voltage readings will be available to the optimization routines. Because the model-based volt/VAR uses an as-operated connectivity model of the distribution system, the algorithm will have the correct connectivity of each of these end point devices as feeder configurations change. This is a limitation with script-based algorithms.

Summary of the Model-based VVO Algorithm

Minimize a weighted sum of: [(energy loss or MW load or both) + voltage violation + current violation]

Subject to the following engineering constraints:

Tim Taylor is Ventyx’s industry solution executive; Ventyx is a part of ABB.