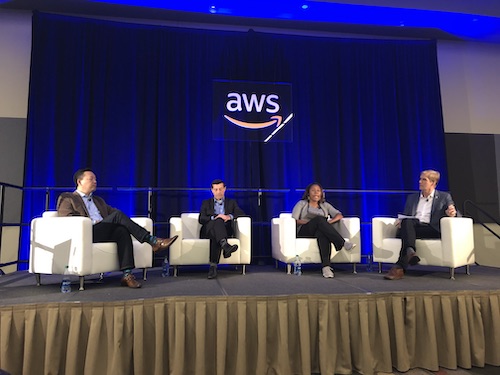 The live webcasts covered key trends in the industry today and were spot on in terms of presenting solutions to issues that are plaguing utilities today.

Moving to the cloud

Samara Moore, Security Assurance and Global Energy Specialist at AWS is a former director of Infrastructure Cybersecurity for the White House and Sr. Cybersecurity Advisor at the Energy Department spoke about the security of the AWS cloud. She was followed by Jerry Casarella, Chief Architect, Public Service Electric & Gas. Casarella explained that PSE&G has migrated about 1/3 of its data center into the cloud and said the utility is continuing to put more and more in it.

John Kochavatr, Chief Information Officer, Portland General Electric explained that for PGE the cloud is important for its elasticity. He said on a normal day, the company’s website might see 100 or so users but during a major event, that number could spike to 100,000 users easily.

“So the elasticity of the cloud really helps,” he said.

In addition, the costs are much lower than what it would take for the utility to build its own data centers. Kochavatr said when he was first IT solutions, his quotes were in the 8 figures but moving to the AWS solution was much more cost-effective.

Cassarella explained that PSE&G is now leveraging cloud analytics, which is an exciting job for millennial data scientist. He said that the utility has hired recent college graduates and found that data mining and analytics is quite exciting to them. He said if he gives them something to analyze often they will work on it all night long getting to the results.

Following the AWS webcast, Carol Johnston, VP of Product and Marketing at Clevest and Brian McMillin, Technology Manager – Customer Services Field at Southern California Gas presented on the ease and importance of using a mobile workforce management solution during disasters.

According to Johnston, there are multiple billion-dollar weather and climate disasters in 2018 and 2019 and interestingly the cost to prepare for a disaster is equal to the cost to go through one. That means that in some cases, utilities that thought they were going to be hit with a major event but weren’t still incurred millions of dollars in costs.

Managing costs incurred by mutual aid workers was a big topic of the discussion and Clevest showed how its tool helps capture meal receipts, assign hotels and communicate with those workers that come in from other places to help restore service when disaster strikes. In addition, the tool can help with public relations during storms because it pinpoints exactly where restoration activities are taking place.

Part demo, part case study, the Clevest live webcast on disaster management was an important topic for today, with earthquakes, hurricanes, typhoons, wildfires and more striking with increasing frequency across the world.