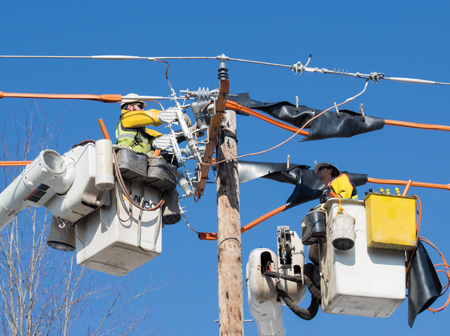 The name of the game in electricity transmission and distribution, like any industry, is to deliver, whatever the challenge. The annual Projects of the Year award winners, as well as their runners-up, were honored for their efforts to try new things in delivering both information and power to customers under any and all circumstances.

The editors of POWERGRID International magazine, the official publication of the DistribuTECH Conference & Exhibition held last month in Orlando, and its parent company PennWell Corp. recently announced four winners for the annual electric utility Projects of the Year. Editor in Chief Teresa Hansen revealed those winners live Monday evening, Feb. 8, during the DistribuTECH Awards Dinner at the Hyatt Regency Orlando.

The winners in four categories-Grid Optimization, Renewable Grid Integration, Demand Response/Energy Efficiency and Customer Engagement-spanned from Hawaii to the Atlantic Coast, from the hearty Midwest U.S. to the heart of Texas. They were joined by runners-up from Canada, California, New York and New England.

PPL Electric Utilities won the 2016 Customer Engagement Project of the Year award for its Universal Outage Alerts. This project was built on a smaller previous effort, but this time included all of its 1.1 million residential customers.

PPL’s assets and customers endure all that a Pennsylvania winter and summer can bring down. PPL’s Universal Outage Alerts was built to let customers know immediately that PPL is aware of a particular outage affecting them. Customers know when the power was out even if they are away from home.

“Our proactive outage alerts have received a strong positive response from customers, and we appreciate this industry recognition as well,” said Christopher Cardenas, PPL’s customer services vice president. “We continue to look for ways to improve our service, keep customers informed and make doing business with PPL as convenient as possible.”

PPL’s Universal Outage Alerts also works to significantly improve the accuracy of estimated restoration times. When outages happen, customers want to know that PPL Electric Utilities is aware of it, what caused it, how bad it is and when it will be fixed. PPL’s goal was to give that information to them quickly, when they needed it the most, and it Universal Outage Alerts does that.

Nuance was PPL’s principal partner on the project.

The joint venture has been honored by numerous organizations for its planning, implementation and results. National Grid installed 55 WeatherBug stations at schools, public safety and community buildings throughout its service territory. These data points help by providing real-time alerts, forecasts and sharpen response and outage restoration efforts.

“At National Grid we are focused on leveraging technology and innovation to create better outcomes for customers every day,” said Terry Sobolewski, National Grid’s chief customer officer. “We are excited about this joint project and the potential jump in preparedness it will give our customers during the Northeast’s very tricky and unpredictable storm seasons.”

Overall, Maryland-based Earth Networks has thousands of sensors operating at schools, parks and other sites throughout the country.

In April 2015, CenterPoint Energy joined the U.S. Department of Energy and vendor ABB to complete the Advanced Metering and Intelligent Grid Initiative, which dramatically improved the reliability and efficiency of the Houston power grid.

The DistribuTECH awards ceremony honored CenterPoint with its Grid Optimization Project of the Year last month, but this mission actually started five years earlier. CenterPoint then was awarded a $200 million Smart Grid Investments Grant to benefit customers and the environment through the advanced metering system and intelligent grid initiatives.

“CenterPoint Energy continues to lead the nation in economically implementing smart grid technology,” said Kenny Mercado, senior vice president of electric operations for CenterPoint Energy. “The future of delivering energy presents opportunities and challenges on many fronts, and CenterPoint Energy has continued to identify and implement sustainable solutions while delivering safe, reliable and environmentally responsible energy to meet the needs of our customers today and in the future.”

The Intelligent Grid has at its heart an advanced distribution management system developed by ABB. The goal was to improve service to the utility’s 2.3 million metered customers.

Altogether, the initiatives involved a lot of groundwork-installing 31 substations and 859 intelligent grid switching devices on more than 200 distribution circuits. This multi-faceted deployment made it what ABB called one of world’s largest advanced distribution management systems (ADMS) in operation.

Since 2011, the ADMS has reportedly helped the utility’s customers avoid more than 100 million outage minutes.

CenterPoint Energy estimated that, as a result of the Intelligent Grid, the utility’s power reliability improved by more than 28 percent over the past year.

RUNNER-UP: The editors selected BC Hydro’s unique Downtown Vancouver Automated Open Loop as the Grid Optimization runner up project. This massively detailed project is only getting started in downtown Vancouver, which has 472 primary vault customers with a total of 90,000 customers.

Cheong Siew, BC Hydro’s manager, distribution automation and strategic planning in the transmission, distribution and customer services’ asset investment management business group, predicted that the project will “forever improve” electricity delivery to customers and safety to workers on the system.

“We have already begun to utilize the building blocks of this project in other parts of the underground system-when manual livefront switchgear are at end-of-life and when expanding to serve new load-to add protection along the feeder trunk and to provide fast tripping for arc flash and blast hazards,” Siew said. “We also hope that the collaboration we have built with our partners S&C, SEL, Subnet and Powertech will continue to provide benefit to other utilities that have the same safety and reliability objectives as BC Hydro.”

The winner was Duke Energy Ohio’s Hà…M Energy Manager. The utility hailed this as one of the industry’s first integrated demand response and energy efficiency programs. Based on two-way communication between customers and the utility, Hà…M Energy Manager offers up two free Wi-Fi-connected smart thermostats for each participating household, multiple tiers of interaction and a mobile portal that could be accessed from a smartphone, tablet or computer.

The goal is to provide relevant, personalized information to each customer, along with tips on how to make smart, specific decisions affecting heating and cooling consumption and spending. Customers can access personal home energy usage data and trends relative to similar homes. They also have at their fingertips remote HVAC control with suggested reset programs and customized energy savings tips. When demand for electricity peaks, a wireless signal can turn the compressor of the air conditioner on and off.

“Consumers expect more from their service providers and that includes their utilities,” said Sasha Weintraub, Duke Energy’s senior vice president of customer solutions. “Today, our business is about more than an obligation to keep the lights on. It’s also about giving our customers more control, convenience and options for managing their energy usage and spend, and that’s the value our customers get with our Hà…M Energy Manager program.”

As a Hà…M Energy Manager user, customers also can select a level of participation in an automated electricity conservation program that can occur on up to 10 hot summer days, allowing Duke to create a capacity resource for both peak and base load reduction.

Duke Energy Ohio maintains an active role in this two-way communication. On selected days from May through September, the utility automatically cycles off and on the compressors of participating customers’ central air conditioners and heat pumps, helping balance the region’s electricity demand. These events are known as “conservation periods.”

The utility’s primary vendor and implementer on this project was Comverge.

The intention is to test certain aspects of integrating demand response with the wholesale market. Those registered into the wholesale market as a proxy demand resource must include customers served by a single load-serving entity that can achieve a minimum load shed of 10kW for at least four hours.

“Pacific Gas and Electric’s Supply-Side Pilot (SSP) represents an innovation in the evolving market for demand response,” said Olivine CEO Beth Reid. Olivine operates the utility pilot project on behalf of PG&E. “The success of the SSP demonstrates the ability for demand side resources to act as supply and provide market-based grid services. This outcome offers increased grid reliability and tremendous added value to utilities and their customers.”

Like the ISO markets, the pilot is operational 24 hours a day, 7 days a week. By August 2015, the pilot already had 1,150 successful bids and more than 270 awarded hours dispatched.

Hawaiian Electric Co. took first place with its massive rollout of in-line power regulators (IPRs) to deal with the equally fast-growing integration of rooftop solar in that state. The rollout helps circuits deal safely with all that solar PV coming online.

For example, since rooftop PV systems provide little or no information to system operators, maintaining the steady 60 Hz frequency needed for reliable power delivery is increasingly difficult, according to a story about the rollout on Hawaiian Electric’s website. A circuit that is saturated with PV also strains the grid as it adds electricity when demand isn’t there. This causes voltage on the affected circuits to be higher than intended, sometimes sending power flowing back through transformers to substations not designed to support it.

“We work in concert with our planning groups within Hawaiian Electric to investigate new technologies and products, such as the Gridco Systems In-line Power Regulator, to better see and manage what’s happening on the grid,” said Dr. Dora Nakafuji, director of renewable energy planning for Hawaiian Electric, in a statement.

In February 2015, crews installed pole-mounted IPRs on an overhead line identified by Gridco’s modeling team, in collaboration with Hawaiian Electric engineers, as having voltage issues due to high rooftop PV penetration.

“With high-penetration PV on our lines, we see high voltage or back-feed conditions on some circuits,” Nakafuji said. “The Gridco IPR allows us to see what is actually happening right at the pole that serves a cluster of customers. At the same time, it allows us to regulate voltage at that location as needed, based on how much power the PV systems are producing and power consumption by customers at the time of day.”

The IPR bucks or boosts voltage at a particular site, depending on what is needed at the time. It also allows the utility to continue integrating more renewable generation onto the distribution circuits. This can be done without costly re-conducting or trenching work to upgrade line equipment.

Hawaiian hopes to achieve 100 percent renewable energy by 2045. As this goal progresses, its IPRs could play a vital role to keeping the delivery system reliable and safe.

“The adoption of solar by SDG&E customers over the last few years has been monumental in San Diego and, until now, the impacts of these have been unknown in real-time electric operations,” SDG&E’s Chris Hirsch, the ADMS Phase III project manager, said. “This project provided incredible visibility on the impact of all of San Diego’s renewable generation on real-time distribution management and allows SDG&E to manage the grid more efficiently.”

SDG&E had more than 60,000 rooftop-solar customers as of last year. It also achieved a new company record of 1,042 MW of utility renewable generation in August.