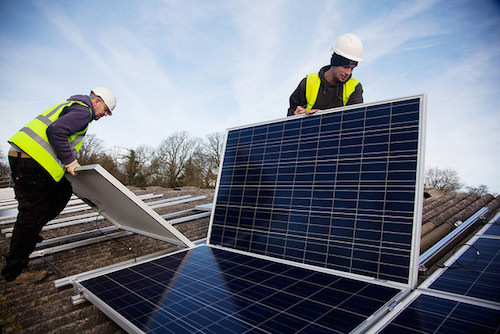 Today, Sunrun and Vivint Solar announced that Sunrun will acquire Vivint in an all-stock transaction. Vivant Solar common stock will be exchanged for 0.55 shares of Sunrun common stock, representing a combined Enterprise Value of $9.2 billion based on the closing price of Sunrun’s shares on July 6, 2020.

Both companies are big players in the residential solar space, with similar business models. Essentially, they sell, install and, in some cases own and maintain, residential rooftop solar arrays and collect monthly payments for customers. Generally, these payments are lower than what the customer pays for utility electricity.  The companies say they have a “shared mission to create a planet run by the sun.” Together, their combined customer base is nearly 500,000, they said in a joint press release, for a total combined solar capacity of more than 3 GW.

According to the companies, residential solar has reached only 3% penetration in the United States today and the runway for growth remains massive.

The acquisition of Vivint Solar adds a complementary direct-to-home sales channel to Sunrun’s platform, it says.

As one company, the opportunity for cost savings exist across the board, including

The companies say they expect to be able to offer batteries to the combined base of solar customers, which could mean larger participation in the wholesale electricity market, which Sunrun began dabbling in last year with its approved bid to supply 20 MW of residential solar + storage capacity into the New England ISO Forward capacity market for 2022-2023.

“We expect to benefit from efficiencies in large scale project finance capital raising activities and are excited about the opportunity to build an even stronger and more recognizable consumer brand in residential energy services,” they said in the press release announcing the acquisition.

“Americans want clean and resilient energy. Vivint Solar adds an important and high-quality sales channel that enables our combined company to reach more households and raise awareness about the benefits of home solar and batteries,” said Lynn Jurich, Sunrun’s Chief Executive Officer and co-founder. “This transaction will increase our scale and grow our energy services network to help replace centralized, polluting power plants and accelerate the transition to a 100% clean energy future. We admire Vivint Solar and its employees, and look forward to working together as we integrate the two companies.”

David Bywater, Chief Executive Officer of Vivint Solar, added, “Vivint Solar and Sunrun have long shared a common goal of bringing clean, affordable, resilient energy to homeowners. Joining forces with Sunrun will allow us to reach a broader set of customers and accelerate the pace of clean energy adoption and grid modernization. We believe this transaction will create value for our customers, our shareholders, and our partners.”

Under the terms of the definitive transaction agreement, each share of Vivint Solar common stock issued and outstanding immediately prior to the effective time of the merger will be converted automatically into the right to receive 0.55 shares of Sunrun common stock.

The Board of Directors of Sunrun and Vivint Solar have each unanimously voted in favor of the definitive transaction agreement.

The acquisition of Vivint Solar is expected to be completed during the fourth quarter of 2020, subject to approval by Vivint Solar and Sunrun stockholders, regulatory approvals and other customary closing conditions.

Sunrun’s Board of Directors will be expanded by adding 2 directors, one of which is expected to be Vivint Solar’s CEO, David Bywater.