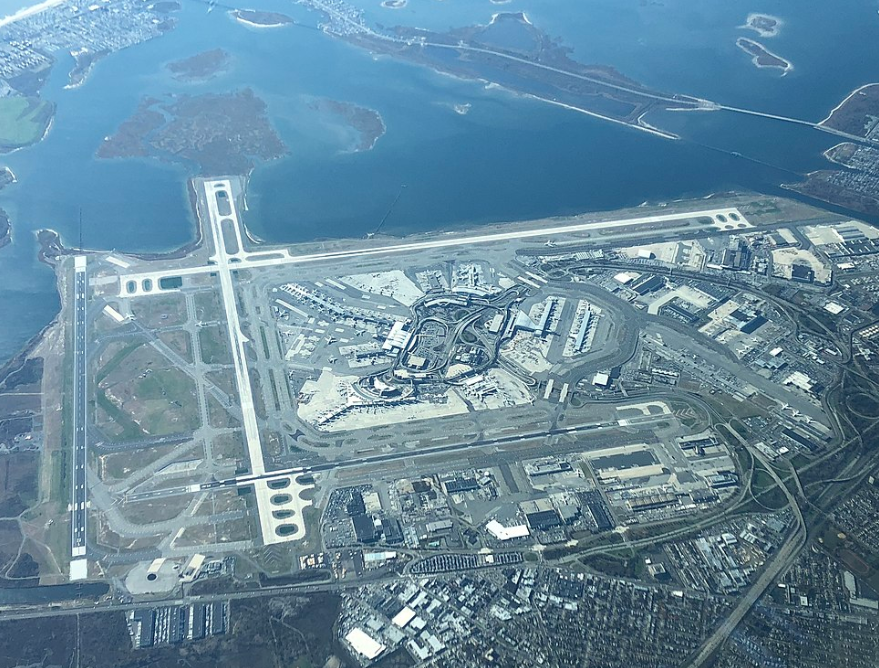 Developed in partnership with the New York Power Authority, the JFK International Airport Solar Photovoltaic Project will generate about 13 MWs of onsite solar and about 7.5 MWs of battery storage, including a 6.1-MW community solar generation facility.

The rest of the solar energy produced will be used onsite at JFK, offsetting the Port Authority’s purchase of conventional electricity sources. In addition to being the single-largest solar project in New York City, it is the largest planned community solar project at an airport in the United States.

The installation is a key element in the Port Authority’s aggressive effort to implement solar and other renewable energy sources to its power operations and reflects the agency’s commitment to the Paris Climate Agreement. It is expected to reduce JFK greenhouse gas emissions by about 6,699 tons annually, the equivalent of taking 1,422 cars off the road each year.

“As the first transportation agency in the country to embrace the Paris Climate Agreement, the Port Authority is committed to integrating clean energy technology at all of its facilities,” said Port Authority Chairman Kevin O’Toole. “The Port Authority is excited to be part of this collaborative effort bringing together community stakeholders, government and private business to advance our regional sustainability goals.”

“Equipping our essential transportation facilities with renewable energy sources and equipment is key to reducing our carbon footprint across the agency,” said Port Authority Executive Director Rick Cotton. “Using best-in-class technology, the installation of these solar panels will help us bring the airport up to 21st century standards and enable the communities neighboring JFK to benefit from these clean energy installations.”

“The Port Authority and NYPA, working with the Public Service Commission, are leading the way in constructing and enabling solar development in New York,” said Port Authority Director of Environmental and Energy Programs Christine Weydig. “With this record-setting system, our neighbors at JFK will have access to local, renewable energy, and the Port Authority will advance its greenhouse gas reduction objectives.”

“This innovative solar development at JFK is on a scale unprecedented in New York City, not to mention nationwide,” said NYPA President and CEO Gil C. Quiniones. “NYPA is proud to be a partner in such a trailblazing project that will help JFK significantly reduce its greenhouse gas emissions while supporting Governor Cuomo’s green energy goals. The fact that the installation will also provide affordable renewable energy to the local community makes this a sustainable good-neighbor project worthy of replication by other facilities.”

“This is a landmark project that we are excited to support, and we commend the Port Authority and the New York Power Authority for bringing clean, affordable energy to JFK and the surrounding community,” said Jon Yoder, head of Goldman Sachs Asset Management Renewable Power Group.

The project encompasses Building 141 and Long Term Parking Lot 9. Building 141 will host about 1 about of rooftop solar, and Lot 9 will host more than 13 MW of solar and nearly 7.5 MW of energy storage. The projects will reduce the airport’s demand for fossil fuel-generated electricity and add resiliency to the AirTrain system. In total, this project will reduce the Port Authority’s greenhouse gas emissions at JFK by nearly 10 percent.

Additionally, the electricity provided to the grid through this project will provide small business and residents near JFK the opportunity to utilize renewable energy at discounted prices.

BlueWave Solar will assist in providing the surrounding airport community with affordable access to clean electricity produced by the solar system by managing the associated subscriptions and billing.

The JFK renewable energy program is part of the Port Authority’s goal of reducing the agency’s greenhouse gas emissions by 35 percent by 2025 and advance its long-term goal of an 80-percent reduction in all emissions by 2050. The Port Authority became the first public transportation agency in October 2018 to adopt the Paris Climate Agreement, committing to such aggressive goals.