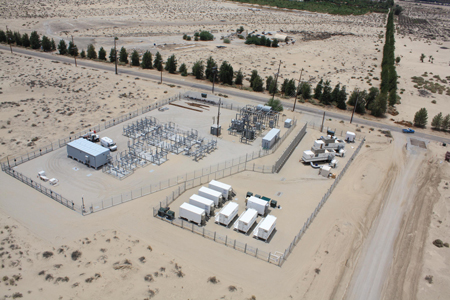 (Above: The Borrego Springs microgrid project, photo courtesy of SDG&E and Sempra Energy)

North America has regained its claim from Asia Pacific as the leading region in global microgrid capacity with a 42 percent market share, according to a new report from Navigant Research.

A new report from Navigant Research measures data on known grid-tied and remote microgrid projects in the proposal, planning, and deployed stages across six geographies, with details on capacity, project numbers, and rankings.

Microgrid deployments continue to increase globally, and as of 2Q16, Navigant has identified 1,568 projects representing more than 15 GW of capacity in the tenth edition of its Microgrid Deployment Tracker. Since the last update, 148 projects were added to the database, accounting for nearly two GW of capacity, over half of which was located in North America.

“The remote microgrid segment’s growing dominance in the microgrid market shows the increasing visibility in the Middle East and African region as well as the Latin American and Asia Pacific regions where remote microgrids are common,” says Adam Wilson, research associate with Navigant Research. “Additionally, one-fourth of new capacity coming from utility distribution microgrids shows the markets gradual and continuing shift of microgrid developers looking more to utilities instead of traditional third-party vendors.”

The three most noteworthy additions to the 2Q16 Tracker include a 200 MW proposed solar PV microgrid addition in Senegal, a 202 MW deployment in Sampolo on the island of Corsica, and a 211 MW portfolio added across the United States by Blue Pillar. In terms of vendors, according to the report, Siemens moved past ABB to lead in terms of total microgrid capacity, while Schneider Electric retained the lead in terms of total number of microgrid projects.