POWERGRID International editors recognized two winners of the magazine’s Brazilian Projects of the Year on Sept. 26 during DistribuTECH Brasil. Editor in Chief Teresa Hansen presented the awards to Eletrobras Distribution Cos. for its Parintins Smart Grid Project and AES Eletropaulo for its Digital Project during the event’s closing award ceremony.

This year’s Brazilian Smart Grid Projects of the Year award winners differ much from one another.

Still, the projects have a few similarities. Both show that with good planning and management and the proper technologies, challenges can be overcome and efficiency, operation and customer service improvements are possible no matter the location.

Parintins is a remote island city surrounded by the Amazon River in the state of Amazonas. Some 420 miles downriver from Manaus, the capital of Amazonas, it is served by an isolated grid. Electricity delivery was not as reliable as Eletrobras and its customers in the area would have liked, nontechnical loss (electricity theft) was high, and much of the electricity was generated by environmentally unfriendly, diesel-fueled plants.

Eletrobras’ technical goals for the smart grid project centered on developing a cooperative reference model that all six distribution companies could use. The utility chose Parintins because dealing with its challenges would require technological solutions that, once proven, could be used across Eletrobras’ entire distribution service territory. Eletrobras plans to implement the project through all of Parintins, which has some 16,000 customers and 300 distribution transformers. Upon completion of the project, the city will be the first in Brazil to have all customers connected to smart meters.

“Smart grid represents a leap from the conventional, one-direction analog grid and distant energy sources to a bidirectional digital network with diversified and distributed energy sources,” an Eletrobras spokesman said of the project.

Smart meters built and installed by Brazilian meter manufacturer ELO Sistemas Electràƒ³nicos and equipped with U.S.-based Echelon Corp.’s multipurpose expansion port are central to the Parintins Smart Grid Project. The meters have dual-mode smart two-way information flow over a 900 megahertz radio frequency mesh network, as well as power line. The dual communication technologies are required to connect to all customers.

The installed smart meters act as sensors in the distribution network and allow Eletrobras and ELO to detect and immediately intervene in the event of a power failure or line tampering. The meters also send information to consumers, allowing Eletrobras to apply time-of-use rates to encourage consumption during off-peak demand. The meters have given Eletrobras better control of demand and a way to combat nontechnical losses through remote disconnect and reconnect.

As of May, ELO had installed and deployed 3,500 smart meters, and it plans to deploy another 12,000 as part of the project, said Bruno Maccari, ELO Sistemas Electràƒ³nicos business development systems coordinator, during a DistribuTECH Brasil presentation.

To date, the project is meeting its goals of reduced technical and commercial losses, increased security and improved quality of service.

ELO issued a press release earlier in the year with statements by Marcos Rizzo, vice president of business development.

“Meeting or surpassing the Eletrobras Parintins project goals for reduced losses and improved quality of service has been extremely satisfying,” Rizzo said. “Parintins will be the first Brazilian city with 100 percent of the customers with a smart meter installed.”

The Parintins Smart Grid Project also calls for distributed microgeneration. Eletrobras expects more than 40 rooftop photovoltaic (PV) systems of 3 kW each to be installed by May, resulting in some 120 kW of PV generation across the distribution system. The PV systems’ performance will be monitored automatically through a remote system that will include a weather station with a data acquisition system and a database of smart meter readings for each PV system.

ANEEL, Brazil’s electricity regulatory agency, approved a resolution in April that allows Brazilian consumers to generate power on the distribution level through distributed microgeneration and minigeneration. The Parintins project will provide insights on real-life impacts of PV generation on the low-voltage grid. The study also will show how the smart grid infrastructure can be used to provide a new service to customers: monitoring distributed PV generation. With dozens of isolated diesel grids in northern Brazil, PV generation is economically viable, Maccari said.

The Parintins Smart Grid Project is going well, and Eletrobras, ELO and Echelon have learned a lot. Nevertheless, the project has brought challenges, Maccari said.

Locations and logistics have created some of the biggest challenges. It takes 45 to 60 days to transport equipment from manufacturing facilities in southern Brazil to Manaus, Maccari said. From there, it takes several more days to ship the equipment up the Amazon River to Parintins. He said it takes 150 to 180 days for cable to be delivered to Parintins once the company orders it. The project schedule must be accurate and be followed closely to prevent transportation issues that could slow the project.

Besides logistic issues, the location creates another issue. The Amazonas rain forest is hot and humid, and installing and operating electronic devices in this climate has been challenging, Maccari said.

In addition, because six distribution companies are involved and have stakes in the project, he said, there have been challenges in deploying systems and technologies that will meet all the companies’ needs and requirements.

Other obstacles unique to Parintins have slowed progress, such as hard-to-reach or improperly installed meters.

In a few cases, new meters must be installed creatively in buildings and structures that cannot be modified because of their artistic or historic features.

AES Eletropaulo is a Brazilian electricity distribution company that provides electricity to 24 municipalities in Sao Paulo state, including the city of Sao Paulo, the largest city in the southern hemisphere. The company serves some 6 million customer premises and a population of nearly 16.5 million throughout its 4,562-square-kilometer (1,761-square-mile) service territory. It operates 43,000 kilometers (nearly 27,000 miles) of distribution network, 1,700 kilometers (more than 1,000 miles) of subtransmission lines, 212 substations, 118,000 transformers, and more than 1 million streetlights. AES Eletropaulo is controlled by U.S.-based multinational company AES Corp., which operates in 21 countries.

Improving service to these customers was a main driver for the AES Eletropaulo Digital Project, said Britaldo Soares, AES Eletropaulo CEO, who spoke during DistribuTECH Brasil’s keynote. Soares said the company also should teach customers to use energy properly and must refine its management systems and infrastructure to do so.

The Eletropaulo Digital Project officially began in January, but AES Eletropaulo has been preparing for several years. Soares said the company’s investments in its distribution systems have been growing 12 percent each year since 2005. The investments include grid automation, control center and telecommunications infrastructure upgrades. In addition, AES Eletropaulo carried out a considerable number of pilots and field tests in recent years to learn more about smart grid.

Sidney Simonaggio, AES Electropaulo vice president of commercial operations, also spoke at DistribuTECH Brasil. He said customers’ demands for high quality, stricter regulators who expect better operating performance, and new, effective technologies that allow utilities to meet service and operating challenges made this the right time for the company to embark on such a project.

“The acceptance of the smart grid concept is a global trend, and therefore its adoption in Brazil is inevitable,” Simonaggio said. “What can be discussed are the scope and the pace of its adoption. With this in mind, AES Eletropaulo has been preparing for smart grid.”

Simonaggio emphasized smart metering is just one part of the smart grid and intelligent networks and smart equipment also are important.

He provided more details about the investments of which Soares spoke. From 2000 until now, AES Eletropaulo has:

“AES Electropaulo began to prepare its distribution network for smart grid in 2010, but with 16.5 million customers, we can’t do it all in three years,” Simonaggio said. “Implementation and deployment must be gradual. We must transition the cost into our rates, and regulators must acknowledge the opportunities (of smart grid).

“With this new system, there is great opportunity to share the network with other infrastructure such as oil pipelines and traffic lights. We can also sell new products to customers.”

Although the AES Eletropaulo Digital Project includes only two small service areas of the company’s entire territory, the project is not a pilot, Simonaggio said.

“It is no longer just pilots,” he said. “We decided to focus on one area and do everything.”

The knowledge gained and technology developed from the project will be applied across the entire service territory.

AES Eletropaulo selected two different areas in which to launch its Digital Project. It chose the city of Barueri to implement a proof-of-concept smart grid. Barueri was selected because its customer base is similar to the rest of the company’s customer base. The city is densely populated and includes residential and commercial and industrial customers with high consumption rates. In addition, it has high technical losses, meaning that reduced losses would result in more revenue almost immediately.

The Barueri portion of the Digital Project is near completion, and many project goals have been realized, Simonaggio said. They include:

1. Fraud detection without sending teams.
2. Remote connect and disconnect. No longer must crews travel for hours to get to a location.
3. Better billing options, including prepayment.
4. Better meter protection and tampering identification.
5. Fault detection and location on low-voltage network without sending teams.
6. Automatic network configuration.
7. Automatic dispatch of teams.

Eliminating the need to send a team to identify fraud, determine fault locations and disconnect or reconnect service allows AES Eletropaulo to save much time and money because travel in Sao Paulo can take hours because of slow-moving traffic, Simonaggio said.

In addition to Barueri, AES Eletropaulo implemented the Digital Project in Vargem Grande and Caucaia do Alto on Sao Paulo’s western outskirts. It selected this area because its challenges are different than most of Eletropaulo’s service territory. The company serves some 32,000 customers in this area with an annual consumption rate of 178,573 MWh and 374 kilometers (232 miles) of primary network. The network has different characteristics than much of AES Eletropaulo’s service territory. It is a rural area with long circuits (100 kilometers or more) (62 miles) that includes 23-kV feeders isolates (three circuits). The performance indicators on this part of the company’s network were “nonstandard.”

No advanced metering was included in the Vargem Grande and Caucaia do Alto Digital Project. The main objective was to create a self-healing grid that could identify and pinpoint fault locations. This solution would solve the problems associated with sending field crews and having them stuck in traffic for hours.

The project should be completed in two years, at which time Electropaulo expects to roll out finite results to the rest of its service territory. Some of the main technology partners are Sinapsis, USP, Energ and FITech. 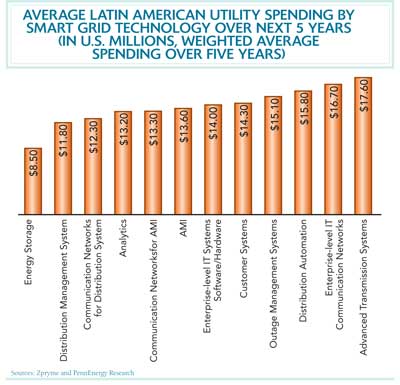 A PennEnergy Research and Zpryme survey of 40 Latin American utilities in July shows the region has yet to pick up significant steam when it comes to large-scale smart grid deployments.

Overall, Latin American utilities are eager to modernize their electrical systems, but their approaches are more conservative than their North American peers.