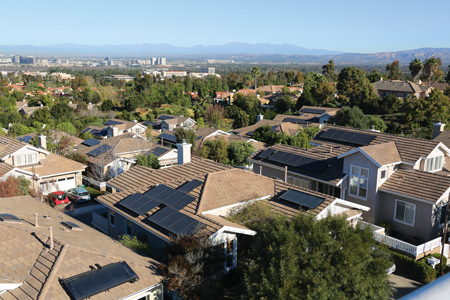 The California electricity grid of the future will look substantially different from the grid of today. By 2050, California wants to have cut its emissions to 80 percent below 1990 levels. By 2020, electric utilities are mandated to obtain one-third of their energy from renewable resources while new residential construction is expected to be zero net energy (ZNE). Four years later, utilities have to install 1,325 megawatts of energy storage; and by 2030, all new commercial construction is expected to be ZNE.

In 2009, anticipating these challenges, Southern California Edison (SCE), in partnership with the U.S. Department of Energy (DOE), embarked on the Irvine Smart Grid Demonstration. ISGD was funded through the American Recovery and Reinvestment Act of 2009 (ARRA). The DOE grant was $39.6 million, which SCE matched with in-kind contributions of $26.9 million and with $12.7 million from project partners such as GE and SunPower.

ISGD looked at the grid from end to end to see how the power network could promote sustainability by incorporating more renewable resources and energy saving devices and by performing system modifications on both the customer and the utility sides of the meter. A major goal of the demonstration was to understand how to meet the needs of a new generation of energy and environmentally conscious consumers. This holistic approach allowed SCE to demonstrate a broad set of grid capabilities while remaining focused on the end users—22 homeowner participants who were themselves experimenting with the tools to control their energy use and costs. 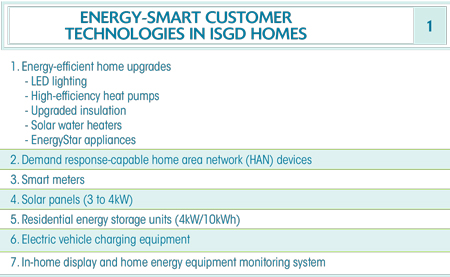 The project team installed ISGD components between March and September of 2013. Field experiments began on July 1, 2013, and continued through June 30, 2015. In the ensuing months, SCE has been analyzing the data and identifying lessons learned. The final technical report will be submitted to DOE in December 2015, but in the meantime, interim results are providing some clear directions for SCE and for the future of grid technology.

The University Hills neighborhood of Irvine that was selected for the project is on the University of California, Irvine campus (UCI). The neighborhood met the project’s technical criteria for circuit characteristics, geographic considerations, home age and style and transformer capacity. Three blocks of homes that were built more than a decade ago were retrofitted with different sets of energy saving devices and rooftop solar panels (see Table 1). A fourth block served as an experiment control group.

ISGD was organized around four domains: Smart Energy Customer Solutions, Next Generation Distribution System, Interoperability and Cybersecurity, and Workforce of the Future. These domains were further divided into eight sub-projects (see Table 2).

This domain comprises customer-facing sub-projects that examined how technical solutions could be applied by real people where they live and work. In the homes, sub-project 1 looked at ZNE and advanced demand response capabilities with various home area network devices. Sub-project 2 examined a solar car shade on the roof of a UCI parking structure that combined 48 kW of solar photovoltaics (PV) with energy storage to supply 20 electric vehicle charging stations in the parking structure below.

All the homes received some form of energy storage. Two blocks of homes received their own 4 kW/10 kWh battery unit, capable of balancing the homes’ solar PV output, shifting energy use from on-peak to off-peak periods and storing enough energy to power critical home loads for several hours. Another block received a community energy storage device (25 kW/50 kWh) that was used for similar purposes. The in-home units were first generation and likely less efficient and cost-effective than the energy storage devices expected to arrive in the market over the next year. The community energy storage system will be tested further in future demonstration projects.

ISGD also performed experiments that examined the impacts of electric vehicles (EVs) on the grid. Homes in three blocks were outfitted with EV charging stations and these homeowners, through a separate, unaffiliated UCI program, were also lent EVs. One experiment used existing smart meter technology to develop a demand response program for EVs. Smart meter radio communication delivered demand response signals to the homes, throttling or stopping EV charging during periods of peak energy use. This measure would enable customers to allow grid operators to remotely adjust the rate and timing of EV charging in exchange for reduced electricity rates. So, for instance, a car that would be charged overnight, could start charging later (or charge at a slower rate) allowing grid operators to pause or slow EV charging to prevent transformer overloads or to use surplus renewable generation. These demand response capabilities were combined with control of the customer’s air conditioner, home energy storage and smart appliances to show how customers could control their energy use to help reduce their costs. 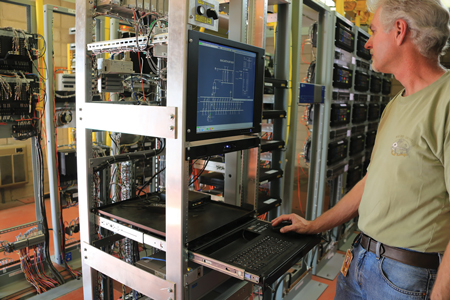 The solar car shade, which includes a 48 kW solar PV array, is connected to its own 100 kW/100 kWh battery located in a cargo container adjacent to the parking structure. The solar energy either directly, or through the battery, provides power to 20 EV charging stations, allowing charging during periods of peak electricity use while minimizing impacts to the grid. During the experiment period these charging stations were free to users, and their popularity grew over time. Although final results have not been tallied, it appears that for much of the experiment period the system produced as much energy as was used for EV charging. By the end, however, the allure of free 24-hour per day charging tipped the system into being a net energy consumer. At the conclusion of the project, the charging stations will be converted to a pay system and may again demonstrate ZNE usage.

Sub-project 5 reconfigured two distribution circuits into a closed loop, rather than the traditional radial configuration. This allows engineers to identify and isolate circuit faults without interrupting power to all customers, while also reducing outage length. 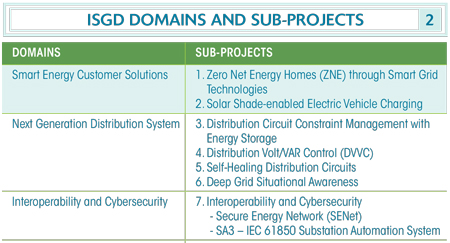 Two sub-projects used a large energy storage battery (2 MW/500 kWh) connected directly to a distribution circuit. In sub-project 3, this battery was able to reduce distribution circuit loading near the substation by discharging energy during peak times. Sub-project 6 used the battery to provide circuit-wide changes in load in order to simulate distributed energy resources (DER) participating in a demand response event. This experiment used phasor measurements and an analysis algorithm to detect the number of megawatts of demand response on the circuit. Such a capability could potentially be useful for supporting market participation of DER.

Interoperability and cybersecurity are foundational elements for the development of smart grid capabilities. As the electric grid evolves, it will include an increasing number of distributed and interconnected grid devices, both utility and customer-owned. Interoperability helps these devices work together seamlessly and efficiently. The grid and our customers also need to be protected from increasing and persistent cybersecurity threats.

For ISGD, the SENet provided a secure communications and data handling system based on centralized cybersecurity services that extended all the way down to the radios operating within the project homes and the energy storage devices located on distribution circuits. This system integrated multiple data sources so grid operators and engineers could better understand what was happening on the grid and respond appropriately. As part of ISGD, data was collected from a number of sources including circuit monitors, residential energy storage, solar PV, thermostats, distribution automation equipment and substation automation systems. To collect this information and make it operational, SENet interfaced with multiple communications protocols including ZigBee, smart meter systems, private mesh networks and cellular data..

Substation Automation 3 was demonstrated at MacArthur substation in Newport Beach, California. The goal was to transition to standards-based communications, automated control and enhanced protection design. The design incorporated IEC 61850-compliant software and hardware from multiple vendors. The IEC 61850 standard provides an internationally recognized method of communications for substation equipment providing protection, monitoring and control. This standard also provides simplified system configuration and integration. New testing methods using simulation and hardware-in-the-loop systems allowed this substation automation system to be implemented in record time with minimal problems. To date, the system has been operating so well that it has been made the standard for SCE’s future substation automation implementations.

Workforce of the Future

The grid of the future will require a workforce skilled at understanding new, information-driven technologies. In the project’s fourth domain, ISGD components were examined against the current infrastructure to identify the workforce skills necessary to properly install, operate and maintain a new generation of grid technologies.

Training best practices suggested by the ISGD workforce development team include: engaging the workers and their supervisors early on in the design process; building awareness among the stakeholders; involving the stakeholders in the technology development/deployments; conducting training sessions that allow participants to touch and feel the technologies; and providing easy access to on-demand training materials for workers.

ISGD has already led to the implementation of new systems, such as distribution volt/VAR control and Substation Automation 3, and identified areas for further research and demonstration projects. Some of these research and demonstration projects, such as volt/VAR control using DER, coordinated operations of several DERs to manage circuit loading and advanced distribution circuit reconfiguration device development and operations are being undertaken with California Electric Program Investment Charge (EPIC) dollars, and others are being funded internally by SCE.

As part of the Distribution Resources Plan filed with the California Public Utilities Commission in July, SCE laid out plans for the Integrated Grid Project. The project will evaluate how technologies like the smart meter and volt/VAR control could help mitigate problems associated with DER implementation. The Integrated Grid Project will demonstrate both the controls to manage and operate DERs and the ability to optimally serve an integrated distribution system safely, reliably and affordably while determining the value of DERs as grid assets.

SCE has been sharing the lessons it has learned through its participation in ISGD with industry stakeholders, including vendors, standards development organizations, academic and industry research organizations, regulators and other utilities. The final technical report will be available on the DOE website, smartgrid.gov, in early 2016. The lessons learned from ISGD will likely influence the direction of new products and guide the development of better standards.