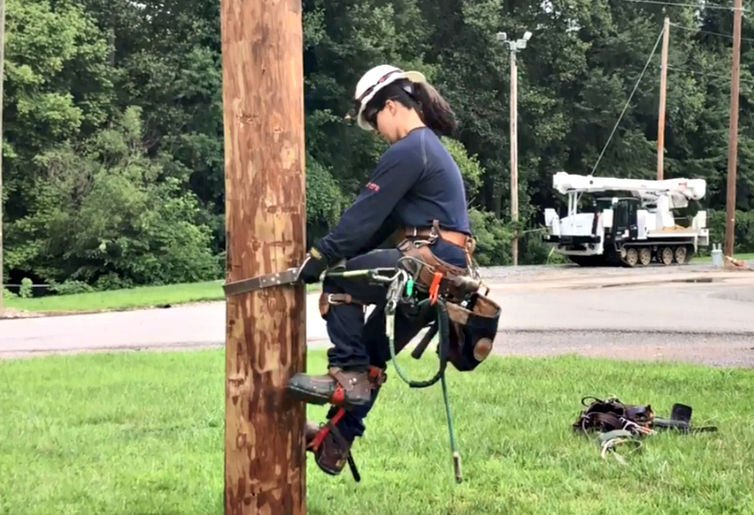 With nearly 100 years of service to West Virginia customers, Mon Power made history when its first-ever female line worker joined the workforce in June.

After graduating from college on a soccer scholarship in 2012, Ashley Morris worked as a registered operating room nurse for five years. Although she loved working in a fast-paced, high-pressure environment, Morris longed for a career where she could be outdoors and help people in a different way.

“I wanted a job where I could come home every day and be happy and proud of the work I do. Being a lineman is it,” said Morris, who was introduced to line work by a former soccer coach who was a line worker for many years.

The Excellence in Character Awards (formerly, Woman of the Year Award) are taking nominations now.

Growing up with two brothers, Morris was not intimidated to enter a male-dominated industry. Before she tried out for a spot in the company’s Power Systems Institute (PSI) line worker training program, Morris completed hundreds of hours of cardio and strength training exercises to get her body in tiptop shape.

“Climbing a pole is challenging in itself,” said Morris. “But climbing while wearing 60 pounds of gear in extreme weather conditions requires a lot of physical and mental strength and practice.”

Morris is able to climb a 45-foot utility pole in under 15 seconds.

Longtime Mon Power line worker Randy Summers said for as physically demanding as the job is, Morris has earned her spot like everyone else through her hard work.

“It’s a hard job, it’s physical labor and not everyone is cut out to climb poles and be up high,” said Summers. “Ashley is proof any man or woman can do this job if they work and train hard.”

“We’re all professionals working hard to do a good job while staying safe and looking out for one another in the field,” he said. “We’ve all been put through the same intense training with a strong emphasis on safety, and I know can trust my linemen or women with my life.”

Morris is one of five female line workers employed by FirstEnergy Corp.’s 10 electric companies in Ohio, Pennsylvania, New Jersey, Maryland and West Virginia. She has developed a close bond with her female counterparts in Pennsylvania and New Jersey, and she looks forward to working with them to recruit more women to the electric utility industry.

The two-year PSI program combines technical coursework at local community colleges with hands-on skills instruction at company facilities. Line and substation students take part in a paid summer internship between their first and second year of the program, and many are offered jobs upon successful completion of the program.

“If this is something you want to do no matter your gender or ethnicity, go for it,” said Morris. “Work hard, train hard and don’t let anyone stand in the way of you and your goals.”