There is dawning realization in the electric power industry of the value of applying formal asset management principles.

Such an approach, as embodied in the British standard PAS-55 and the incipient international standard ISO 55000, enables the institutionalization of asset management best practices and consistent outcomes in this era of aging work force and ever-greater demands on the assets.

In this context, the use of asset health scoring as a condition assessment tool and condition- and criticality-based ranking of the fleet as a template for asset management is gaining currency.

It is vital for utilities to rapidly spot underperforming or potentially failing assets. 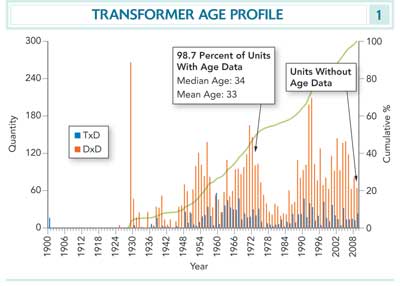 Access to offline test data, online monitoring and synthesis of the resulting monitoring data with operational and asset historical data provides the backbone for action planning and asset intervention.

Managing a Fleet of Transformers

Many utilities own large fleets of power transformers. In many cases, the transformers have been installed over decades.

A tendency exists to assume older transformers are naturally less reliable than newer transformers; paper aging, insulation deterioration and mechanical damage from faults contribute to an increased propensity to fail. A recent study by National Grid U.K. presented at the 2013 International Conference of Doble Clients, however, shows the age of a unit is not necessarily a good indicator of transformer reliability. Much more attention should be given to design, manufacturer and service history. 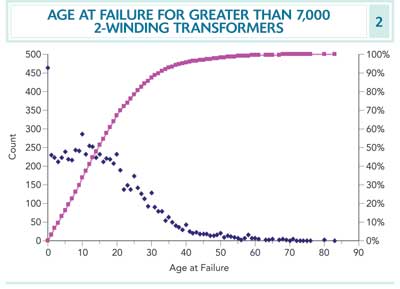 What, then, is an asset manager to do when faced with managing an extensive array of power transformers?

1. Collect data: condition, operation, family/design, industry, etc.
2. Analyze data: Look for anomaly and outliers.
3. Identify anomaly: based on individual asset data, which may combine condition and operation data or aggregate data across several assets or asset types.
4. Diagnose anomalous data: Find possible causes.
5. Identify a prognosis for anomalous data: What is likely to happen and with what consequences in what timescales?
6. Identify risk: allows for prioritization of intervention.
7. Plan for intervention: Replace a failed unit; repair or refurbish a unit that is failing gracefully; plan longer-term investment; one action plan may be to not physically intervene but plan for failure.
8. Continue to re-evaluate the situation: Some decisions might be fuzzy or ill-defined. Continue analysis and review timeliness and appropriateness of intervention.
9. Iterate: further data collection and checking and review of anomaly detection.

The examples here are cases where condition monitoring has allowed for timely intervention in asset management: preventing failures and avoiding loss.

Partial discharge is the general term given to electrical breakdown of part of the overall insulation system.

Energy is produced in various forms and can be detected through, for example, radio frequency interference (RFI).

In Figure 3, there are two traces made across the frequency range from 50 megahertz (MHz) to 1 gigahertz (GHz). 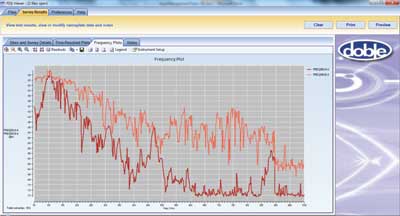 The measurement is made using a Doble PDS 100 that detects RFI, in this case as part of a substation survey.

The higher the energy recorded, the closer the trace is to the source of the partial discharge.

Many places on the substation are chosen and RFI records are made at each point. It is clear from the two traces that one has much more energy-is higher up the screen-and is closer to the source of discharge.

Care must be taken to calibrate the instrument correctly to pinpoint where within the asset that discharge is taking place and how to address it. In this case, the source was associated with a power transformer and the appropriate maintenance was scheduled to address a problem within the unit.

Bushings are devices that allow a current-carrying conductor to pass through a barrier, such as the conductors for the windings of a transformer passing through the transformer tank, which holds the oil. Monitoring the bushing leakage current indicates the status of the bushing insulation. The leakage current can be used to derive a power factor or dissipation, which varies over time. The power factor plotted in Figure 4 shows deterioration in a graceful manner over several weeks, which was detected and allowed for planned replacement of a failing bushing. 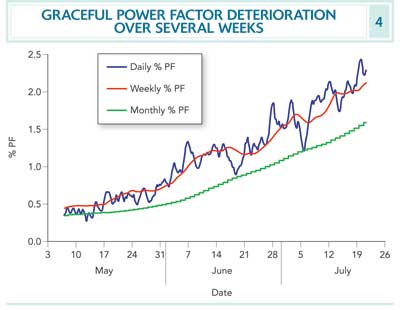 Not all bushings fail in a graceful manner, however; the following data shows the leakage current magnitude for hourly measurements of a relatively new bushing, less than 10 years old. It went from good to bad condition in just a few hours. Condition information was confirmed by offline testing and a subsequent teardown of the bushing. A catastrophic failure likely was avoided. 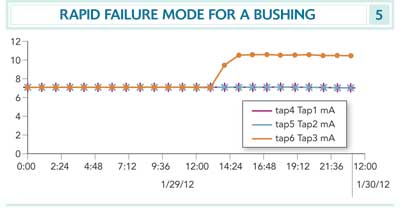 Many years’ of Doble data and cases shows that bushing monitoring requires good planning and timely intervention. Risk analysis of the individual bushings means intervention can be planned and acted upon effectively.

Analyzing data requires limits on values plus understanding what the data means. Ken Wyper, a colleague in substation asset management, writes a useful view from the field in “Condition Monitoring in the Real World.”

“Online devices are intended to collect data, but the modern focus is on “Ëœplug and play’ where you install it and sit back and watch the benefits roll in,” Wyper writes. “Online monitors collect a lot of data and that requires a lot of analysis. Tools to make this task simpler to manage and interpret are vitally important to the success of any online monitoring project. This again, is very closely related to the need to understand how the monitor actually derives its data from the quantities it measures.”

That is, if you look only at the numbers, you might miss something.

Doble has been involved in asset management from the earliest years and brings practitioners together at the annual Asset and Maintenance Management Committee meetings and proves inputs to ISO 55000 developments.

With this experience and involvement, the company has developed an asset risk management system that proactively analyzes data and highlights anomaly in limits and complex analytics tuned to assets and their performance.

In Figure 7, the areas in which utilities should concentrate are identified through the graphical interface (GIS) with performance dashboards of long-term asset watch and recent alert lists generated. 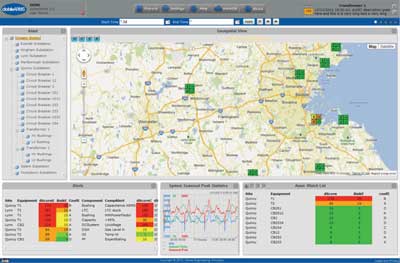 These mean things won’t get forgotten when something new and exciting happens at a previously calm location.

Making best use of available technical expertise is vital in analysis of anomalous data: identifying what is worth a response and what can be accepted operationally without immediate intervention.

Don Angell is vice president of strategy and solutions for Doble Engineering Co. Before joining Doble, he spent more than 30 years with National Grid in the U.S., Commonwealth Edison in Chicago and Idaho Power. He has had management roles responsible for engineering, operation, maintenance, asset management of transmission lines, substations and distribution. He is a senior member of the IEEE.

Tony McGrail is the Doble Engineering solutions manager for On-Line diagnostics, providing condition, criticality and risk analysis for utilities. Previously, he spent more than 10 years with National Grid in the U.K. and U.S. He is a Fellow of the IET, a member of the IEEE, ASTM, CIGRE and the IAM, is on the Doble Client Committee on Asset and Maintenance Management and a contributor to SFRA and other standards. He has a degree in physics, supplemented by a master’s and doctorate in electrical engineering and an MBA. He is an adjunct professor at Worcester Polytechnic Institute.

Kenneth R. Elkinson, P.E., received his Bachelor of Science in Electrical Engineering from the University of Massachusetts at Lowell. He has worked at Doble Engineering as a field engineer, client service engineer and now apparatus analytics engineer. Previously, he worked with National Grid in the U.S. as a substation engineer. He is a member of the IEEE, CIGRE and the NSPE.