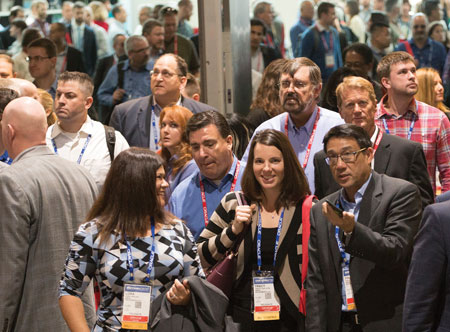 Sunshine and fog from the bay. High tech and great conversation along the way. DistribuTECH 2017 had it all covered in San Diego.

The 27th version of the nation’s biggest annual transmission, distribution and smart grid conference featured people and topics from all over the world. The latest DistribuTECH broke records for attendance, Twitter trending and participation in brand new tracks on crucial industry topics.

“First, they get the big picture,” Bob Donaldson, manager of demand response, Carolinas, for Duke Energy, said about the event planners. He was also conference chairman for the first-time the highly popular DER, DR and Other Non-Wires Alternatives track. “They gather news and information from around the world, not just one state or country.”

The numbers were historically significant during the Jan. 31-Feb. 2 event. DistribuTECH played host to 13,560 attendees from 77 nations, more than 2,000 above last year’s event in Orlando and an all-time record. Among those were more than 3,100 utility employees, representing 326 utilities from investor-owned to cooperatives, municipalities and public power. They had their choice of 83 sessions from 14 topic tracks. Online, #dtech2017 was all the buzz, with 3,400 users sending that hashtag out on 11,900 tweets over the three-day event. On Tuesday, Jan. 31, DTECH 2017 was one of the biggest trending topics on Twitter, somewhere in the same galaxy as Donald Trump and Miss Universe.

“We are thrilled with a 20-percent jump in attendance this year,” said Teresa Hansen, editor in chief of POWERGRID International and DistribuTECH conference chairwoman. “The opening keynote was packed and so were the conference sessions.”

Indeed, but enough with the back-slapping and on to the content from DistribuTECH 2017. It all kicked off, appropriately enough, on a clear San Diego morning with ELO’s “Mr. Blue Sky” ringing out in the convention center ballroom. Images of the Gaslamp Quarter and other landmarks shone forth, segueing to the mission of bringing cleaner, efficient and abundant electric power to customers.

Change was the theme of the keynote. Scott Drury, newly minted president of host utility San Diego Gas & Electric, touted the enormous opportunities available to utilities in meeting smart grid challenges in both the home and transportation sectors.

“The transportation sector is still responsible for most air pollution,” Drury noted. “Half of the country’s electric vehicles are in California” and his own EV was parked in the convention center garage downstairs.

Audrey Zibelman, formerly chairwoman of the New York Public Service Commission and now incoming CEO for the Australian Energy Market Operator, talked about how hardening the grid-a key outage management priority for the Empire State devastated by Hurricane Sandy not so many years ago-was paramount there and everywhere. Every utility, no matter where, must adapt to a changing world which requires efficiency and responsiveness made possible only by smart grid innovations such as sensors and switches and advanced meters.

“When we talk about the future grid, we’re talking about moving from hours to milliseconds-where we have a dynamic read on demand and a dynamic operating capability to meet that demand,” she told the ballroom crowd of thousands. “It’s not just about the engineering and tech; it’s about the business model.”

Zibelman added that an event on the scale of DistribuTECH was so important in these hyperspeed-changing times. She even called it the “CES of the electricity industry,” a reference to the enormous Consumer Electronics Show in Las Vegas every year.

The keynote finale belonged to Geoff Colvin, author, cultural commentator on all things technical and editor at large with Fortune magazine. He pointed out the fast rise of Uber, collapse of Kodak and the stunning election of a certain New York billionaire businessman to the highest office in the nation. Nobody saw them coming.

“Nobody got it right,” Colvin quipped. “Our models just don’t work anymore. Our models for predicting what’s going to happen are just not good. They’re not working the way they used to. And that’s what makes this market so uncertain.”

DistribuTECH tried to take some of that uncertainty out by offering the latest and best technical know-how and visionary thinking out there. Popular tracks included Data Analytics, Defending the Grid, the aforementioned DER, DR and Non-wires Alternatives and another new one on the Internet of Things-Smart Cities transformation.

Some 350 attendees filled the room for a session on “Can DER Defer Traditional Distribution Capital Investments” while nearly as many flocked to a mega-session on “The Next Generation Distribution Grid.” The DER, DR and Non-wires Alternatives track had several sessions with attendance topping more than 200.

“I think it struck a chord because globally and nationally, just about every country, state and electric utility large and small is impacted in some way by the emerging DER industry,” track chairman Donaldson said. “Whether it’s environmental regulations, renewable portfolio standards or increased customer desire for clean, sustainable energy, DER integration is now a reality that affects everyone.”

A mysterious fog rolled in from the Pacific that Tuesday evening and lingered through Wednesday morning, stopping airline traffic for a time. It hardly slowed the DistribuTECH roll, though, as close to 2,000 attended Wednesday morning’s sessions, including more than 150 at a Data Analytics session on “Customer Engagement and Innovation.”

The rooms stayed full even through the Thursday morning final run. Nearly 120 took in “The Thin Grid Line” and its take on utility cybersecurity, while 175 absorbed expert opinions on “Energy Storage: Investing in a Dynamic Grid” as the swan song of the DER, DR and Non-wires Alternatives track. In addition, IoT-Smart Cities was another brand-new track that attracted nearly 500 attendees over its five sessions.

Data Analytics was not a new track, but it held its own with each session averaging well over 100 attendees each. Track chairwoman Sharelynn Moore, who is vice president of marketing and public affairs for Itron, said the industry is in the midst of unprecedented change that affects everyone on both sides of the meter, leading to robust topics for the future.

“We used to think that customers didn’t care about the utility unless they got a high bill,” Moore noted. “That dynamic is changing with prosumers who have the opportunity to not only save money but make money. Analytics are a critical backbone to making this possible.”

When attendees weren’t getting buzzed by industry inside baseball, they were having fun at one of several parties. The band After Party rocked the ballroom for one event, and the Lights! Camera! Networking! fete was adorned by movie star lookalikes, including a Johnny Depp so close you would think the Black Pearl was nearby in the harbor.

Even more varied than the sessions was the colorful, stunningly diverse exhibition hall. More than 500 companies maintained booths for demonstrations, meetings or simply curious conversations. You name them-Oracle, ABB, Leidos, SUS and DistribuTECH’s diamond sponsor Itron, among many others-they were there to show their wares. Deals were done or revealed during DistribuTECH, including Schneider Electric’s partnership with Duke Energy Renewables to provide a kind of microgrid-as-a-service deal for Montgomery County in Maryland.

During a Schneider executive briefing breakfast that coincided with DistribuTECH, Mark Feasel, vice president of Schneider’s electric utility and smart grid segment, talked about a world that is becoming increasingly electric and yet also moving away from traditional demand models and generation sources such as coal. Electricity is a basic human right, he noted. It is wanted by billions who don’t have it regularly and wasted by millions who do.

“We’ve got to get three times better at using energy,” Feasel said.

Itron’s Moore echoed these challenges facing utilities. The old business model is out, and new technologies are more accessible every day.

“As the cost of processors and sensors decreases, innovation increases,” she said. “We saw that at DistribuTECH this year. Companies are bringing new and more innovative ways to solve utility challenges, and utilities are eager to learn more.”

DistribuTECH 2017 was all about figuring out how to get more from less and incorporate billions of gadgets all along the grid. Next year’s conference and exhibition-scheduled for Jan. 23-25, 2018, at the Henry B. Gonzalez Convention Center in San Antonio-will offer more of that.

The floor plan and registration already are open for next year. Go to distributech.com for more information.