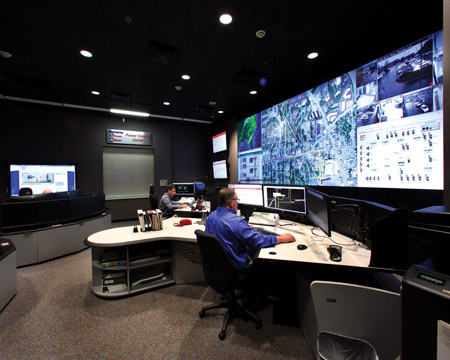 You don’t have to be a big electric utility to provide great service.

At least that’s the case at Marietta Power, a municipal utility in Georgia that for three consecutive multiyear series has won the American Public Power Association’s RP3 award for Reliable Public Power Provider.

The award measures four important criteria for the well-run electric utility, which include: System Improvement, Reliability, Safety and Workforce Development. The program awards three levels of attainment. A score between 80 and 90 is Gold while 90-98 is Platinum. The highest award is Diamond, 99-100.

“It’s all about power restoration,” said Jim Culpepper, supervisor of the utility’s power control center. “The faster we can restore power, the better it is for our customers and for us.”

Culpepper said Marietta is nationally known for its average power restoration time, and that low number has been a big part of its ability to win the RP3 award so consistently.

Keeping the Lights On

The utility, owned by the city of Marietta, has worked hard to ensure the technology it uses is the best available, Culpepper said.

“With 46,000 customers, we’re not nearly as large as a Georgia Power, but we are at least as state-of-the-art,” he said.

For example, Marietta Power is looking to install fault detection, isolation, restoration (FDIR) so when an outage occurs, the system automatically will reroute power to minimize downtime for customers.

“Every feed line is looped so that if something happens to one line, we can feed you from another direction,” Culpepper said.

Roughly 76 percent of Marietta Power customers are residential, and 14 percent are commercial with a 10 percent mix of business, manufacturing, schools and government.

Major power outages are restored quickly with the city’s ACS Prism supervisory control and data acquisition (SCADA) system that gives technicians in the control center the ability to operate the city’s electric and water systems with a mouse click.

“It’s absolutely crucial that technicians can quickly and clearly see exactly what’s going on throughout the city, especially if there’s an emergency,” Werner said.

Culpepper is able to provide examples.

“We had a major fire in an industrial plant back in May,” he said. “The fire department asked us to de-energize the lines feeding the plant. We were able to open a breaker to do that from the control room, while at the same time rerouting the feeds to minimize the number of customers affected by the outage.”

The water system includes two 500,000-gallon above-ground water tanks plus three pumping stations and a wet well station also operated from the same control room. The technicians who monitor the power and water operate the SCADA system and dispatch and track the crews who repair damaged lines.

“I don’t believe in specialization within the control room,” Culpepper said. “Our people are fully cross-trained and have access to all operations. We never have to wait to act because someone’s out to lunch or someone can’t log into a critical system.”

The control room also monitors and operates the city’s internal fiber-optic computer network and the Board of Lights and Water internal security and surveillance systems. Technicians monitor local and national weather, as well, and the utility subscribes to Schneider Electric Doppler radar services to better anticipate storms that might affect its service area.

“From lightning strikes to ice storms or hurricanes in the Gulf of Mexico, this radar system allows us to keep an eye on anything that is a potential threat to our system,” Culpepper said.

“It’s true that we can’t do anything to affect these storms,” he said, “but we can be ready for them and the damage they are likely to do.”

The city has 260 miles of overhead power lines, but Marietta Power has been investing in underground distribution, as well, with 331 additional miles now below grade where they cannot be damaged by bad weather or fallen trees.

To improve system operations further, Culpepper and his staff began planning a new control room about two years ago.

“We did some window shopping at General Electric and at a number of other utilities,” he said. “Then we focused on those systems we were most impressed with.”

They began working with Mark Dunlap, a utility market manager for Activu Corp. The technology integrator specializes in visualization solutions for control centers.

The display wall provides a single, 7-foot-high by 18-foot-wide image with 5,600 x 2,100 resolution, onto which technicians can send any number of data windows in a wide range of layouts.

In addition, Activu installed four Mitsubishi 55-inch flat panels (two on each side of the wall) to show less critical information.

Up to five technicians can man the new control room, each with his or her own computer workstation on a motorized sit or stand desk.

About half of the display wall normally is devoted to the city’s outage management system.

“It looks like a Google map showing the entire city,” Culpepper said. “All of the electrical lines show up in different colors, and we can see the service drops from the poles and the transformers going to the homes. We can pull up anything we need-the transformer numbers, their locations, the locations of our trucks, the names of our customers and data about them.”

The map is extremely detailed. Operators can zoom out to see the entire city or zoom in on one house.

“On one layer of the map, we have symbols such as a red cross, so that we can see that one of our residents, for example, has health issues,” Culpepper said. “If there’s an outage affecting that house, we know we have to give it priority or send someone out to make sure they get their oxygen.”

The four flat-panel displays allow technicians to monitor system status, news and weather and a feed from MEAG Power, where Marietta buys its electricity.

A SMART interactive touch display makes it easy to fill out and send work orders.

Dunlap said one purpose of the Activu software is to create a common operational picture that enables people in the power control center to monitor data points that are important to them at that time. 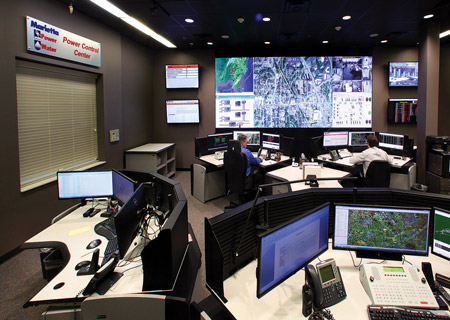 “For example, if the weather is not important, it’s minimized on the top left, but if there’s a storm or a lightning strike, it might take up 50 percent of the display wall,” Dunlap said.

The software also expands situational awareness by making it easy to send appropriate parts of the overall image to those who need to see them.

“They have a 5-by-10 window overlooking the control room, and also a SMART touch display where they can bring up any view they might need,” Culpepper said.

He can do the same from his office.

The new Mitsubishi display wall is much better than the one it replaced, Culpepper said.

The city had purchased the previous display wall from another very large producer of projection cubes.

“We bought what was state-of-the-art at the time,” he said, “but the difference is like comparing a new flat panel and your old TV; you can see now how dark and grainy it used to be.”

In addition, he said, the old projection cubes used lamps as their light source; the new cubes have LED light engines that never need to be replaced.

“We had nine screens, and each had two bulbs which cost $600 apiece,” Culpepper said. “They had to be replaced every year. You can see how expensive that was.”

The manufacturer of the original display wall had stopped supporting the projection cubes and provided no upgrade path.

“With Mitsubishi, you can always purchase a new optical engine and keep the rest of the wall intact,” Werner said.

Culpepper said he knows that everything quits at some point.

“But the great thing about our new setup is that if something goes wrong, it’s an easy fix,” he said. “If a Mitsubishi cube goes down, we can open the back, pull out the light engine and slide in a new one, and we’re back in business.”

The color, brightness and focus all adjust automatically.

“With the old wall, that was supposed to be what would happen, but in reality we could be down for a long time.”

Werner said Mitsubishi cubes have the longest lifetime in the industry: up to 100,000 hours, or more than 11 years running 24/7.

“That’s about 25 percent longer than any other display wall available, and without any required maintenance,” Werner said.

Culpepper said he was impressed with the quick installation.

“Activu and their guys had a very short window to put it in and get it right,” Culpepper said. “I was very impressed with their work.”

Today, the display wall works flawlessly. That’s crucial, Culpepper said, because the power control center is the heartbeat for electricity throughout the city.

Don Kreski is a freelance writer who specializes in stories and white papers for the audio, video and computer industries. Reach him at www.kreski.com/contact.html.