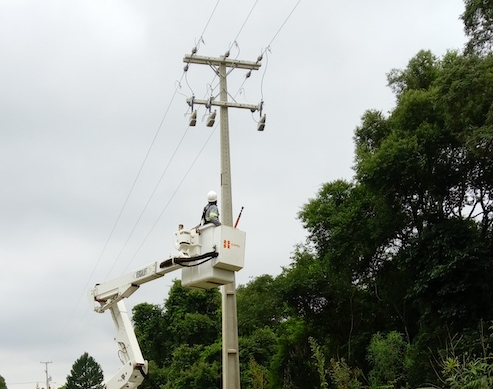 COPEL, located in the state of Paranàƒ¡, is the fourth largest utility in Brazil. Its distribution system consists of 195,459 kilometers (121,452 miles) of lines serving 11 million customers across 395 cities and 1,113 districts, villages, and settlements. The network includes 3.5 million homes, 82,000 industrial plants, 382,000 commercial establishments, and 360,000 rural properties.

When Brazil renewed its utility concessions contracts, the country’s national regulatory agency, ANEEL, imposed stringent regulatory requirements on the utilities. The agency enacted System Average Interruption Duration Index (SAIDI) and System Average Interruption Frequency Index (SAIFI) performance thresholds to measure the utilities’ ability to meet the concessions contracts. These index thresholds posed major challenges for many Brazilian utilities because they had to meet them to avoid financial consequences and potential loss of their contracts.

As a result, COPEL was required to decrease its SAIDI performance relatively quickly, mainly in its rural-service areas, which had the poorest reliability. Reducing SAIDI motivated COPEL to search for new solutions that would enable it to meet ANEEL’s requirements while in turn reducing operating costs and providing a return on investment.

Targeting rural laterals with the poorest reliability, COPEL conducted pilot projects in the towns of Maringàƒ¡ and Cascavel. The utility sought to compare potential single-phase reclosers from a few manufacturers and examine their field performance to determine which strategy would best address ANEEL’s requirements.

Having used S&C’s switchgear and smart grid solutions for years, COPEL was interested in S&C’s TripSaver II Cutout-Mounted Recloser, which provides an advanced lateral-protection strategy that detects whether faults are temporary and restores power automatically when they are. COPEL was also particularly impressed with the TripSaver II recloser’s visible drop-open feature, along with S&C’s technical support and reduced installation time.

During testing, two sets of TripSaver II reclosers deployed on three-phase systems avoided 62 truck rolls in Maringàƒ¡ and 83 truck rolls in Cascavel. Upon careful review of the single-phase reclosers, COPEL chose the TripSaver II Cutout-Mounted Recloser and a second recloser from another manufacturer for a larger-scale, second pilot. The purpose of the second phase, with approximately 1,000 units from both manufacturers, was to evaluate longer term field performance

After analyzing the results collected from the largescale second-phase pilot, COPEL determined TripSaver II reclosers were the best solution for its system and ultimately selected them for a systemwide deployment of 3,300 units.

Before shipment, S&C created color codes to identify each of the six TCC curves on every TripSaver II recloser. The color-coding simplified the installation process, increased safety by minimizing the risk of installation error, and ultimately accelerated the deployment process. S&C engineers also provided field services, training, and data collection to help with the installation. S&C’s field training was very well received by the utility crew, as safety is an important consideration for COPEL.

When COPEL began reviewing the TripSaver II recloser’s capabilities, the data revealed a significant performance improvement. During the initial deployment of 1,750 units over the course of 23 months, COPEL realized an operating-cost reduction equivalent to 20% of its investment value. After installing another 1,550 units, COPEL had 3,300 single-phase reclosers deployed at 1,419 installation locations. The devices led to a 68.1% reduction in SAIDI, reducing the average outage duration by 45 minutes and enabling COPEL to meet the stringent performance requirements ANEEL had set. The deployment also enabled COPEL to avoid long truck rolls to rural service areas, freeing its utility crews to be available for other, higher value-added services. S&C’s field training was very well-received by the utility crew, as safety is an important consideration for COPEL.

COPEL was so satisfied with the installation results the utility has since purchased 17,400 additional TripSaver II reclosers. COPEL learned that the user friendly single-phase reclosers are an essential tool for the improvement of the performance reliability on its distribution networks and its three-phase 13.8-kV and 25-kV laterals and single-phase 34.5-kV laterals, and a means to achieve the goals ANEEL had set.