As if utility transmission division engineers and managers don’t have enough problems, another problem looms when they contemplate new power line construction. New systems might interfere with the lawful operation of broadcast AM radio stations, thereby opening power companies to claims for damages.

Terms of a broadcaster’s Federal Communications Commission (FCC)-issued license require the broadcaster to maintain a specified radio signal level over a defined geographical coverage area. If the broadcaster fails to maintain the required service level, it can be subject to FCC fines and, in extreme cases, revocation of its license.

Metal utility transmission towers, especially those operating within several miles of an AM broadcast station transmitter, can become unwanted auxiliary transmitting antennas for the radio station. Under some circumstances, they can capture some of the power in the electromagnetic field generated by the radio station’s own towers and re-transmit that power back into the air. Depending on a mix of factors, the secondary re-transmitted power can interfere with the station’s existing primary power distribution and modify or decrease the station’s authorized coverage area, as well as create interference for other stations.

Such interference presents two problems for broadcasters: They become subject to FCC fines and, with their coverage areas shrinking, they fail to reach some potential listeners. Thus, the stations’ revenues are damaged.

The physics of the interaction between towers and an electromagnetic radio field can be described in phase relationships in primary and secondary electromagnetic fields, but a complete explanation is beyond this article’s scope. These problems generally do not exist with FM radio and television broadcasters, which operate at higher frequencies and shorter wavelengths. Transmission towers are not efficient re-radiators of these shorter wavelengths.

Remediation for this problem involves identifying potentially disruptive transmission towers, performing a radio engineering analysis of each tower, and then designing, producing and installing specific electrical components on each tower to detune it so it no longer acts as a secondary antenna in the presence of electromagnetic radio fields.

The engineered response of Lawrence Behr Associates (LBA) shows how power line interference to AM broadcast stations can be mitigated by rendering illusory the reradiation of a transmission tower.

In spring 2008 Empire’s international engineering consultant, CH2M Hill, retained LBA to define the potential radio frequency (RF) reradiation impact of the 8-mile-long, 345-kV transmission line running from the power plant through the East Greenbush, N.Y., area. The job included identifying and quantifying potential RF impacts on FCC-licensed antenna patterns in the proximity of the power line towers and mitigating, or detuning, any towers that were sources of interference.

Engineers began with an initial screening to identify licensed broadcast facilities and problematic power line structures. The screening employed standard software and practices and relied on the FCC database for AM, FM and TV. The Empire project manager also supplied pertinent data and information such as planned transmission tower site designations, tower heights and locations.

The FCC database identified one licensed radio station within the study area: WGDJ-AM. Thirty-three transmission line structures were identified as possible points of negative impact on the AM station’s broadcast pattern. WGDJ transmits from seven broadcast towers. The currents and voltages of each tower are controlled carefully, with different parameters day and night to result in precise antenna radiation patterns licensed by the FCC. This complex configuration is typical of many U.S.-licensed AM stations.

Detuning complexity is driven by radio station patterns, the number of transmission line towers, the height and material of construction of each tower, its cross-arm dimensions, and the configuration of its lightning shield wires. Infinite combinations of factors exist. The zone of impact can extend as much as two or three miles from the power line.

There also are degrees of detuning, which can depend on meeting FCC tolerances and safety factors for local climactic effects. While mitigation can diminish the impact of a structure in the vicinity of a broadcast antenna, the problem never vanishes; therefore, the scope of each detuning project can vary. The goal in each case is to reduce to acceptable FCC levels the flow of current that AM broadcast signals set in motion along a tower’s face. If the flow can be suppressed sufficiently, the amount of RF reradiation is reduced to where interference effectively disappears and a structure no longer causes an AM station to violate FCC rules. 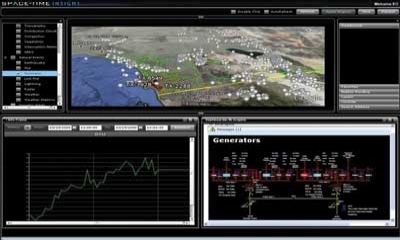 After on-site evaluation near East Greenbush and method of moments computational analyses at the office in Greenville, N.C., LBA determined that eight of the 33 Empire towers would impact the WGDJ-AM licensed broadcast pattern. The study also determined the physical and electrical configuration of detuning elements needed to protect the AM station. Urgency became a factor because the New York Public Utilities Commission had mandated that the new line could not be energized until detuning was complete.

Actual detuning of the eight offending structures was accomplished only after extensive coordination with Empire engineers. Coordination is critical because mitigation hardware includes ancillary cables and rigging added to the detuned transmission towers; the equipment’s safe utilization always is an essential consideration. Furthermore, special RF isolation needed for fiber optic-carrying lightning shield wires required the power company design team to come up with alternate designs. Finally, construction of the transmission line was on a tight schedule, so it was important to coordinate detuning with the constructor’s schedule.

Standard hardware is not manufactured to accomplish power line detuning. Custom hardware is designed and fabricated by LBA’s sister company, LBA Technology. The New York system’s electronic components were attached to the base of each tower in a locked cabinet situated some 8 feet above ground to avoid tampering. LBA engineers followed up with post-installation RF measuring and testing to ensure the effectiveness of each detuning system. Full as-builts and test documentation were furnished to the client and the Power Utilities Commission prior to the line’s being successfully energized.

Overall, the East Greenbush experience proved successful for all. Empire completed a transmission line to serve a customer some distance from Rensselaer and returned to productive use an environmentally despoiled site where the plant is located. AM broadcasting station WGDJ-AM continued to beam its popular talk show programming to listeners without technical interference and in full compliance with its FCC license.

What might have become a legal confrontation or an expensive re-routing of power line infrastructure instead was detuned at much more modest cost into a mutually agreeable, coexisting arrangement.

The experience holds lessons larger than upstate New York. Some 160,000 miles of high-voltage aerial power lines strategically snake across the country, according to the U.S. Department of Energy. Those numbers likely will increase in the next decade—ever encroaching on broadcast patterns of the nation’s 4,800 AM transmitting stations.

The current administration in Washington, D.C., supports alternative energy projects and many new power lines, especially in the West, to distribute the power. The administration also prefers expansion of the power grid from existing plants rather than construction of new generating plants, so power lines could proliferate in every region of the U.S.

Numerous transmission projects already are pending. In the past, lines often were situated in rural areas, remote from AM stations, but new aerial lines often will be in urban areas, much closer to AM stations. Some of them inevitably will cross paths with broadcast patterns from existing radio stations. Knowing where the power and broadcast transmissions will clash is of fundamental importance to power companies and broadcasters. With every extra mile of power line construction costing upwards of $1 million—a conservative estimate—the most direct route is the best route.

Yet something has to give when a chosen corridor for a power line has the potential to interfere with an FCC-licensed broadcast. The obvious solution is to involve detuning consultant RF engineers at the beginning of a power line project—in the planning stage that includes acquiring right-of-way—so the towers can be erected with full confidence and effectiveness and without regulatory delays and costs.

Lawrence Behr is the founder of Lawrence Behr Associates Inc. and the LBA Group. His 35 years of experience span broadcast, military and commercial telecommunications technology. He has served as an expert witness before the Federal Communications Commission, courts and zoning authorities in communications regulatory matters. Behr is a director of the National Association of Radio and Telecommunications Engineers, frequent lecturer and author. He holds patents on several inventions in antenna technology. Reach him at lbwire less@lbagroup.com.