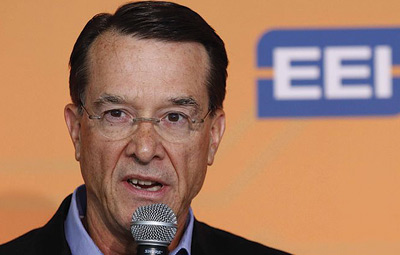 “Ted is a visionary leader for our industry, and it is a privilege to present this award to him,” said EEI President Tom Kuhn. “Ted is always ready and willing to serve the broader industry, and he has been unwavering in his efforts to help focus the EEI membership in critical areas. His steady and determined leadership style truly has helped guide our industry as it undergoes a major transformation.”

The award, established to recognize outstanding individual achievement, was presented during EEI’s winter CEO and board of directors meeting. Craver is the eighth industry CEO to receive the award.

Edison International is a holding company for several utilities, including Southern California Edison and Edison Transmission. The Edison Electric Institute is an association representing all U.S. investor-owned utilities.

Craver was elected president of Edison International in April 2008, and chairman and CEO in August 2008. He also served as chairman, president and CEO of Edison Mission Group from 2005 to 2008. Additionally, he served as executive vice president of Edison International, and as chief financial officer and treasurer from 2000 through 2004. Craver served as EEI chairman from June 2014 to June 2015, and is currently a member of EEI’s leadership serving on the executive committee.

“I have seen firsthand the tremendous leadership role that Ted plays, not just in California, but also nationally. He is a major force in driving our industry to the future with a keen eye on the need to provide reliable and affordable energy every day to all of our customers,” said PG&E Corp. Chairman, CEO and President Tony Earley, a previous EEI Distinguished Leadership Award winner. “On a personal note, Ted is a great friend who helped me transition into California and serves as a role model of integrity and dedication. He is absolutely deserving of this distinction.”

Electric Light & Power magazine last year honored Craver as its Large Utility CEO of the Year. In last year’s ELP article about the CEO of the Year Award, Craver was asked about his leadership approach and interacting with employees.

“Truth be told, it is the contact with our employees that consistently rescues my mood. I’ve lost count of the number of times I have gone into an employee roundtable, on a facility tour or simply gone to the cafeteria or walked the halls where I come away feeling re-energized and recommitted,” Craver replied. “I think it is because it makes me get outside of myself and whatever I’m thinking about and gets me into thinking about what is important to them. As human beings, perhaps especially as CEOs, we can become too self-absorbed.”

Before joining Edison in 1996, Craver served as executive vice president and corporate treasurer of First Interstate Bancorp and held positions of increasing responsibility in capital markets, sales and trading, and corporate development throughout his 23 years in the banking industry.

He serves on several boards, including Health Net Inc., The Nature Conservancy, Autry National Center, the Smithsonian National Museum of American History, and is past-chairman of the Electric Power Research Institute and of the Edison Electric Institute. He is a member of the business roundtable and the Economic Advisory Council of the Federal Reserve Bank’s Twelfth District.

Craver earned an MBA and a bachelor’s degree in economics and international relations from the University of Southern California.