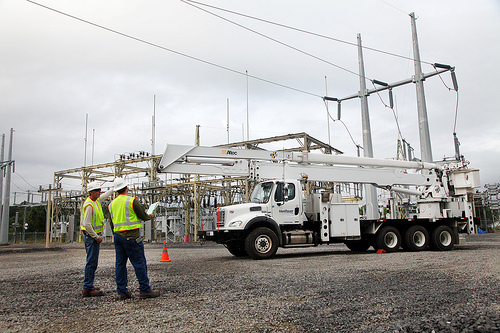 FirstEnergy Corp. invested more than $131 million in 2015 in its Pennsylvania Power (Penn Power) service area on infrastructure projects and other work, including installing substation equipment and rebuilding transmission lines, to help enhance the reliability of its system.

“The work Penn Power completed in 2015, and in previous years, has helped us make progress in reducing the number and duration of outages our customers might experience,” said Randall A. Frame, regional president of Penn Power. “The projects are designed to help enhance day-to-day service reliability for our customers along with maintaining our system’s capability to handle future load growth.”

Some of the key projects in Penn Power’s western Pennsylvania service area in 2015 included:

·      Installing two massive transformers that convert power from 365 kV to 138-kV as part of a substation expansion project near New Castle. The cost of transformers was more than $11.9 million.

·      Installing new equipment in multiple substations across the service area at a cost of $4 million to allow remote operation of circuit breakers. This equipment can reduce the amount of time it takes to restore power after an outage, allowing dispatch office operators to remotely restore or reroute power in less time than it takes to dispatch a crew to the scene of an outage.

·      Inspecting and rebuilding 12 miles of 69-kV transmission lines in the Mercer and Cranberry areas to help enhance the reliability of the transmission system in the area.

·      Adding new poles, wire, cross arms, fuses and animal guards, as needed, on 15 miles of distribution circuits in Mercer, New Castle and Cranberry, at a cost of $4.8 million.

·      About $79 million of the total was spent on transmission-related projects owned by American Transmission Systems, Incorporated, a FirstEnergy transmission company.

Planning is continuing for additional projects that are expected to be completed in 2016, including new substations, transmission lines and circuit upgrades.

Penn Power also began using two new apps in 2015 to more efficiently assess damage to the electrical system and dispatch crews to make repairs in the wake of major storm events. Employees in the field can use this new mobile device technology to automatically enter damage information into the company’s outage management system which helps restore the most customers to service in the shortest amount of time.