Major storms and hurricanes continue to cause property damage and long, widespread power outages in many parts of the country. Although most electric utility reliability programs are aimed at reducing the effects of typical weather and storm events, a new set of hardening programs might need to be implemented to prepare for these major storms.

According to analysis by the Lawrence Berkeley National Laboratory, the number of electrical outage incidents steadily increased between 1992 and 2011 (see figure). Since the release of the study, “Extreme Grid Disruptions and Extreme Weather,” major storm events have caused widespread property damage and electrical outages. The reasons for the rise in severe storms remain debatable, but some 78 percent of all power outages are weather-related (i.e., caused by winter storms, thunderstorms, tornados, lightning, windstorms and hurricanes). A Department of Energy (DOE) estimate places the cost of these weather-related outages to the U.S. economy between $35 billion and $55 billion annually.

The nation’s growing reliance on electricity for powering our smart phones, tablets and Internet access is driving customers to demand more reliable, uninterrupted power. As a result, utilities are investing in grid reliability activities such as infrastructure maintenance and distribution smart grid technologies that help provide faster power restoration. These measures improved overall reliability, but they were not designed to mitigate the damages and long-duration outages caused by major storms such as the 2014 ice storm in Canada and the Midwest or Superstorm Sandy.

How Can Utilities Harden the Grid in Anticipation of Major Storms?

When it comes to grid hardening, utilities can take measures that go beyond current industry standards and best practices. Distribution automation equipment is designed to isolate circuit faults, reduce the number of customers affected by an outage, and help utilities restore electric service significantly faster.

EPB Chattanooga cut customer outage minutes by half during a July 2013 windstorm using automated switches connected by a fiber-optic network; however, distribution automation systems have limited functionality in hurricane-type conditions where a substation might flood, multiple distribution circuits or tie-circuits might be locked out, or transmission towers topple because of excessive winds.

A proper vegetation management program is critical to maintaining a reliable electric grid. To prevent tree-related damage to the grid, utilities must push for enhancement clearances, remove “danger,” or dead, trees and plant new trees that are more power line-friendly. Unfortunately, even the best vegetation programs do not eliminate power outages during major storms. Hurricane-force winds can cause healthy trees to fall across power lines. As a result, selected undergrounding should be considered for critical loads. 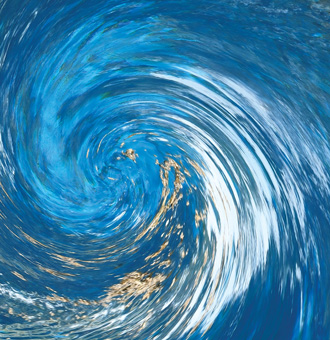 Although undergrounding is a proven method for making electricity grids more storm-resilient, the costs often are not readily justified. Burying overhead wires costs utilities between $500,000 and $2 million per mile, according to the DOE. One approach to storm hardening is to selectively underground the equipment that serves critical, high-priority facilities such as town centers and emergency centers. Coupling undergrounding with other major excavation projects–roadwork, fiber-optic cable installation or other construction projects–and using advanced technologies such as cable conduits can reduce the costs and disruptive impacts of undergrounding.

The flooding of substations and distribution switchgear along the coastal Northeast during a recent storm caused extensive, long-term outages. Even where underground cables were used, above-ground padmounts and other switching devices failed because of flooding. Repair or replacement of such major pieces of equipment is time-consuming and costly. Utilities should consider installing fully submersible control panels and switchgears in flood-prone areas. New York’s Consolidated Edison is investing nearly a quarter of a billion dollars in hardening its low-lying substations that were flooded by Hurricane Sandy. The utility is sealing underground cable conduits, replacing copper wire with fiber optic in its control wiring and installing flexible connectors that can lift its relay panels 10 to 12 feet above the ground in the event of a major storm. In addition, many utilities along the Gulf Coast have elevated their substations as much as 25 feet based on predictions for Category 3 storms, according to the DOE. Other ongoing hardening activities include the relocation of critical facilities away from flood-prone areas, strengthening existing buildings that contain vulnerable equipment, and moving equipment to upper floors where it is less likely to be damaged by floods.

As grid modernization and storm hardening plans are developed, advanced technologies will play a major role. Grid modernization such as the AMSC’s Resilient Electric Grid System, which incorporates superconducting cable, will become part of the grid. In the event of emergencies such as substation fires, flooding or terrorist events, these cables can move up to 4,000 amps of current, which is limited only by the availability of switchgears. Power will be able to bypass damaged substation equipment via submersible switchgears.

As microgrid technology progresses, it is expected to play a role in providing backup power to critical loads similar to CHP and backup generation. Despite current regulations that bar aerial drone operation, some utilities are exploring aerial surveying of their service territories after major weather events. Electric restoration could be reduced by five to seven days if more efficient damage surveying becomes available.

During extreme weather, many utilities focus on restoring the most customers as their first priority. During extended power outages, however, critical infrastructure should be restored first. Utilities should work with local communities to develop a comprehensive emergency response plan that focuses on communication and pre-identifies the critical facilities that should be restored first in the case of a hurricane or other disaster.

Larry Gelbien is a director in the energy practice at Navigant. He has more than 30 years of electric utility experience. Reach him at larry.gelbien@navigant.com.

Bilhuda Rasheed is a senior consultant in the energy practice at Navigant working on smart grid technologies. She has a master’s degree in technology and policy from MIT and has worked with the Pakistani government on utility performance and renewable energy.