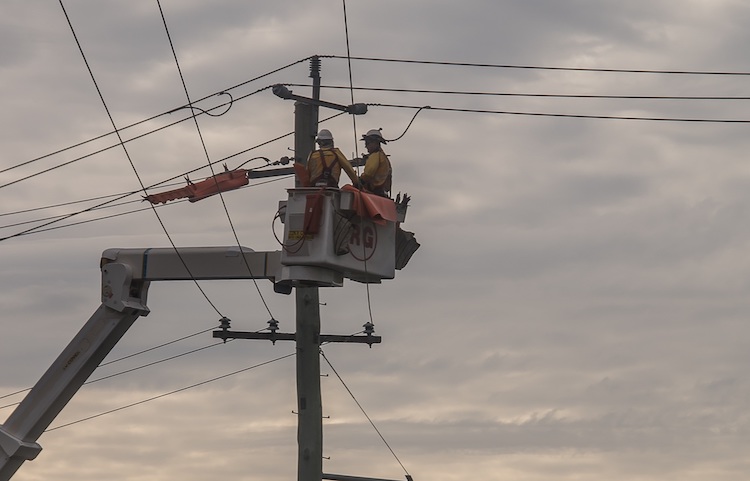 Company highlights crews during “Thank a Lineman” Month this April

For Tony Biscoglia, being a line worker wasn’t something he had expected or planned. In June 2007, he was looking to make a career switch and applied for an apprenticeship at Georgia Power.

“I came in knowing nothing about this kind of work, but Georgia Power offers a great training program and taught me everything,” he said. “It was brand new to me at the time, but I have found that it is a perfect fit. I enjoy working with a team and being outside every day.”

In his role as a lead lineman out of the Wills Road headquarters in Alpharetta, Biscoglia — affectionately called “Biscuit” by his colleagues — manages a crew of three to restore and repair infrastructure in the North Fulton community.

On a day to day basis, he enjoys being able to physically see what he has accomplished and help repair a necessity that individuals use every day. This is most important when a storm comes through the state or even across the country. In his 14 years with the company, Biscoglia has worked around Georgia to help restore power following hurricanes, tornadoes, and snow and ice storms.

As part of a mutual assistance network of thousands of utilities across the U.S. and Canada, Georgia Power is able to offer assistance and provide reinforcements when needed to restore power quickly. As a lineman, Biscoglia has worked on restoration projects in Texas, Alabama, Mississippi, and Louisiana.

“Those are situations that you know, without a doubt, that you are really helping people going through something tough,” he said. “You see line crews from all over the country that work together on what can seem like an impossible task.”

However, his most memorable experience was working in New York City following Superstorm Sandy in 2012.

“We spent two weeks staying in Manhattan and working in the surrounding towns and boroughs to restore service after Sandy hit the city as a hurricane and then turned into a blizzard.”

“Coming from the south, I wasn’t sure what to expect, but we met the most outgoing and nicest individuals who were so appreciative of our work. They kept bringing us pizza and donuts to show their thanks,” said Biscoglia. “After working 16-hour days, we made it fun though, and had the opportunity to do some sightseeing with other crews.”

When asked what the most rewarding aspect of his job, Biscoglia says without missing a beat, “I get the opportunity to work with people that I genuinely care about and that I consider my close friends every day.”

In the last few years, the husband and father of two sons, David and Miles, and one stepdaughter, Ava, has found himself moving into leadership roles in his career.

He frequently runs crews from the local operating headquarters and serves at the Alpharetta “union shop steward,” serving a liaison between the crews and local management.

“We are a hardworking group that likes what we do, and we have fun doing it,” said Biscoglia. “We realize that being a line worker is an important job and that safety is critical.”