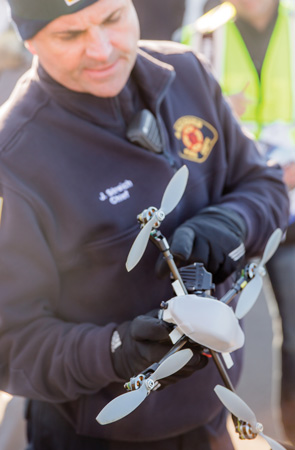 Last year when Motorola Solutions and the state of Minnesota began finalizing details of its broadband LTE Band 14 pilot test, officials agreed on two goals. The first was to design, deploy and evaluate the pilot results as part of the state’s ongoing collaboration with the First Responder Network Authority (FirstNet). The authority is charged with building, operating and maintaining the first high-speed nationwide wireless broadband network dedicated to public safety. As designed, all 56 U.S. states and territories must have radio access to a network connected to the FirstNet core network.

The second goal was to test the concept of a public/private partnership that could impact everything from the future physical deployment of the broadband network to valuable ongoing technical and financial support.

The Minnesota Statewide Emergency Communications Board (SECB) includes 20 government and public safety officials representing counties and cities statewide. The SECB provides governance for interoperable communications in the state, including the potential adoption and implementation of the Nationwide Public Safety Broadband Network.

As for private stakeholders, Great River Energy (GRE) was the first private partner to join the test. Headquartered in Maple Grove, Minnesota, GRE is a regional electric utility that serves about 650,000 businesses, homes and farms. The utility’s engineers helped draft the initial pilot plan and the company also provided an antenna site, equipment and technical expertise throughout the pilot test.

The Washington, D.C.-based Utilities Telecom Council said that GRE’s involvement was a significant milestone for broadband testing because it transformed this pilot into the first broadband network test in the U.S. conducted with an electric utility.

By the time pilot exercises began, the number of private stakeholders included Motorola Solutions, a manufacturer of broadband applications, devices and systems, and three other companies-NewCore Wireless, Sonim Technologies and Lociva-to provide hardware, software and technical support for the project at no cost to the state.

“Our vision for the pilot project was to clearly demonstrate that broadband is no longer simply a technological discussion…it is a reality,” said Mark Dunaski, deputy commissioner, Minnesota Department of Public Safety.

He said that he believes broadband networks will happen and those involved in public safety need to understand their benefits, determine how best to design and deploy them and how best to use their capabilities to save lives and protect property.

ECN’s director, Jackie Mines, said she believes that the pilot could serve as a facilitator for the entire broadband discussion between public safety agencies and private partners. She wanted to make broadband “real” for everyone and demonstrate how the system could operate, highlight its advantages and show the coverage that could be achieved.

For GRE, the pilot provided a unique opportunity to talk about broadband applications directly with public safety professionals. These conversations covered complex questions ranging from collaboration to spectrum sharing.

GRE had been researching ways to secure additional spectrum for its most important equipment monitoring activities. The utility believed that if it could secure a small amount of public safety broadband spectrum for vital functions such as its supervisory control and data acquisition (SCADA) process, it could better ensure power was available for public safety use, as well as for other critical service, recovery and restoration work in the communities GRE serves.

Licensing issues and the short timetable for the pilot interfered with testing spectrum sharing on the network. Motorola Solutions demonstrated in laboratory tests that a small amount of public safety broadband spectrum could be shared with an electric utility without compromising the availability of spectrum for public safety communications use.

Beyond the benefit of spectrum sharing, GRE believed establishing a collaborative relationship with public safety would enable it to apply its substantial expertise in handling large capital projects, offer substation properties as possible network sites, provide communication tower space and use its deep IT experience, all critical aspects to the broadband network’s success.

“We viewed the pilot as a chance for public safety agencies and utilities to view each other differently,” said Kathy Nelson, principal telecommunications engineer for GRE. “Public safety and utilities share the common mission of saving lives and property. Without power, rescue and restoration work is significantly compromised. We wanted to demonstrate that with a small amount of spectrum on the public safety broadband network and a guaranteed bit rate for our most critical needs, we could maintain power services even in the most challenging circumstances and not impact public safety’s communications requirements.”

Brett Kilbourne, vice president, Government and Industry Affairs and deputy general counsel for the Utilities Telecom Council, said he thought participating in the pilot could open some promising options for utilities and public safety.

“From a national perspective, we viewed the Minnesota pilot project as a first step in defining public safety agencies and utilities as public safety communications partners,” he said. “The test could demonstrate how both could share a common resource without compromising the mission of either. As potential system users, we also believed utilities could provide significant financial help that could ensure that the broadband network is economically sustainable.”

The setting for the pilot was Elk River, Minnesota, a town of 22,000 residents about 35 miles northwest of Minneapolis. It is a suburban community that borders on rural Minnesota. It provided participants the chance to test broadband coverage and performance outside the urban settings chosen for many other broadband tests in the U.S.

To provide participants a complete broadband experience, the pilot featured three individual parts that were performed on three separate days-a tabletop exercise that focused on building participant broadband understanding, an industry day exhibit that showcased Motorola Solutions devices that were to be used in the pilot and a functional exercise where participants used these devices in the “live” network.

The tabletop exercise was held in August 2015 and 72 public safety professionals from 43 agencies and organizations participated. The exercise was conducted and facilitated by experts from the U.S. Department of Homeland Security Office of Emergency Communications (OEC) and the Interoperable Communications Technical Assistance Program (ICTAP).

The industry day event was held immediately following a regularly scheduled SECB meeting in October 2015. The event included formal presentations from stakeholders who described the hardware systems, devices software and technical support they provided for the pilot.

The functional exercise completed the pilot’s broadband experience. Dozens of agencies participated in the exercise. Technical support and four mobile command centers were provided by the city of St. Cloud and Washington, Douglas and Sherburne counties. Washington County also provided a Band 14 vehicular modem with a Wi-Fi hotspot. This enabled Internet service to laptops at the Incident Command Post.

Elk River Fire Chief John Cunningham hosted the pilot events and said he wanted to provide an experience to which everyone would relate. The difference was that the only communications tool anyone could use was broadband over the “live” Band 14 network.

Conclusions From the Pilot

GRE believes this pilot has been successful in starting the broadband conversation between public safety agencies and electric utilities. But, gaining a consensus and support for a broader concept of public safety and resource sharing for communications purposes is a long-term undertaking. For some stakeholders such as Chief Cunningham, creating a “sandbox” in which everyone with a stake in broadband could explore options together is the type of experience that delivers the best and often surprising results.

Participants and stakeholders alike from Motorola Solutions, GRE and ECN agree that much was achieved in a short time.

“Success in designing and deploying these systems will depend on opening lines of communications,” Dunaski said. “It’s all about personal relationships, involvement and commitment.”

Kreg Christoff, MSSSI vice president and director has held multiple roles at Motorola Solutions for more than 25 years. He is experienced in direct and channel distribution, SCADA business development and system integration, and system architecture and design. His current responsibilities include overseeing Motorola’s North American utility sales. Christoff has successfully developed and served a wide array of stakeholder clients for SCADA monitor and control systems, including electric utilities, government agencies and water and waste water utilities.