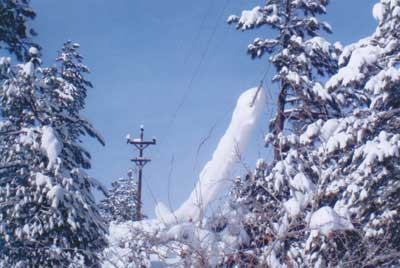 Consumers typically give little thought to their electric utilities when things are business as usual; power runs through outlets and lights turn on with a flip of a switch. When power outages strike, however, consumers immediately expect answers and guidance from their utilities.

Likewise, for utilities, power outages are one of the rare occasions when they must interact directly with ratepayers. Therefore, efficiently managing and restoring outages is critical for utilities in maintaining credibility and a positive public image. For municipal and cooperative utilities, in particular, customer satisfaction and trust are even more vital to operations.

We’re seeing power utilities increasingly recognize the value-from public relations and cost-savings perspectives-of investing in a system that will restore power as economically and efficiently as possible. As a result, especially in light of major weather events such as Hurricane Sandy, many utilities are starting to invest in more sophisticated outage management systems that are integrated with their advanced metering infrastructure (AMI) networks.

Like other utilities that had not upgraded to a multidimensional outage management system (OMS), LPEA primarily depended on customer calls to keep informed of outages. Despite adopting an interactive voice response (IVR) system, the co-op still generally lacked sufficient data to identify the locations or scopes of outages accurately when members called. The issue only escalated as many utages went unreported, whether because they occurred when no one was home, at night or in an unpopulated building.

As a result, LPEA was wasting significant resources and staff time on restoring outages. Because the co-op was forced to send trucks to investigate outages without a clear awareness of the scope of the problems, it was unable to allocate resources cost-effectively. The problem was only compounded with the large, sparse service territory where employees might drive more than 30 miles (perhaps on snow-packed dirt roads) only to find a problem had resolved itself or was bigger than anticipated and employees should have dispatched additional resources. 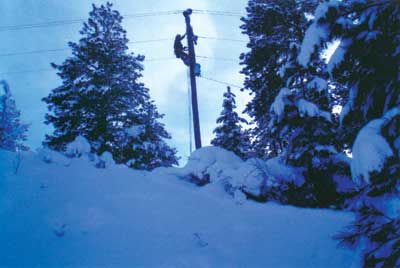 The tipping point arrived in the form of a large December 2007 storm. More than 9,300 LPEA customers lost power for nearly 54 hours as a result of broken power lines in rugged areas that often were difficult to access in the mountainous San Juan National Forest. LPEA crews worked as quickly as possible to restore power. They responded to 62 outages and repaired 75 individual problems.

LPEA crews were focused on restoring a damaged 115-kV Tri-State transmission line. Because of its size and prominent location, this line quickly became the priority, and crews were taken off other outage repair projects to focus on it. The co-op later found that almost as many customers had lost power because of assorted, smaller outages-not from that transmission line. Without visibility into the specific areas or causes of outages, LPEA focused the majority of its resources on solving one issue although customers might have been served better by diversified efforts.

Another result of the storm was simply getting information to members. The local radio station lost power and the newspapers shut down. LPEA had few options.

The storm and significant outages that followed accelerated LPEA’s interest in a more sophisticated OMS. In 2009, LPEA began looking into advanced OMS options. As the co-op decided to adopt an advanced metering infrastructure (AMI) deployment, it saw the opportunity also to integrate an advanced OMS system into the new AMI network. The result: LPEA reduced outage time by 20 percent and increased member satisfaction.

An outage management system is just a piece of software that relies on inputs such as IVR, smart meters, the AMI network and a supervisory control and data acquisition (SCADA) system to identify and diagnose a problem, then suggest a fix. Although an OMS can function with an IVR system-and even better with smart meters that push information-it performs best when combined with a robust, real-time AMI network.

AMI networks push back to the utility event-driven information it would not have received normally without an instant, automatic network. With advanced AMI, the system alerts staff immediately and automatically of outages via email and text, which allows them to gauge the full extent of the event instantly. The utility then can determine quickly whether it faces an isolated outage or widespread blackout and can dispatch and deploy crews more appropriately and more confidently.

AMI systems can interact with OMS in different ways. An AMI system with push capabilities, such as the Tantalus Utility Network (TUNet), can proactively tell the utility about outages and bring in information without the utility’s having to ask for it first. Alternatively, the meter can deliver information when asked, which is most useful when the utility is aware of the outage. Particularly advanced AMI networks, such as TUNet, also send thousands of meter-reading messages to the utility simultaneously, which can better represent the scope of a system event. For example, if there are 20,000 outages, TUNet will relay up to the utility with 20,000 unique messages, which then can be grouped, analyzed and reported directly to the utility’s staff.

A further, critical benefit of an AMI network is increased visibility. If an outage is visible remotely, field crews and operations can access the same data simultaneously to dispatch resources where they’re needed most. The utility also has better access to information about the progress of the restoration, allowing them to keep customers up-to-date-a critical aspect of maintaining positive customer relationships. Visibility also helps utilities automatically send alerts to key accounts prior to planned outages and can help utilities recreate outages for analysis and improvement.

Managing outages is particularly critical in the event of a storm or extreme weather such as Hurricane Sandy or even a common winter storm such as LPEA’s December 2007 storm.

During and after the storm, outage restorations are even more important than simple awareness of the outage’s existence. Once the damage from fallen trees or broken power lines is done, utilities must prioritize their crews. Utilities quickly must identify who has power and who does not so they can deploy crews and resources to where they can restore power to the most people while optimizing operational and cost efficiency.

With a robust AMI network, LPEA will know exactly who is without power and which neighborhoods are the most critical to focus resources on, which will help avoid situations such as the damaged transmission line in 2007.

Since 2009, LPEA has had a sophisticated OMS that has decreased outage time 20 percent. The co-op decided on Milsoft’s DisSPatch system in conjunction with Milsoft’s Porche IVR, Telogis’ AVL, C3 Ilex’s SCADA system and Tantalus AMI.

To help LPEA allocate its resources more effectively, its OMS uses an automatic vehicle location tool to help LPEA manage the dispatching of crews to the right locations. Overall, predictions are made quicker and more accurately with all components’ working together.

Today, LPEA also has customers’ phone numbers (up to three per home) built into its OMS. As a result, when customers call, the OMS automatically can identify their locations and provide them with outage details.

Overall, improving the response to outages has helped LPEA save money, reduce inefficiencies, and most important, keep members happy.

Dan Harms is a system engineer at La Plata Electric Association. He has worked 22 years in engineering and is a licensed professional engineer in Colorado. Reach him at dharms@lpea.coop.