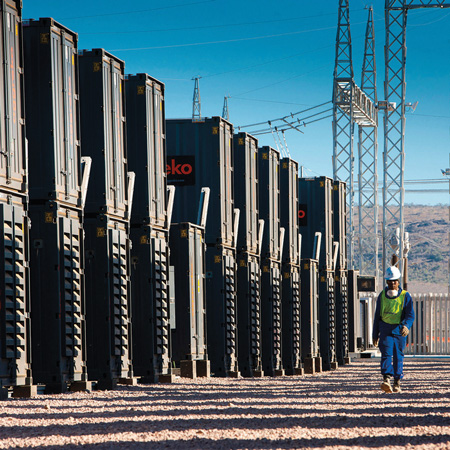 Planning Ahead to Minimize Disruption

Climate change and the growing risk of extreme weather conditions are detrimental to energy reliability, but the environment is only one factor increasing the risk of power outages. Aging or insufficient energy infrastructure, limited accessibility and increasing capacity demand are additional challenges for governments and electric utilities.

Energy providers, therefore, must make it a priority to implement measures to improve and maintain reliability, regardless of the challenges they face.

Reliability in Developed and Developing Countries

Reliability issues are not unique to developing countries. The number of blackouts in the U.S. has doubled in the last 10 years, according to the Department of Energy (DOE) and the North American Electric Reliability Corp. This increase is higher than in any other developed country.

Developing countries, such as those in Africa, face different challenges. Extreme weather, largely droughts, causes energy failure in areas that rely on renewable sources. Parts of Zimbabwe, for example, are currently suffering power shortages because the country’s hydropower capabilities were significantly restricted following one of the worst droughts in recent years. Hydro accounts for more than 70 percent of the country’s electricity generation, according to the International Energy Agency. Zimbabwe Electricity Supply Authority (ZESA), which contributes 60 percent to the country’s power capacity, faced diminished water levels in the Kariba Dam, which meant the national utility was challenged with finding an effective alternative power source.

Sakunda Holding Ltd., which imports and supplies fuels for Zimbabwe, understood the need for an alternative power source to offset the power shortage caused by the drought. The holding company, therefore, commissioned Aggreko in April, 2016, to provide 200 MW of mobile power for the next three years. This power solution will support the infrastructure that helps maintain the country’s economy and its communities’ living standards.

Anticipating and mitigating the risk of outages and blackouts can be challenging, so electricity providers should have a contingency plan. An on-site fleet of back-up generators enable the provider to avoid gaps or to coordinate emergency power to minimize downtime. Seasonal weather conditions are difficult to predict, but their impacts are not. Detrimental weather can affect power generation and delivery. Utilities, therefore, should expect the worst, plan ahead and integrate alternative sources of power in their long-term strategy.

Mitigating the risk of end-user power loss warrants not only considerable investment, but the development of new innovations. Modernizing the grid with new technologies that are fit for the future or maintaining generation and transmission infrastructure should be an on-going priority. This in itself, however, can cause disruptions, albeit planned. In some cases, the upgrade process can take between two to five years, creating a significant risk to reliability and a utility’s ability to meet capacity. With disruption to end users often resulting in financial penalties, it’s in everyone’s best interest for these to be prevented or minimized.

Utilities’ customers are becoming less and less tolerant of electrical interruptions. Even planned downtime, resulting from efforts to upgrade energy infrastructure and improve reliability, is no longer justifiable. Modular power plays a significant role in these cases-filling the gap while the grid is down.

For example, rather than interrupt power for small periods of time (four to eight hours) on several occasions (10-15 times), the energy provider could use modular power as a short-term solution to prevent downtime and complete the upgrade or maintenance at once. Not only does this avoid disruption to end users, it also can improve productivity and efficiency within the upgrade process.

Return on investment in upgrading the network is another important consideration for energy providers. Not only is aged infrastructure less efficient and more prone to failures, it also is more vulnerable to environmental damage, particularly in rural regions where transmission lines can be hundreds of miles long.

Rural power distribution brings with it a specific set of challenges. In addition to building costs, the length of distribution lines and their susceptibility to harsh weather conditions cause maintenance problems across extensive and often disparate sections of the grid.

Upgrades to this type of infrastructure can cost operators millions of dollars. The cost of these upgrades impacts decisions about powering rural communities, as the higher-voltage lines necessary for this operation are far more expensive than those needed to reach urban communities. If there’s only a small population and low capacity demand at the end of that line, the utility is unlikely to be able to recover the cost.

Decentralized generation is a viable solution here. Not only are local populations provided with an efficient, reliable and accessible power source, the investment is considerably lower as is the risk of widespread disruption. Decentralized energy is being used more often on the African continent, where many national grids are unreliable or in their infancy. With such a significant rural population and environment, it’s often the better fit. This is also the case in some regions of Australia and North America.

While independence from the grid mitigates the risk of large-scale network disruption and the necessary costs to upgrade, implementing a back-up (and a back-up for the back-up) source should be the first priority.

Electricity is often taken for granted, particularly in Western countries, but with a rising risk of cyberattacks on our grid networks, aging infrastructure, extreme weather events and blackouts caused by increased capacity needs, emergency power is mission critical. Even brownouts, resulting from intentional reduction in load during emergencies, can have considerable impacts on end users, especially commercial and industrial end users.

Short term contingency planning, whereby on-site emergency generators are instantly switched on or acquired, is mission critical and can have massive economic value. In the U.S. alone, each blackout could potentially cost hundreds of millions of dollars in economic losses. An uninterruptable power supply should be a vital part of any energy strategy, whether for a business or energy provider. Considering capacity needs, accessibility, available space and risk of potential disruptions is fundamental. The flexibility, mobility and small square footage of modular power makes it an ideal candidate for emergency power needs.

Integrating modular power into any outage strategy can improve not only reliability but also flexibility and efficiency. As existing infrastructure continues to be upgraded and modernized for future use, putting a short-term solution in place to keep the lights on in the meantime is beneficial in the long term.

Michael Clarke is Aggreko’s head of utilities for North America. He has nearly 30 years of experience in the power generation industry from temporary projects to permanent systems. Having worked with Aggreko for over 20 years, his current role has a full time focus on utilities in North America, including transmission and distribution, power generation and renewable power.