After unsatisfactory operating results in the early 1930s, 26 months of operating experience with repeater fuses on Kansas City Power & Light Co.’s (KCPL’s) rural and semi-rural distribution lines reveals their performance justifies their use.

Stories of heroism and devotion to duty are sung of English electric utility companies’ workers. Many arrive to work on time the morning after their houses were destroyed by bombs during Nazi night raids. Much of the country’s continued flow of electricity comes from prewar preparations. Utility industries trained for raids, electric distribution systems were sectionalized, emergency stocks were built, assets were protected with sand bags, increases were seen in production and rates, production of appliances were restricted, factories were given repair priorities, installations of air raid shelters skyrocketed, prewar labor agreements were met to reduce strikes, and self-rationing of public electric usage contribute to England’s continued flow of electricity. 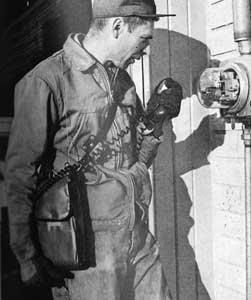 Thorntown Utilities in Indiana reports the addition of a two-way radio has decreased the time required to read meters by 50 percent.

How secure is your computer and what it controls?

LeeMah DataCom Security Corp. holds the world’s first Hacker Challenge and invites computer hackers from around the world to retrieve a message stored on one of the company’s locked computers. Hackers are given the phone number to the computer and seven days to retrieve the data message. Despite 7,476 calls, the system prevents any unauthorized computer access.