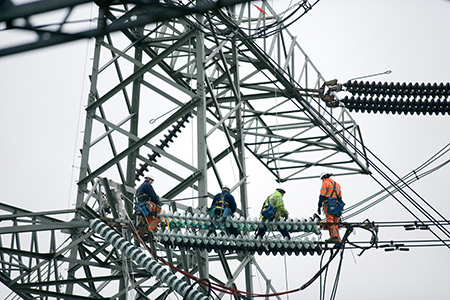 Dozens of National Grid crews from across upstate New York, Massachusetts and Rhode Island will be assisting utilities in Pennsylvania and Connecticut with electricity service restoration in the wake of severe thunderstorms on Tuesday.

“This sort of coordinated response has become the industry standard, and is built on a long tradition of utilities helping each other when trouble strikes,” said John Bruckner, senior vice president of U.S. operations at National Grid. “We frequently call on our fellow utilities for assistance, and it’s important that we return that favor.”

Fifteen two-person crews and supervisors — five each from National Grid’s Eastern, Central and Western Divisions — left this morning for Philadelphia to assist PECO crews in restoring power to some 150,000 customers who were without service. PECO is the largest electric and natural gas utility in Pennsylvania. Tonight, another 15 crews out of New York, and 15 from Massachusetts, will supplement the existing National Grid crews’ efforts in Philadelphia.

PECO has estimated that restoration in some of the harder hit areas just west of Philadelphia could take several days. This afternoon, five two-person crews and supervisors from Worcester, Massachsetts, and another five crews from Rhode Island, were heading to New London, Connecticut, to help Eversource with storm restoration. In addition, National Grid has released about 100 contractors to help with the effort.

National Grid’s crews will work under the direction of PECO’s and Eversource’s storm restoration officials and are expected to remain in those regions until all service is restored. In total, National Grid is sending 55 crews (more than 120 employees) to assist.

The crews were dispatched in response to a request made through a coordinated system of mutual response. National Grid is a member of the North Atlantic Mutual Assistance Group, which responded to requests for resources from member companies from the Mid-Atlantic region.