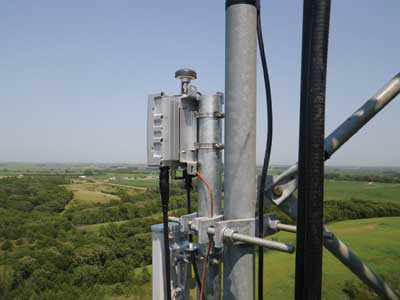 From 30,000 feet above rural northeastern Nebraska, the plains below appear as an endless array of green crop circles. These are farmers’ fields that use center-pivot irrigation systems. Each system has a radial sprinkler arm, a pipe usually a quarter-mile long and raised above the crops on wheeled towers. The arm slowly rotates around a central hub that contains a well and electric motor that drives both the arm and well pump, taking up to three days to irrigate an entire field. Water is drawn from the huge Ogallala Aquifer hundreds of feet below ground. Power comes from the local utility. In Cuming County, that’s the Cuming County Public Power District (CCPPD).

Farmers with irrigation operations like these make up most of CCPPD’s 300 commercial customers. That’s out of 4,000 total accounts across its 620-square-mile service area. The farmers’ irrigation demands on the CCPPD grid peak in the summer growing season and are subject to a load-balancing program, said Elwood Moore, general manager at CCPPD.

“Of course, it depends on rainfall,” he said. “The less there is, the more they must water, and the more we have to manage the load on our grid.”

Given that Cuming County gets just 75 percent of the U.S. average annual rainfall, its farmers must water their crops-mostly thirsty corn and soybeans-a lot. Added to their seasonal load on the CCPPD grid are summertime air conditioning demands by residents and local businesses, despite the county’s relatively sparse rural population.

Moore said the CCPPD offers discounted rates to irrigation customers who take part in its load-control program. Using supervisory control and data acquisition (SCADA) telemetry through 12 remote substations, the program monitors the power drawn by irrigation customers’ systems and turns the systems off when their loads exceed preset limits.

“A typical load in the summer is about 25 megawatts,” Moore said, “and with our load-control program, we try to dial it back to about 70 percent of that.”

CCPPD buys its electricity from the Nebraska Public Power District (NPPD). Like many utilities, NNPD uses a progressive rate schedule to encourage conservation.

“When heavier loads force us into higher-cost rates, it raises our power bill and those of our irrigation customers,” Moore said. “It can increase their bills by as much as $2,500 a year.”

“We couldn’t see real-time loads,” Draper said. “We’d have to poll all of our substations to see what the loads are, then shut off enough irrigation wells to reach our predetermined levels. Some guesswork was always involved, and we’d overcorrect to play it safe. But this meant shutting down some wells unnecessarily and for longer than needed.”

Draper said the load-balancing process required a CCPPD employee to take hours each day to oversee the SCADA system’s pre- and post-polling of the irrigation systems and substation load, plus do manual calculations. With just 18 employees-eight of them linemen in the field-this chore was a considerable staff burden.

Draper said CCPPD’s aging SCADA system faced a forced shutdown for two reasons: 1), the Federal Communications Commission (FCC) narrow-banded the 450-megahertz radio frequency system, which would have meant replacing hundreds of radios; and 2) the system’s software vendor announced it would end support for what CCPPD was using.

“Clearly it was time for us to move on,” Draper said.

About this time, the U.S. government made its existing Smart Grid Investment Grant (SGIG) program part of the American Recovery and Reinvestment Act of 2009.

It provided funds to cover half the costs of projects that would help modernize the nation’s electric grid. CCPPD’s need to upgrade its SCADA system qualified. It applied with a neighboring utility that had similar requirements, and together they won the funds needed.

CCPPD’s new network architectural design came from the work of the Siemens RuggedCom professional services team. Before specifying any components, they conducted a comprehensive site survey and radio frequency (RF) propagation study. The investigations helped their RF-channel planning and system design, which helped facilitate the implementation of the physical network and network management system (NMS). The project also included one year of priority support.

The backbone of the CCPPD system architecture is a redundant, microwave backhaul ring on five 90-foot towers with throughputs of up to 200 Mbit/s. It’s linked to each CCPPD substation and the main office data center with a Siemens RuggedCom RX1500 series integrated Layer 2 and Layer 3 switch and router.

Connected to the RX1500 are WIN 7237 outdoor wireless base stations that comply with the IEEE 802.16e WiMAX standard.

CCPPD obtained an FCC license to use the 3.65-gigahertz radio frequency, which is one of nine spectrum options the WIN family offers.

The WIN 7237 uses MIMO technology to provide increased coverage capability and up to 40 Mbit/s throughput to CCPPD substations-some as far away as 13 miles. To deal with the line-of-sight issues of low-lying substations, CCPPD installed repeater systems using WIN 5237 subscriber units on the receiving end (interconnected with a WIN 7237 base station via an RS900, a nine-port, Layer 2, fully managed Ethernet switch). 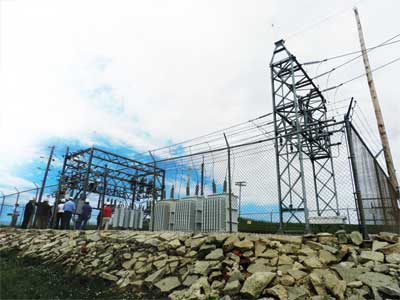 Each substation also has one of these subscriber units, along with an RSG2100 19-port, fully managed fast/gigabit Ethernet switch to interconnect all the substation’s intelligent electronic devices (IED)s. For those devices that need copper connections, CCPPD installed an RMC40, a four-port, Layer 2, unmanaged Ethernet switch with up to 100 Mbit/s speeds.

To reduce cabling costs, all the RuggedCom devices are powered via the RP100 single-port 802.3xx Power-over-Ethernet (PoE) injector.

“We chose Siemens RuggedCom components because we knew all of its gear is utility-grade and up to the harsh outdoor conditions we have here in rural Nebraska,” Moore said. “A lot of manufacturers will ruggedize their standard products, but we know the reliability and durability of RuggedCom products is designed and built-in, not added on.”

Installation and commissioning of the gear was fast and easy, Draper said. Siemens trained CCPPD linemen on the particulars of microwave base station and subscriber installation, who then installed the equipment on the microwave towers and existing utility poles without problems.

“It was supereasy, pretty much plug-and-play,” he said. “Establishing line-of-sight for the subscriber units was simply a matter of positioning them for maximum signal reception.”

To monitor, configure and maintain all the RuggedCom components across the microwave towers, 12 substations and repeater stations, Draper uses the company’s network management software, which his team can access from any device with a standard Web browser. With its auto-discovery capabilities, he has real-time visibility and notification of events, thresholds and alarms throughout the network. If necessary, he can do remote resets, which save expensive linemen truck rolls.

With the network, Moore and Draper can get real-time data about the CCPPD grid through each of its substations. This includes peak amps per phase, neutral amps, kW, kVar and power factor of each circuit and totals in each substation.

“In addition, we monitor voltage and tap position of each regulator,” Moore said. “We can also see the electronic breaker panel faceplate, which gives us breaker status and fault current of any breaker trip and the number of operations.”

This real-time data feed has freed the person who used to manually monitor and manage the irrigation load control program, Moore said. 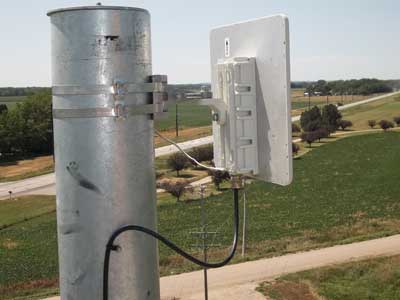 “It was very time-intensive and often tedious, so now we have that person doing other things that are more valuable to us,” he said. “Plus, with real-time data, we don’t have any latency issues anymore. By taking out all the guesswork, we can be much more precise and don’t have to overcorrect just to be safe in managing our grid loads. We can see what’s happening on each of four circuits that connect to each substation.

“This is helping us be 10 to 20 percent more efficient in using our power supply, which translates to tens of thousands of dollars a year in savings to us. And that’s not to mention our customers’ savings.”

Since the installation of the network, Draper said, it has survived three major hail storms and a pair of tornados. One of the twisters was an EF4-one step down from the most violent rating-that destroyed a small town in the next county. Although the winds knocked the microwave transmitters out of alignment, the equipment was unaffected.

“A lineman brought in one of the RuggedCom base stations because hail had shredded the cable and conduit going into it,” Draper said. “But I plugged it in, and it worked just fine.”

“That’s where a lot of the RuggedCom gear is located, so if we can do resets, reconfigurations and troubleshooting from here in the office, they’re not put in harm’s way,” Draper said. “But if they do need to replace a unit, we can switch our breakers on that particular circuit to one-shot status.”

It takes a lineman only a few minutes, he said.

Moore and Draper envision many other services they could operate over the WiMAX network’s ample bandwidth. One example is having a Wi-Fi hotspot at each substation to provide linemen and technicians information and communication access. Another is video surveillance.

“Frankly,” Moore said, “we have just scratched the surface of what we can do with this system.”

What would you do with an interactive model of the entire US electricity system?