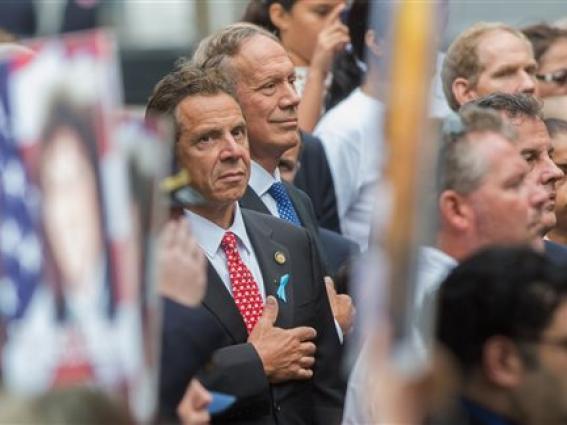 ALBANY, N.Y. (AP) — New York state has set some of the nation’s most ambitious goals on fighting climate change, but some activists say it isn’t moving fast enough.

Lawmakers holding budget hearings this week faced protests from environmental and left-leaning groups who criticized the lack of new solar and wind projects breaking ground in the state. Protesters filled rows at a hearing to call for the state to do more to boost electric vehicles and energy efficiency and block construction of infrastructure for natural gas, which contributes to global warming.

But New York needs to do much more to match the “urgency of the climate crisis,” he said.
Gov. Andrew Cuomo, a Democrat, has made fighting climate change one of his top priorities for 2020. He pushed for a law that set challenging goals for shifting New York to cleaner forms of energy. The state aims to have 70% of its electricity come from renewable energy by 2030, and to become emissions free by 2040.

Still, the state has a long way to go to reach its environmental goals.

Just 5% of New York’s electricity came from solar and wind in 2018, according to New York Independent System Operator, which oversees the state’s electricity supply. Nuclear and hydropower represented 53% of produced energy, while the remainder largely came from oil and gas.

New York generated about 206 million metric tons of greenhouse gas emissions in 2016 — about 3% of the country’s total emissions. That’s a 13% drop from 1990, according to New York State Energy Research and Development Authority. About 44% of carbon-dioxide emissions came from the transportation sector.

Activists are calling for more investments in mass transit, public control over utility companies and higher taxes on the wealthy to fund climate change efforts. The Movement for a Green New Deal Coalition, which is made up of several environmental and left-leaning groups, says Cuomo’s recent promise for $33 billion of spending on climate change over the next five years is largely made up of money the state was planning to spend anyways.

Bambrick said the state should have a dedicated fund that would help pay for the infrastructure necessary for clean energy resources and help transition off fossil fuels.

Department of Environmental Conservation Commissioner Basil Seggos said at a Monday budget hearing that it’s unclear how much the state needs to spend annually to reach its goals. He said the state is in a “financial crunch” and praised Cuomo’s proposals to invest in environmental protection and clean water infrastructure this year.

“What we have in front of us now is a significant down payment toward what we know we will need,” Seggos said.

New York lacks enough transmission lines to link renewable energy projects in upstate New York and off the Atlantic cost with the rest of the state, according to the body that oversees the state’s electricity supply. That body is pushing for the state to put a price on carbon to make it more financially enticing for energy suppliers to develop more wind and solar projects.

The Cuomo administration has also said many communities restrict solar and wind projects due to local and environmental concerns.

“From my view, I see the goals, I see the timeline, and I see a process that frankly is a bit broken,” Seggos said.

It takes five to 10 years to start construction on renewable energy projects in New York, according to Cuomo. He used his recent budget address to propose letting the state acquire potential sites for renewable energy, build out transmission, permit the projects and “deliver shovel-ready projects” to developers.

That proposal drew praise from environmental advocacy group New York League of Conservation Voters. “To achieve the bold goals set out in the Climate Leadership and Community Protection Act, the state must significantly improve the pace of siting renewable energy and transmission lines,” the group’s president Julie Tighe said.

His administration has yet to release specific details. Cuomo also proposes a “quick start” for privately initiated renewable energy projects.