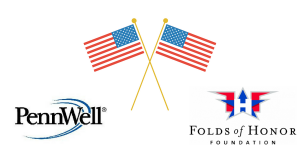 In commemoration of Flag Day, PennWell Corp. is partnering with the Folds of Honor Foundation to raise money for military families.

The effort is in conjunction with PennWell’s Wall of Honor, a traveling wall highlighting the names of our military service personnel (past and present) and displayed at all PennWell power generation events in North America. The wall displays the branch, the company and the name of each person honored.

PennWell’s partnership with the Folds of Honor Foundation, a nonprofit organization, is an extension of the Wall of Honor and will help further honor the legacy of those listed on the Wall. Financial contributions to the Folds of Honor are used to educate the families of military men and women who have fallen or have been disabled while on active duty in the United States armed forces. Click here to make a contribution.

Founded in 2007 by Major Dan Rooney, an F-16 fighter pilot in the Oklahoma Air National Guard who served three tours of duty in Iraq, Folds of Honor is proud to have awarded scholarships in all 50 states, as well as Guam, Puerto Rico and the Virgin Islands, including more than 2,800 in 2016 alone. Folds of Honor is a 501(C)(3) nonprofit organization.

To submit your name (or a colleague, friend or family member), click here. The name will be added to PennWell’s Wall of Honor on display at all PennWell power generation events in North America.