Despite substantial increases in smart grid investment during the past several years, the American Society of Civil Engineers gave the U.S. grid the same D+ rating this year as it did in its previous assessment four years ago.

Smart grid, as defined by the Department of Energy, “is an electrical grid that uses computers and other technology to gather and act on information, such as information about the behaviors of suppliers and consumers, in an automated fashion to improve the efficiency, reliability, economics, and sustainability of the production and distribution of electricity.”

Surprisingly absent from this definition is improved capacity. The Energy Policy Act of 2005, developed in the wake of the August 2003 blackout, called for and provided a framework for incentives to leverage technology to “improve the efficiency, reliability and capacity of the grid.” 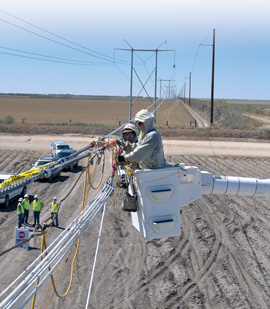 Although gathering information about the behaviors of suppliers and consumers as described in the DOE definition might help defer generation investment, the current definition of smart grid has little to do with the grid. A grid without adequate capacity cannot be considered efficient, reliable or economically and sustainably able to support the production and distribution of electricity, especially as new sources of generation are brought online. The grid needs added capacity to enable the integration of new generation resources, accommodate growing demand, alleviate grid congestion and improve grid efficiency and reliability. Computers and information technologies, alone, as described in the DOE smart grid definition, have practical limitations.

For instance, on Aug. 14, 2003, the Northeast U.S. and Ontario, Canada, experienced the second-most widespread blackout on record at that time (after Brazil in 1999), which affected 55 million people. Six weeks later on Sept. 28, a similar outage occurred in Europe. It affected 56 million people. According to the final North American Electric Reliability Corp. (NERC) report, many factors caused the U.S.-Canada blackout, including: inaccurate telemetry data used to operate the Midwest Independent Transmission System Operator (MISO) “State Estimator” (and a subsequent computer re-boot failure); a race condition computer bug in FirstEnergy’s energy management system; and three 345-kV transmission line trips (outages) that resulted from excessive conductor sag, which led to a cascading of similar sag-trip outages on its 138-kV system. These events and lack of effective communication among other utilities shut down 508 generating units at 265 power plants. The economic impact was estimated to approach $10 billion.

On July 30 and 31, 2012, a similar series of cascading outages in India affected more than 670 million people. At the time of this writing, it is not known what sequence of events caused these blackouts, but initial reports suggest a shortage of generation capacity and substantial grid limitations. As the industry strives to modernize the transmission infrastructure in the U.S. and abroad, it must consider the significant roles efficiency, reliability and capacity play in the smart grid strategy.

Although more than 17,000 miles of new transmission assets are planned for installation in the U.S. during the next five years, permitting and siting issues still can delay or prevent the critical lines from being installed. As the industry considers a smart grid definition, objectives and strategy, it must consider the importance of smart policy, as well. A well-designed policy might allow the industry to anticipate and adapt to changing needs, fully leverage new and potentially remote sources of fuel, generation delivery or both, consider new energy storage technologies and help streamline the planning and permitting process, especially as it relates to interstate projects or other projects that must accommodate multiple jurisdictions. 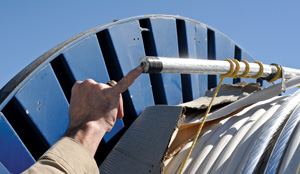 Efforts to develop a national energy policy continue, but utilities are doing many smart things in the meantime to improve grid efficiency, capacity and reliability. One method is to leverage conductor technology that allows a substantial increase in capacity on existing transmission and distribution lines. Increasing line capacity helps alleviate grid congestion, which remains prevalent in the Northeast and Southwest U.S., and can improve grid reliability. Higher-capacity lines can help prevent outages to load centers when adjacent lines unexpectedly drop out of service, occasionally because of storm damage. 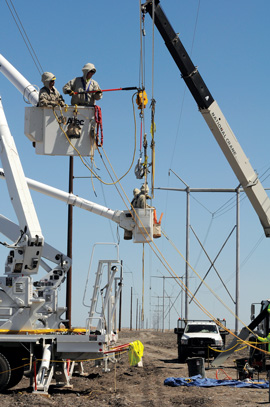 Reducing congestion on constrained transmission lines also can reduce the cost of delivered power to commercial and industrial customers that otherwise might be forced to relocate or cease operations. The need for reliable, affordable electricity is a key component of any healthy, productive economy, and the technology exists to alleviate it. A smart policy can help ensure all parties benefit when constrained transmission corridors are opened to less expensive generation sources.

American Electric Power Co. Inc. (AEP) is one of the larger U.S. utilities that has taken advantage of new conductor technology to improve the efficiency, capacity and reliability of its grid. AEP’s most recent project involves the installation of more than 1,440 miles of a high-capacity, low-sag conductor on a 345-kV reconductor project in Texas. The line is being upgraded while it remains energized because of substantial demand and continued area growth. This live-line reconductoring project is being performed by North Houston Pole Line, a division of Quanta. The project is ongoing and is slated for completion in early 2016.

The conductor AEP selected uses a hybrid carbon fiber core that is 50 percent stronger and 70 percent lighter than steel, has a very low coefficient of thermal expansion, and is impervious to corrosion, an important consideration in the Gulf region. Because the core is so much lighter than a conventional steel core, the conductor also incorporates about 28 percent more aluminum (without a weight penalty), which decreases electrical resistance. Decreased electrical resistance reduces line losses by 25 to 40 percent or more depending upon load level. Considering that 8 to 10 percent of all electricity generated is lost during transmission and distribution, a reduction in line losses can help achieve smart grid objectives.

A reduction in line losses can conserve fuel resources and potentially reduce emissions, plus it can reduce generation capacity requirements. In other words, the generation that normally would be required to support those losses can be redeployed elsewhere. If a primary goal of the smart grid is to defer generation investment, reducing line losses using advanced conductors is right on target. In 2005 after AEP completed its first installation of an advanced conductor on a relatively short 15-mile line, it realized a savings of 0.9 MW; however, because of the conductor’s improved efficiency, AEP also reported an additional 0.2 MW in overall system savings as it reduced stress on adjacent lines.

Technologies are being deployed to help create a more efficient, robust, modern and smart grid, but without a unified and smart policy, the U.S. might have difficulty raising its D+ rating. Considering the limited financial resources available and the magnitude of the challenge, let’s hope policymakers can keep up with the rapidly evolving technology and put those resources to maximum use.

Dave Bryant is director of technology at CTC Global and was one of the original developers of the ACCC conductor and ancillary hardware components. His background in composite materials, testing and industrial design helped expedite the commercialization of the ACCC conductor.