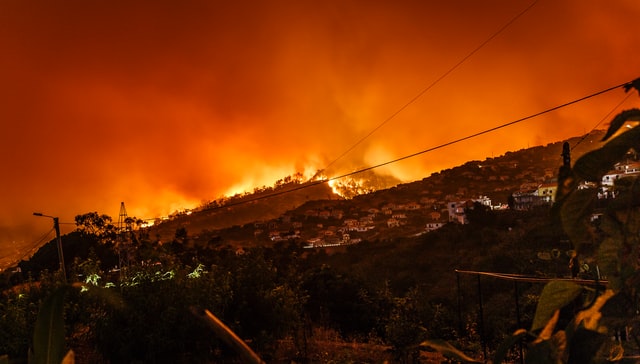 SAN FRANCISCO (AP) – Investigators are looking into the possibility that tree branches hitting Southern California Edison electrical equipment may have sparked a fire in the mountains near Los Angeles that destroyed nearly 90 homes, the utility said Monday.

A 23-foot-long line of conductor and three tree branches will be examined by the U.S. Forest Service, which is investigating the cause of the Bobcat Fire, SCE said in a letter Monday to the California Public Utilities Commission.

The fire began on Sept. 6 near in the Angeles National Forest. It was 92% contained Monday night after burning through nearly 181 square miles (468.6 square kilometers) of land.

Utility equipment has caused some of California’s deadliest and most devastating fires in recent years as high winds knocked down power lines or drove vegetation into them.

Last week, Pacific Gas & Electric said that investigators looking into what caused a wildfire that killed four people in far Northern California had seized some of its equipment.

In a Friday filing with the PUC, the utility said the California Department of Forestry and Fire Protection took some of its equipment near where the Zogg Fire started on Sept. 27.

Driven by high winds, the fire roared through Shasta and Tehama counties, destroying more than 200 buildings, about half of them homes. It was nearly fully contained by Monday night.

PG&E, the nation’s largest utility, said Monday that it may cut off power to as many as 50,000 customers in portions of 21 northern counties – including Shasta and Tehama counties – as a precaution, beginning as early as Wednesday afternoon.

“Hot and dry conditions combined with expected high wind gusts pose an increased risk for damage to the electric system that has the potential to ignite fires in areas with dry vegetation,” PG&E said in a statement.

PG&E recently emerged from bankruptcy stemming from financial fallout from several devastating wildfires caused by its utility equipment that killed more than 100 people and destroyed over 27,000 homes and other buildings in 2017 and 2018.

More than 12,000 firefighters continue to work on 14 major fires or complexes of fires around California. Containment continued to increase Monday but the weather was again turning hot and dry, and forecasts called for the kind of winds that historically have fanned conflagrations during fall.

More than 12,000 firefighters continue to work on 14 major fires or complexes of fires around California. Containment continued to increase Monday.

More than 8,400 wildfires this year have burned well over 4 million acres (6250 square miles, or 16187.4 square kilometers) in California, mostly since mid-August. There have been 31 fire-related fatalities and more than 9,200 structures have been destroyed.