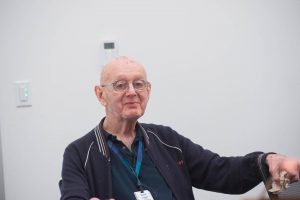 Dwight Eisenhower was president of the United States when Joe Hills started work for G&W Electric. Eleven other chief executives later, he is still showing up and getting the job done.

Hills, in his 80s, was 18 in 1955 when he and several high school friends joined the then-small G&W Electric. The company has gotten a little bit bigger, but apparently Hills still feels very much at home and isn’t yet planning retirement yet.

“You have to stay active, mentally, and physically,” he said. “If you retire, you need something to keep you busy.”

Hills spent more than 30 years of his career in the Cable Accessories division, helping run the day-to-day business in splice kits. He pulled and packaged all materials needed for utility linemen.

“There had to be over 300 part numbers in splice kits, and he had them all memorized and could walk you right up to them,” a G&W production manager recalled. “He took pride in his work and made sure every kit was correct before he put his name on it.”

Hills’ nickname at G&W has been “Popeye” because he always wore a t-shirt, even in winter months and apparently had the arm musculature to justify it, a former co-worker noted.