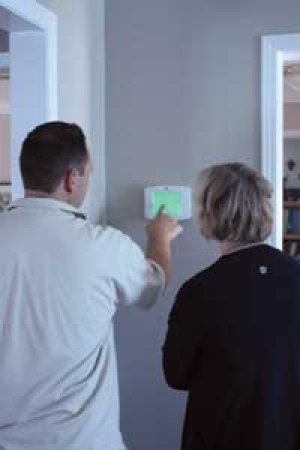 Children nearly burst with pride when they conquer the complicated task of correctly spelling Mississippi or remembering what the acronym SCUBA actually stands for. The same can be said for industry newbies when faced with one of power’s favorite acronyms, SCADA. When you can blurt out that it properly stands for supervisory control and data acquisition, you’ve formally arrived.

Like SCUBA, SCADA may be a difficult acronym to remember, but it’s relatively easy to define: It’s the brainstem of power, especially on the T&D side of the equation—the computerized wizard in the land of electricity (sometimes a rather emerald land including wind farms, sometimes not). Traditionally, SCADA was the smart part of electricity delivery infrastructure before smart grid came along. Now that a more intelligent grid looms on the horizon, how are the industry’s SCADA systems weathering the changes?

Devil in the Details

With the acronym SCADA identified, it’s important to look behind the Oz curtain to the acronyms it often includes, such as: HMIs (human-machine interfaces), RTUs (remote terminal units) and PLCs (programmable logic controllers). A large computer system and some communication infrastructure are normally included, too.

The bottom line: A SCADA system sorts data. It brings data in, stores it and communicates with and about it.

As ABB notes in its online overview of SCADA (available on ABB’s website), the parts that make up a SCADA system for the power industry date back to the 1920s when electrification began. The first model of a SCADA-esque computer network, however, came in the 1960s with the advent of modern computerized process controls. Back then, though, each customer was unique, given an islanded system that really worked for that customer alone.

In the 1980s, vendors and utilities were introduced to more standardized, interactive systems across larger networks, and SCADA use became common at utilities.

According to a Newton-Evans 2010 study titled “The World Market Study of SCADA, Energy Management Systems and Distribution Management Systems in Electric Utilities: 2010-2012,” only 3 percent of the 118 utilities participating in the study had no use and no plans for an EMS, SCADA or DMS system. (1 percent reported plans to implement a system by 2012.) That’s up from 95 percent of respondents that had a control system in place in 2008.

“The role of communications-centric control systems used for power delivery (transmission and distribution) will continue to serve as the cornerstone of smart grid development,” said Chuck Newton, president of Newton-Evans Research. “Whether we discuss distribution automation, substation automation or even infrastructure equipment, as our primary field equipment becomes “Ëœsmarter’ with each new generation of product development, we continue to rely on the extension of SCADA-based technologies and the applications software that drives operational performance excellence.”

What Newton-Evans Says About Today’s SCADA

Beyond a look at how important SCADA is in the care and feeding of power systems, the Newton-Evans study reveals other things about SCADA.

First and foremost, a number of utilities are happy with the current state of their SCADA/EMS/DMS and don’t plan to change much before 2012, although some do plan to upgrade and retrofit their systems (see table).

Among mid-size system (SCADA/DMS) vendors mentioned in the recent study, ACS leads the way overall with 18 mentions, followed closely by Survalent with 17. Larger systems installations (EMS/SCADA) were represented by AREVA with 14, OSI with 12, and Siemens and GE tied with 10 (see Figure 1).

While few changes are occurring in the EMS/SCADA/DMS arena, a lot of linking is taking place. Connections to other utilities led the external link category at 66 percent followed by links to historical records at 58 percent. Other links noted by more than one-third of the respondents include backup control center links, outage management systems links, power plant DCS links and load management/load control system links (see Figure 2).

Large investor-owned utilities (IOUs) were most likely to have outside links in place (84 percent to other utilities; 68 percent to historical record keeping systems; 64 percent to backup control sites; 60 percent to an independent system operators/regional transmission operators and 60 percent to power plant DCS units.) In addition, the study revealed IOUs were the most likely to form plans and strategies for new links to AMR/AMI, DA/DMS, enterprise systems, phasor data concentrators (PDC) and meter data management links.

Back to Those Devilish Details

Utilities have done much with the acronyms inside the system, PLCs, RTUs and others. Respondents had installed 32,615 pole-top RTUs at the time of the survey. Substation RTU counts totaled 16,689 units with an additional 1,069 PLCs installed. Bay controllers numbered 621, while substation controllers totaled 825 units. Some 204 synchrophasor measurement units were reported, along with 170 substation-based PDCs.

Respondents revealed plans for adding more than 11,000 poletop RTUs, along with more than 1,000 substation RTUs and some 155 new PLCs.

With these computerized endpoints and links, 54 percent of the survey respondents indicated having cyber security concerns with platform integration.

Despite interop security concerns, SCADA took the top spot as the most important smart grid component. Respondents ranked control systems at the top of the smart grid list, followed by AMR/AMI. Protection and control came next, followed by outage management systems, which squeezed in just slightly ahead of substation automation (see Figure 3).

The power industry’s favorite acronym, SCADA, continues to thrive, especially in the growing intelligence arena, as noted in the Newton-Evans study. The future for SCADA is bright. Control room-based systems typified by EMS, SCADA and DMS will continue to be the key systems for control and monitoring of electric power operations—all the while undergoing frequent changes and incorporating additional levels of data. The state of SCADA is certainly in flux.

The technology behind SCADA continues to evolve as do the needs of utilities now concerned with cyber security, situational awareness, visualization, communications assurance and the integration of more and more field equipment into the asset mix to be monitored, controlled or both, he said.

Editor’s note. SCUBA stands for self-contained underwater breathing apparatus, in case you’ve forgotten since your childhood attempts at memorizing it.

Newton-Evans’ study sample represents about 35 percent of the North American market in terms of customers and about 30 percent of all substations and T&D line miles.