Working on power lines is dangerous. What’s more, the pace of world change and its ever-increasing distractions make working safely 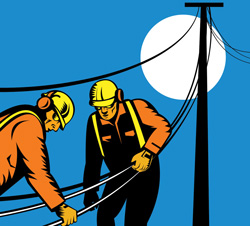 in the electric power industry even more challenging. The problem requires new thinking to improve the ranking of power line worker on the scale of most dangerous professions.

I share these concepts in my workshop on power line worker safety, Get to Know Your Brain for Safety’s Sake.

Change is happening faster than during any other time in history, and the impact on thinking is profound. We barely have time to think about something before the next new technology or way of doing something is upon us. World change often is characterized as a movement from linear to system thinking (see Figure 1).

Specifically, linear thinking accepts that problems exist and there are logical yes and no solutions.

Systems thinking recognizes the world is not logical; it is messy, full of ambiguity and rejects that problems simply exist. Systems thinking identifies humans as the common factor in all problems and suggests more than one right answer exists. Therefore, fixes to problems require thinking at a different level that includes approaches to problems. With reference to systems thinking, “The Art of System Thinking” author Joseph O’Connor and several others use the term “fuzzy logic” to refer to thinking that embraces “maybe” and “perhaps” in an attempt to understand what is happening.

Maybe and perhaps thinking involves questioning, and when questions are directed at us, we don’t like it. Human default behavior is to avoid situations that might immerse them in self-examination because exposure could be embarrassing, threatening or both. Researchers such as “On Organizational Learning” author and Harvard professor Chris Argyris remind us that avoiding self-examination stems from the primal brain that is always on the lookout for threats. Paradoxically, owning one’s behavior by accepting constructive critique is fundamental to learning, adapting to change and growing intellectually.

If our primal brain’s desire to hinder learning is not enough of a challenge, consider three other major distracters to thinking:

Choice. We have distractions in every part of our lives from the features on our cell phone to the type of bread we prefer. With choice comes the need to think, but we often don’t think because another distraction is upon us. So we relegate decisions to our quick/responsive brain (see Figure 2).

Technology. Technology is increasing the speed by which we work. In the communications realm, we can Google something and have our answer in seconds. Unfortunately, technology continually nudges us to keep up with the pace of change by working faster. The result is distractions in relationships and work.

Default. As mentioned, we humans come pre-wired to think of ourselves first. Our egocentric ways were crucial for survival in early times but much less so today. Evolution has not caught up yet; we still have a proclivity to behave in ways that are fueled with competitive, me-first thinking.

An unscientific survey of utility line workers was conducted earlier this year to further bore out the need for new thinking. Only one response was related to individual thinking. The others were related to things such as personal protective equipment, talk about the safety aspects and discussions about whether the work involves energized circuits. What’s more, a check of several line apprenticeship schools revealed curriculums that include courses such as introduction to climbing and transformer banking, but no mention of personal safety. As the adage points out, “Insanity: doing the same thing over and over again and expecting different results.” In like fashion, we cannot expect the safety of power line workers to improve using traditional thinking regarding training and education practice.

When workers are distracted, they are at high risk because what they think they can do is hijacked by the primal brain’s desire for stimulus: threats, novelty and things that are pleasing. In my critical thinking workshops, I relate the responsive brain to a person’s arguing that his or her power bill cannot possibly be that high; it must be a meter malfunction. After being told it is highly unlikely that the power meter is incorrect, the customer goes ballistic (see Figure 3).

This is an example of our responsive brain’s hijacking our ability to think rationally because it senses a threat. Our responsive brain does this because our oldest brain is always on alert. Because of new experiences and fewer threats to our existence, we began to engage more with others and slowly became more civilized. This meant we needed our responsive brain less and a reflective brain more. (By the way, when a customer is hijacked by his or her primal brain as in the high-bill scenario, a good tactic for calming him or her down is to ask a thinking brain question, such as, “How long have you lived in this house?” and, “How many appliances do you have?”)

With an understanding that one’s reflective/thinking brain can and often is hijacked by the responsive brain, the challenge is to strive for balance. Put another way, can workers’ awareness of their thinking be improved to reduce accidents?

Yes, and the A/L Balance (see Figure 4) works to do exactly that.

The A/L Balance is modeled from the work of Amit Sood, an associate professor of medicine at the Mayo Clinic. The model provides a means for workers to develop a mental model of the gap between what one thinks he can achieve and what he actually can do. In brief, the model does this by relating the concept of balance between attention to one’s work vs. inattention, or thinking of other things.

Attention to our world means focusing strictly on what is in front of us. One can be so fixated on work that peripheral information is missed.

Living in our mind, for example, means relying on mental models only, overactive emotional brain, overconfidence (complacency) and egocentric behavior.

This is achieved by first raising awareness that behavior is a choice for which we have the capacity to change. This means we can defend against allowing one’s primal brain from dictating behavior. I worked on power lines in the ’70s with Sam, who further demonstrates how our primal brain works to create poor calibration between the thinking (attention to work) and responsive (living in mind) brain (see Figure 5).

Sam prided himself on climbing a pole in record speed using a rope as a scare strap that was not attached to his right D-ring in favor of just holding on, wore a tank top, and let everybody around know that he was on the job. Sam was full of himself, which is another way of saying his ego was in high gear. As such, Sam’s ego fueled his quick-to-respond primal brain. Sam’s behavior is similar to a caveman’s who had to be on the lookout for danger at all times.

A caveman’s strategy was to scare off potential enemies by inflating the chest or making loud noises. The problem in Sam’s case is we’re not living as Neanderthals did 500,000 years ago; we’re living in a civilized world. We don’t have to scare off others to acquire food and shelter. Sam’s feelings drove him to want to impress others. Luckily for Sam, his ego did not lead to an accident that day.

When our minds are exposed to new events and ways of doing things, a mental model is formed. Mental models are deeply held, stripped-down schematics of the world that limit us to familiar ways of thinking and acting. In Sam’s case, he did not have other mental models from which to draw. His behavior was hijacked by his primal brain, he was poorly calibrated, and he was an accident waiting to happen. If Sam had been exposed to the A/L Balance, he would have had increased ability to examine his behavior against the A/L Balance mental model: “I have control over how much attention I devote to my work vs. how much time I spend listening to my subconscious.”

I am gratified to know the workshop is making a difference in how line workers think as communicated by testimonials from graduates of the workshop.

“Our team embraced the content and message (Get to Know Your Brain for Safety’s Sake). Not only is the information our team absorbed extremely beneficial to us ” but the information is also critical to our continued development personally and professionally,” said Holly A. Shores, work package 3 safety coordinator at Burns & McDonnell Inc.

And Paul, a lineman at Wilson Power Line Construction Inc., gave the course another good review.

“It made a lot of sense to me,” he said. “Some of it I do, some was a real eye-opener. This information is applicable to everything you do in life, thanks.”

Change is all around us and manifested in our choices. Unfortunately, choice begets distraction and one’s ability to focus. Adaptation to this phenomenon requires changing one’s assumptions and point of view. Applying that old adage to the power line industry, we cannot expect to adapt and improve line worker safety without adapting our thinking. The A/L Balance provides a frame of reference for changing how one thinks about working safely by addressing the balance between one’s focus on work, attentions to world, and listening to one’s subconscious, living in mind. Most important, the A/L Balance is working and documented by testimonials.

Jim Walters is an ex-lineman and owner of Power of Learning Inc. He graduated from Saint Mary’s University of Minnesota with a doctorate of education in leadership. Reach him at jimw@poweroflearning.org or http://poweroflearning.org.