I wrote about disruptive events in February’s “From the Editor” letter, and I typically wouldn’t write about the same topic four months later. This week, however, has not been typical in Oklahoma. On May 20, only four days ago, a massive, killer tornado tore through Moore, a suburb of Oklahoma City. It was by far the worst of more than a dozen tornadoes reported in Oklahoma on May 19 and 20, and one of the worst on record anywhere. Several smaller tornadoes were reported in Northeast Oklahoma, the location of PennWell’s home office, but those tornados were inconsequential compared with the Moore tornado. The property destruction is terrible, but the deaths of 24 people, including 10 children, is heartbreaking. For days the local media has reported on little else, so it’s nearly impossible to forget about the devastation for even a short time.

I’ve included some photos from Moore that an editor from our office took the day after the tornado. I tried to find at least one photo from the more than 60 he shared that show a downed power line or broken power pole. It is impossible to tell a power pole from a window frame in all the broken debris. This is the landscape in which first responders, as well as the ordinary people who quickly became first responders, began their work. Employees of Oklahoma Gas and Electric Co. (OG&E), the utility that provides electricity and gas to the area, were there, too. OG&E field crews along with crews from utilities outside the area have worked around the clock to restore power. As of Friday, May 24, just more than 5,000 people remain without power. That is down from some 41,000 customers right after the tornado. OG&E expects to have power restored Sunday, May 26 to all customers in tornado-damaged areas that can accept electric service. That’s remarkable. 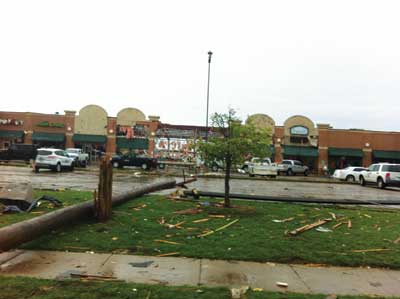 I’m sure OG&E’s outage management system, which is part of a smart grid initiative it implemented recently, made the job easier. And the customer-facing side of its initiative, which includes System Watch, a tool that reports outage restoration progress via website, smart phone or tablet, has been helpful, as have the company’s and employees’ Twitter posts. OG&E gets high marks for performing well and keeping customers in the loop.

Although it isn’t the first, just the latest, to be thrown into a terrible situation, OG&E and its dedicated employees deserve a shout-out for a job well done.