“It will make our grid more secure and more reliable, saving us some of the $150 billion we lose each year during power outages,” he said. “It will allow us to more effectively transport renewable energy generated in remote places to large population centers, so that a wind farm in rural South Dakota can power homes in Chicago. And by facilitating the creation of a clean energy economy, building this 21st-century energy infrastructure will help us lay a foundation for lasting growth and prosperity.”

The two largest of the ARRA initiatives are the Smart Grid Investment Grants (SGIGs) and the Smart Grid Demonstration Projects, which were authorized by the Energy Independence and Security Act of 2007 and modified by ARRA. The Recovery Act also provides $100 million for work force training, and there is a standards interoperability and cybersecurity program, as well. 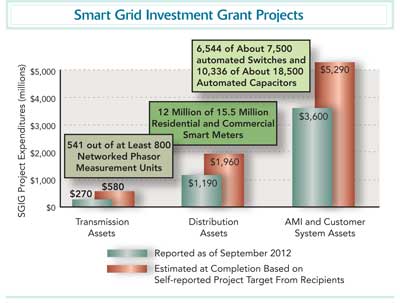 The $3.4 billion in SGIGs will be matched by industry funding for a total public-private investment worth some $8 billion, according to the Department of Energy (DOE). The DOE used a merit”based, competitive process to select and fund 99 projects that are deploying smart grid technologies and systems across the power grid from transmission systems to end”use customers in every state but Alaska, plus Washington, D.C., the Virgin Islands and Guam.

Joseph Paladino, a senior advisor at the DOE, gave a status update of the SGIG projects during the fourth annual Electric Light & Power Executive Conference in January. He said that as of September, the electric transmission systems projects, which include networked phasor measurement units (PMUs), line monitors and communication networks, had installed 541 of 800 networked PMUs—more than four times the number of networked PMUs that were installed in the U.S. before the SGIGs.

For the same period, electric distribution systems projects, which include automated sensors and controls for switches, capacitors and transformers, had installed 6,544 of some 7,500 automated switches and 10,336 of some 18,500 automated capacitors, Paladino said.

And advanced metering infrastructure (AMI) projects, which include smart meters, communications systems and meter data management systems, and customer systems projects, which include in-home displays (IHDs), programmable communicating thermostats (PCTs), Web portals and time-based rate programs, had installed 12 million of 15.5 million residential and commercial smart meters, which will more than double the number of smart meters installed before the program.

Among the SGIG projects, 62 are offering pricing and customer systems, mostly at pilot scales.

Twenty-five SGIG projects are deploying advanced VVD, Paladino said. Of those, 11 are applying conservation voltage reduction (CVR) to reduce peak load. He said one utility had up to a 200-MW reduction over hundreds of circuits. Seven are using CVR to reduce energy consumption. And there is a multitude of equipment integration and control schemes, of which many projects are applying distributed management systems and some are using smart meter data.

Investments in synchorphasor technology are being made by 12 projects, including the Midwest Independent System Operator (MISO), he said. MISO installed 161 synchrophasor measurement devices that are operating along the 50,000-mile interconnected system in the MISO 11-state region, he said. MISO is using system modeling to more accurately determine transfer limits on the system and after-the-fact event analysis to determine an accurate sequence of events and an accurate picture of how equipment responded, resulting in more timely and accurate evaluations of disturbances, Paladino said.

More information about ARRA smart grid projects may be found at http://smartgrid.gov.

The New York State Independent Operator (NYISO) and eight transmission-owning utilities have completed most of the power grid upgrades that are part of a statewide $75 million smart grid initiative supported by a Department of Energy (DOE) Smart Grid Investment Grant (SGIG) of $37.8 million.

New York’s smart grid initiative is designed to improve the efficiency of the state’s bulk grid, which consists of hundreds of generating units and thousands of miles of high-voltage transmission lines. The upgrades will enable the NYISO to better fulfill its core mission of maintaining reliability of the state’s bulk power system and operating economically efficient wholesale markets.

Final equipment installation work is scheduled to be completed in June.

The DOE provided SGIG grants to NYISO and other independent system operators, transmission companies and other utilities across the United States to install more than 800 networked phasor measurement units (PMUs) to help the country avoid future disturbances such as the 2003 Northeast regional blackout.

As the grant recipient and administrator for New York’s SGIG program, the NYISO has been working with the New York State Public Service Commission and the eight transmission owners to deploy 39 PMUs in the utilities’ respective operating regions to detect system vulnerabilities and avoid potential blackouts. The technology will relay system conditions at a rate of 60 times per second—360 times faster than previously available. As a result, the PMU network will improve grid operators’ ability to detect irregularities, predict problems and take corrective action to maintain reliability.

All 39 PMUs were installed by mid-March. The New York PMU network eventually will connect with networks in New England, the mid-Atlantic, the Midwest and Ontario, Canada. This will provide grid operators with broader situational awareness of grid conditions throughout the eastern United States and Canada.

New York’s SGIG program also supported the deployment of new capacitor banks. The capacitor banks are being installed at 234 locations across New York to improve the control and coordination of voltage on the New York power grid. These capacitors will improve the efficiency of the bulk transmission system by reducing the amount of electricity lost when carried over long distances, thus reducing electricity costs in New York by some $7.6 million per year.

Ideal voltage levels cannot be maintained on many transmission lines, which creates operating inefficiencies. As a result, power is lost in transit because of the extra effort required to overcome the reactance on the lines. Generators typically provide voltage support to maintain a line’s voltage, but there are locations on the grid where no generators exist or are expected to be sited. Thus, installing capacitors at these locations is the best way to provide voltage support and increase system efficiency.

The new phasor data concentrators (PDCs) will receive and synchronize phasor data from multiple PMUs to produce a real-time, time-aligned output data stream. PDCs can exchange phasor data with PDCs at other locations. Through the use of multiple PDCs, multiple layers of concentration can be implemented within an individual synchrophasor data system.

Following completion of the equipment installation, the NYISO will continue to report to the DOE on the results of the SGIG projects for an additional two years.