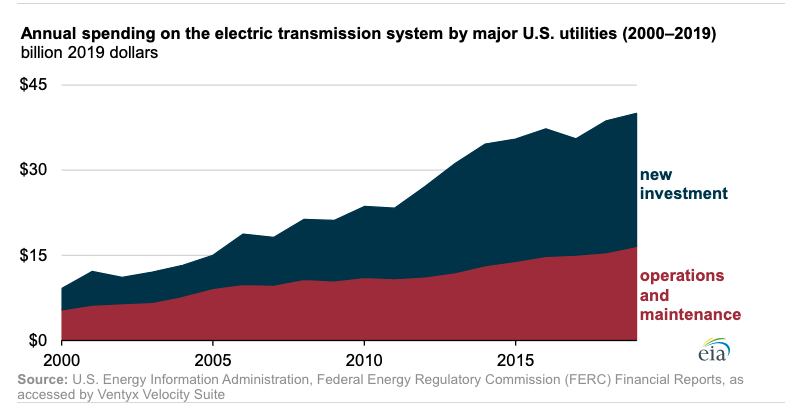 Based on information compiled from reports to the Federal Energy Regulatory Commission (FERC), spending is leveling off but still rose 3% from 2018 to 2019. Of the $40.0 billion that major utilities spent in 2019, $23.5 billion was on new transmission investment, a 1% increase over the previous year. Utilities spent $16.6 billion on transmission system operations and maintenance (O&M) in 2019, 7% more than in 2018.

Most new transmission investment has been on substation equipment, poles, and overhead power lines. These investments replaced aging infrastructure, enhanced grid reliability and resilience during extreme weather events, reduced congestion, and connected to renewable resources. Some recently completed and ongoing major projects include:

In March 2020, FERC proposed to revise its electric transmission incentive policy to stimulate the development of transmission infrastructure needed to support the nation’s evolving renewable generation resource mix, technological innovation, and shifts in load patterns. Transmission incentives, currently based on the risks and challenges faced by a particular transmission project, would be contingent on the expected benefits provided to consumers.

The principal contributor on the EIA report was Lori Aniti

Distribution Automation and Outage Management are the topics for our May 2021 DISTRIBUTECH+ educational series. Learn more.