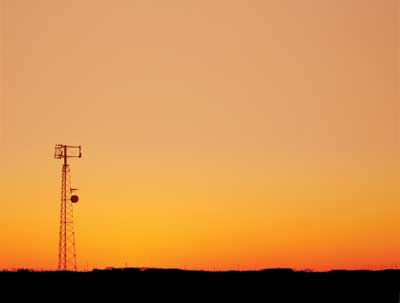 A smart grid cannot function without a digital communications network. For example, with the advent of smart metering or advanced metering infrastructure (AMI), utilities had to provide an architecture for automated, two-way communication between the meter and their head-end systems to benefit from applications that could take advantage of real-time data about energy consumption.

Although outfitting homes with smart meters has provided benefits, meters alone cannot provide actionable visibility into the distribution portion of the network where, according to the Edison Electric Institute (EEI), more than 90 percent of outages occur.

The distribution network spans more than 6 million miles in the U.S. and has remained largely unmonitored. Aging, unmonitored substation transformers and feeder equipment are two of the biggest challenges that threaten electric grid reliability in the U.S. and around the world. For example, in many utility networks, it is common to have as much as 70 percent of substation transformers unmonitored. This is primarily because the two traditional methods for rolling out a communication network —fiber or radio frequency (RF) mesh networks—have been too costly for most utilities to deploy ubiquitously. Without the ability to get real-time situational awareness data back from distribution automation applications, it becomes increasingly challenging to improve reliability and restore power faster.

Similar to how smart meters pull data back from the low-voltage grid, this new generation of smart grid sensors is purpose-built for the distribution network and affordable enough to deploy networkwide to solve various distribution automation applications. Whether deployed at the substation, sectionalizing a feeder or installed behind noncommunicating assets such as hydraulic reclosers, these communicating sensors can bring back the valuable data utilities need to improve reliability and grid efficiency while reducing operational expenses.

One of the critical components of grid modernization is a reliable, affordable communications network with enough bandwidth to send real-time grid data to back-office systems and to cover the 6 million miles of distribution network where visibility is lacking.

By using today’s ubiquitous cellular networks as the communications layer for grid modernization, automating the distribution network can be an affordable reality for the first time.

Before cellular networks became a viable option, utilities had one choice in building a communications layer across the distribution network: creating their own private wireless networks. To accomplish this, utilities traditionally turned to:

Both efforts require utilities to become experts at building and supporting their own wireless infrastructure, which has been costly and complicated.

With the availability of smart grid sensors with built-in cellular capabilities and ubiquitous 3G wireless coverage, utilities can leverage the cellular network to modernize their grid at a lower overall total cost of ownership. In addition to more ubiquitous coverage, a technology comparison by Qualcomm found cellular networks also have the added benefit of higher data rates, lower message latency and better reliability (see Figure 1). They also have built-in carrier-grade design, support, maintenance and security to better protect the grid from the looming cybersecurity threats that could plague many utilities if they had to secure these networks on their own. In addition, with cellular embedded in the sensor, there is nothing else to hang on the pole, which eliminates time and maintenance expenses compared with noncellular alternatives. 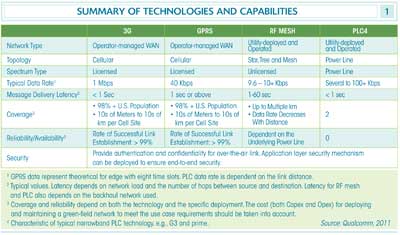 Smart grid sensors not only integrate cellular communications but also offer a pre-bundled, multiyear cellular data plan. For utilities that are flexible in carrier choice and want a turnkey activation and provisioning, the pre-bundled option takes all the guesswork out of cellular data costs and offers one of the lowest price points per sensor available in the industry. This could be an attractive option for utilities that would prefer to capitalize the cost of data plans. There is no need to roll fiber to a substation, and there are no complex wireless networks to test, architect and secure. Cellular-enabled smart grid sensors can be installed on the distribution line in less than five minutes. The sensors power up inductively (e.g., without batteries), self-activate onto the secured cellular network and immediately begin sending real-time grid health data back to the utility’s operations center to support applications including:

Key measurements and functionality include:

When an event is detected, waveforms of that event are captured along with background information (e.g., GPS location and time). This is communicated over a wireless network back to the sensor management system software in a utility’s operations center. The system classifies faults and disturbances that do not cause immediate outages in an effort to build intelligence about what might cause a future power failure. For example, incidents like momentaries or line disturbances are categorized and can be filtered to show trends across a circuit or during certain times of the year. The use of analytics is critical to ensure data accuracy. In head-to-head field trials, older-generation fault current indicators (FCIs) generated as many as four false alarms to every true outage event confirmed by these cellular-enabled smart grid sensors. Utilities can integrate this data from smart grid sensors and FCIs with other back-end systems such as data historians, outage management systems and distribution management systems for a much broader picture of the state of their infrastructure.

The use of cellular-communicating smart grid sensors at the substation is a game changer in cost and scalability. The cost of replacing substation transformers after they fail unexpectedly in the field is dramatically more expensive than refurbishing the asset. By having cellular smart grid sensors that are hot stick deployable at the substation, there is no need to roll fiber, de-energize substations or rewire conductor. Configurable alarms and reports allow utilities to know when transformers are being stressed by overloading or are in danger of aging prematurely because of unbalanced load.

This enables utilities to gain real-time visibility into their unmonitored substations and other parts of their distribution grid to keep an eye on aging or stressed assets without having to install costly backhaul communications.

Cellular smart grid sensors are a dramatic operational expense-reduction tool in rural environments where crews have long drive times to substations or long, circuitous feeders. Minimizing truck rolls and crew time in the field can have a huge financial impact, removing operational costs and allowing utilities to deliver safe, affordable and reliable energy. 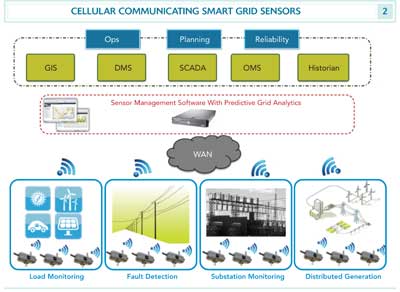 The opportunity for cellular is not just a phenomenon in North America. GSM cellular sensors are taking off in Europe and Latin America, as well. Utilities in these countries are retrofitting their current grid infrastructure by deploying sensors that leverage cellular networks and finding they can respond better to the operational status of the grid to improve reliability, monitor distributed generation and restore power faster.

Why is Now the Time for Cellular-enabled Distribution Automation Equipment?

Smart meters alone can’t identify failure locations in the distribution portion of a network, and the information from smart meters cannot solve the next generation of distribution automation challenges on their own. By allowing utilities to take advantage of cellular-enabled smart grid sensors, they can affordably pinpoint problems that cause most outages. As better outage-location information and fault data comes into their back-office systems, utilities can focus their repair efforts on faster, safer restoration. Finally, by taking advantage of built-in carrier grade security enabled within the cellular network, utilities can have an added layer of protection against cyberattacks. In the U.S, this adds up to big savings for utilities, consumers and businesses that can take advantage of a more reliable power grid.

Erik T. Christian is vice president of smart grid at Tollgrade Communications. Reach him at echristian@tollgrade.com.