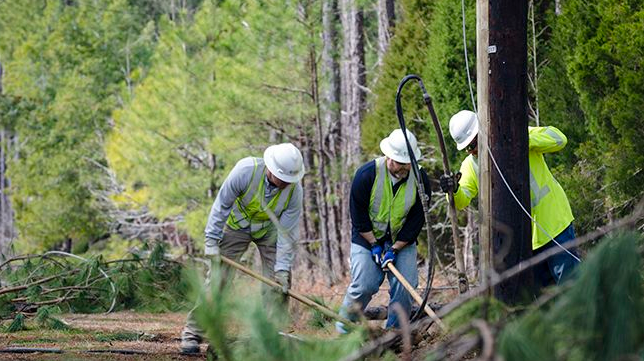 The cleanup and rebuild of the southeastern U.S. after Hurricane Irma will take weeks and maybe months, but electric utilities in the region are getting closer to full restoration, each reported Wednesday.

Crews for Florida Power & Light (FPL), Georgia Power and Duke Energy—along with hundreds of visiting linemen and helpers from other utilities—are moving safely but quickly to reconnect power in the affected states. More than 6 million customers overall lost power when Irma swept through.

FPL’s Twitter feed updated Wednesday morning reported that nearly 60 percent, or 2.5 million, of the 4.4 million customers who lost power are already reconnected.  FPL was “restoring at a pace of roughly 4:1 faster than Wilma in 2004,” the company tweeted at about 8 a.m.

Georgia Power, meanwhile, reported that it had restored power to about 590,000 customers in the last 24 hours. More than 400,000 of those were just on Tuesday, according to the utility.

Duke Energy has service territory in Florida and both Carolinas, all affected by Irma. Its Carolinas unit expected to restore power to all of those customers by late Friday, which includes more than 160,000 customers restored so far.

The damage, of course, was worst where it hit first—Florida. Duke had reconnected some 515,000 customers in that state by Wednesday morning, but another estimated 878,000 were still powerless.

The most affected were Pinellas and Orange counties, where a combined 400,000 lost service when Irma hit. Nearly 300,000 of those had been restored.

All of the utilities are employing thousands of workers to deal with the evaluation and restoration efforts. FPL alone has deployed more than 17,000 who have come from all over the country.